The story that has attracted tens of thousands of internet-users to the support of the Real Whitby Magazine newsblog has finally made it to the inside pages of the Whitby Gazette.

The first four paragraphs deliver a superficial description of the letters and emails sent out by SBC’s Head of Legal, Lisa DIXON, threatening legal action (both civil and criminal) against Real Whitby and its major contributors, and threatening to close down the site unless every single reference to Scarborough Borough Council was removed within seven days. That was on the 28th March 2013 – fourteen days ago . . .

“As a result, the website contains malicious, untrue and defamatory material in relation to which the subjects of the statements made have been denied the right to comment until after publication, if at all.”

This is untrue. SBC has been notified time and again that the right to publish all or any correspondence is reserved, opportunities to comment have been offered and ignored (remember my question to SBC Leader Councillor Tom FOX regarding the Council’s plans for ex-Mayor Peter JACONELLI?), and all elected members and paid public servants enjoy the same opportunity to comment on articles as other readers. Lisa DIXON needs to get her facts straight.

And by the way, there is no obligation on investigative-journalists to solicit comments from the subjects of their exposés – which probably explains why the Gazette did not approach Real Whitby for a comment in their article.

The Gazette article makes no mention of the ensuing thrust and counterthrust of correspondence, Formal Complaints and FOIA requests for information, reported in detail on Real Whitby – nor of the fact that the SBC Cabinet appears to have compromised itself (Formal Complaints have been lodged) by disregarding rules requiring the disclosure of personal interests and prejudices against Real Whitby  that should have barred them from taking part in the decision-making process. Thus, the legality of Lisa DIXON’s actions remains uncertain.

Quoting Councillor Ian HAVELOCK, the Gazette goes on to report:

Coun Ian Havelock proposed a motion that WTC “deplores” the use of SBC’s legal department to restrict the right of individual electors and residents to freedom of speech and to publish comments concerning the business of SBC.

He said: “The letter was extremely threatening. It has clearly touched a nerve and there is a lot of things I feel they (Real Whitby) were justified in bringing to the attention of the public.”

“My stance is that I am a staunch supporter of freedom of speech. I may not like what somebody says but I will defend their right to say it”.

This voice of reason was followed by a member of the public, Colin WINSPEAR, who said he was pursuing his own defamation case against Real Whitby. Like Lisa DIXON before him, he did not particularise. He did say, we are told, that it was hypocritical of Real Whitby to seek backing from the Town (Parish) Council when articles have been about the town council in the past.

It is true that some Real Whitby articles have been about the Whitby Town (Parish) Council, its Members and Clerks. Many of them (but not by any means all) have been highly critical – and with good reason – but what that has to do with the motion before the Council, readers will have to ask Mr Colin WINSPEAR to explain.

The motion, remember, was this:

This Council deplores the use of: Scarborough Borough Council Legal and Support Services in order to:

1. Restrict the right of individual electors and residents to freedom of speech

2. Restrict the right of individual electors and residents to publish both opinions and comment concerning the business of SBC

No reference to Real Whitby there, but apparently not everyone at the meeting could see past their personal prejudice.

The issue before Council was the right of electors and residents to freedom of speech, which in fact is already enshrined in, and guaranteed by, Article 19 of the Universal Declaration of Human Rights 1948, which has been ratified by the United Nations and its member states, but has apparently been abandoned by ten members of the Whitby Town (Parish) Council – one of whom actually voted against and nine of whom found the courage of their convictions and – abstained. I commend to them the words of Edmund BURKE:

“All tyranny needs to gain a foothold is for people of good conscience to remain silent.”

However, despite this extraordinary failure to grasp nettle – or even the issue, the motion was carried on a vote, with a majority of five in favour, to one against.  (83.3% in favour)

With that ringing endorsement, we will continue to:

Thank you for your continued and fast-growing support. 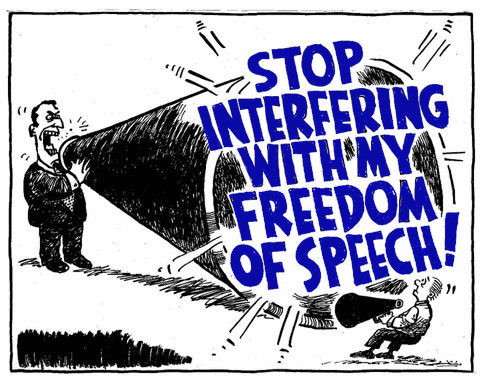