Events surrounding the bitter dispute over of the imposition of a 1.5% levy on businesses with a RV of over £12K have been covered in the following recent  articles:

I am now privy to concerns expressed by elected members regarding the prudence of continuing to convene Council meetings (which must, by law, be open to press and public). Naturally, these elected members are fully aware of the fact that the Audit Committee is scheduled to meet at 2:00pm on Thursday 19th March 2020, and electoral investigator Mr Peter STANYON is scheduled to traverse the country to attend and present his report and respond to questions. One hopes that he will be well enough to meet that challenge.

Readers will be acutely aware that the government has strenuously urged the public not to attend large gatherings.

But with an estimated 300 businesses in the Borough of Scarborough robustly refusing to pay the levy, a large public gallery can be anticipated. Diligent Councillors have been questioning the wisdom of convening a heavily-attended Audit Committee at this worrying time – in direct contravention of government urgings. No clear response . . .

On 25th March 2020, East Riding Magistrates’ Court will hear the adjourned Summonses standing against thirty-eight levy refuseniks in the East Riding of Yorkshire, where a similarly substantial public gallery is anticipated.

One of those thirty-eight has expressed his concern to the Court that the authorities are risking flying in the face of government advice:

“I am lead to believe that a large number of supporters/ protesters are expected to attend the Court on that day so it may, therefore, be prudent to move the adjourned hearing to a larger Court room.
Given the government’s advice in respect of large gatherings during the present Covid-19 crisis and being mindful of the public health situation, the Court may wish to consider the wisdom of holding the hearing on the appointed date.”

The response from the Court was prompt and concise:

“I have received a response from the head of the legal team, he is of the view that the case will proceed as planned and there will be no adjournment.”

No reference to the size of the courtroom and the likely close proximity of those in the public gallery who may, presumably, infect one another to their hearts’ content. Duty of Care?

I have some personal experience of Scarborough Borough Council’s stance on public health issues.

In June 2010, when the Swine Flu epidemic was threatening the postponement or abandonment of the Whitby in Shorts International Short Film Festival (of which I was Chair), I approached the then Leader of Scarborough Borough Council, Tom FOX, to establish what precautionary/contingency plans the Council had prepared to safeguard the public, including our audiences and entrants travelling from as far abroad as Australia and Brazil to attend the Festival. The response was not encouraging:

“This Council has in place contingency plans in respect of any mass absence of its own staff through illness. This includes the prioritising of the services essential to be delivered no matter what.”

Ten years later, in March 2020, as the Coronavirus pandemic caused unprecedented public health concerns, SBC’s commitment is still focussed on its own staff (according to this in-house guidance passed to the Enquirer):

“The guidance below is for all employees who have concerns regarding coronavirus. There is also general information available on the Council’s intranet (or through your line manager) with the current situation with regard to coronavirus including links to the latest advice and information from Public Health England (PHE).”

Once again, elected members and members of the public are left to their own devices – unless taken ill in the Town Hall (in which case, a fellow member may be called upon to administer first aid). I would like to show the video – but it mysteriously vanished into the either and the man in charge mysteriously went off on leave. Openness and transparency in its purest form?

SBC Leader Councillor Steve SIDDONS [Lab.] chastised Councillor Bill CHATT [C.I.M.] for “sending the wrong message” to the public when he attended Full Council on 28th February 2020 wearing a mask and employing sanitising gel – but within a very short period of time, Councillor SIDDONS was himself in hospital and half the world was in lockdown. (I must add that I have no idea of Councillor SIDDONS’ present state of health; I have been unable to find out. It seems to be a state secret). Of course, Councillors are not immune. 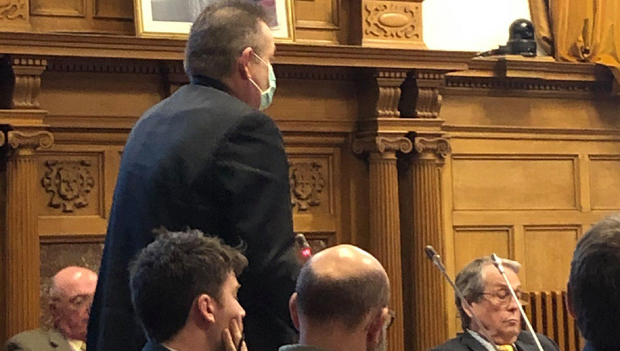 This entire sorry episode begins to resemble a sordid little soap opera – except that there is now a vitally serious side to it; the COVID-19 pandemic.

Businesses and staff – i.e. breadwinners, and therefore whole communities – are now facing the supreme challenge of trying to survive in the most dire of circumstances, unimaginable just a few weeks ago. Even with the relief from business rates, there can be no doubt that businesses will struggle – plenty will fail – because footfall will be reduced to a mere fraction of its former level. The tourist season? Forget it. Businesses will be on the bones of their collective ass. Verily.

If the Yorkshire Coast BID is unable to come up with substantial and effective support, it may as well pick up its money, pack up its tent and accept that it is not needed, it is not wanted (never was) and it is not going to succeed in sucking the life’s blood out of our Borough. On yer bike, BID. Just sod off.

But the likelihood is that we shall see a Town Hall ‘Lockdown’.

The likelihood is that the Audit Committee meeting will be postponed, indefinitely, and the can will thus be kicked further down the road until the objectors hopefully lose the will to live – or have simply become ‘collateral damage’ in  the establishment’s continuing failure to serve the people well. That’s public service for you. Dire.

I had barely written that final paragraph when a flurry of identical emails dropped into my in-tray:

Today’s meeting of the Standards Committee has apparently been cancelled . . .

It is important to keep staff safe, right?