You can dispel any lingering doubts, if indeed any can remain after NYE’s comprehensive demolition of Mr Dillon’s assertion that he has the powers under the Council’s Constitution to disbar an elected member on the grounds of safety, thus bypassing the Standards procedures:

When Cardiff City Council published their briefing to all members on the implications of the Harvey v. Ledbury case, they conclude on that very point:

“Notwithstanding this judgment, it is clear that local authorities must continue to be mindful of their responsibilities to protect their employees from bullying, intimidation and harassment, since the authority may be liable for the actions of its councillors (this was established in the case of Moores v Bude-Stratton Town Council [2000] EAT 313/99). However, the proper course for the investigation of behaviour of councillors is under the Code of Conduct and the statutory standards framework; and authorities must ensure that any hearing is fair and any informal action is proportionate in all the circumstances of the case.”

This speaks directly to Mr Dillon’s argument that the Council has the responsibility to protect staff, members and the public. No-one would argue otherwise.

That responsibility does not imply or confer  absolute power. SBCs Constitution states in its very first provision:

The Council will exercise all its powers and duties in accordance with the law and this Constitution.

All the powers exercised must be in accordance with the law.

No provision of the Constitution can override or amend primary legislation.

In this case, when dealing with the conduct of any member – including any safety or security considerations – the law is contained

in the Localism Act 2011, as confirmed by every legal expert commenting on the High Court ruling.

Even in the circumstances described by Mr. Dillon, and so succinctly expressed by Cardiff City Council’s Director of Governance & Legal Services and Monitoring Officer…

“…the proper course for the investigation of behaviour of councillors is

under the Code of Conduct and the statutory standards framework”

Allegations of unlawful behaviour are dealt with through criminal law and the courts.

Whatever it is that a Councillor stands accused of, is covered by this legal framework. There are no gaps, no category of behaviour or wrongdoing by a Councillor which cannot be dealt with under this legal framework. Parliament is not so incompetent that it requires the superior intellect and vision of Mr. Dillon to step in to cover its omissions.

There is no indiscretion of any kind by a Councillor that requires special interventions by any Chief Executive.

The only actions that can lawfully be pursued are through the Standards regime – or the police. Nothing else.

6. A relevant authority other than a parish council must have in place—

(b ) arrangements under which decisions on allegations can be made.

Mr Dillon must act within the law in exercising any powers he has under the constitution. He can do nothing other than follow the Council’s adopted procedure for investigating allegations and determining an outcome of those allegations.

Councillors are entirely justified in asking what process was followed by Mr Dillon, because if his actions are not within the law then whatever legal authority he claims to have simply does not exist.

What further undermines Mr. Dillon’s case is that he began by attempting to follow the correct procedure, albeit with his own fictional process additional to, and running in parallel to, the lawfully correct procedure.

The proper course of action was then taken and the matter was dealt with by the proper authorities and properly concluded.

It was only afterwards that Mr Dillon imposed his disbarment.

This does not appear to have been good enough for Mr Dillon. It was only after the police determined not charge Cllr Donohue-Moncrieff that Mr Dillon autonomously imposed his full disbarment.

He has tried, convicted and sentenced in a case already investigated and concluded under the law. This has been an entirely parallel process, neither under the Standards Regime nor by due legal process

Again, Cardiff is helpful in explaining the High Court ruling:

This case makes clear that a council cannot run a grievance procedure against a councillor alongside, or as an alternative to, a standards regime procedure, and that complaints regarding a councillor’s conduct have to be dealt with under the authority’s standards arrangements.

Let us for a moment consider that Mr Dillon’s double jeopardy case is by some extravagant stretch of the imagination legitimate and the procedure lawful. Quite a stretch, but bear with me; it is necessary in order to make a valid point.

Cardiff’s briefing includes another significant legal requirement set out by the High Court; that of natural justice.

Thanks once again to Cardiff for the following explanation of the Judge’s ruling:

It also provides a reminder that any process must be fair and in accordance with the principles of natural justice, i.e. the right to a fair hearing by an unbiased and impartial body requires that individuals should have been given prior notice of the allegations made against them, a fair opportunity to answer them, and the opportunity to present their own side of the story. The right to a fair hearing is also guaranteed by Art.6(1) European Convention on Human Rights, which complements the common law rather than replaces it.

Again, we know that there was no investigation and no hearing  (at least not one in which the accused Councillor was in any way involved), nor with the allegations clearly set out and evidence transparently presented. A ‘guilty’ judgement was made by Mr Dillon and the sentence summarily imposed.

[Note: JD’s legal advisers assert that the disbarment is not a sanction; only a Standards Committee can impose a sanction.]

This Councillor’s case is therefore outside the scope of the Harvey v. Ledbury Judgment.

I struggle for the correct term to describe Mr Dillon’s present action, so let’s use ‘sentence’.

We also know (Mr Dillon has informed us) that the Councillor’s ‘sentence’ is constantly under review.

But the sanction/sentence was reviewed and in fact, increased to total disbarment even from Council Meetings.

Again, there was no further hearing, no evidence presented, no accusation set out and neither defence allowed nor witnesses called. Nothing. One man’s whim.

Indeed, the whole notion of natural justice on which our law is based was utterly and completely disregarded.

This being the case, the process is unlawful and so, therefore, is the Chief Executive’s action.

And we have yet to consider the Human Rights implications; disability and discrimination – the correct application of which also renders Mr Dillon’s actions unlawful.

Unlawful actions are not supported by the Constitution. It follows, therefore, that Mr Dillon’s stated defence that his actions are lawful because he holds powers under the Constitution is utter nonsense. Those powers exist only when acting lawfully. 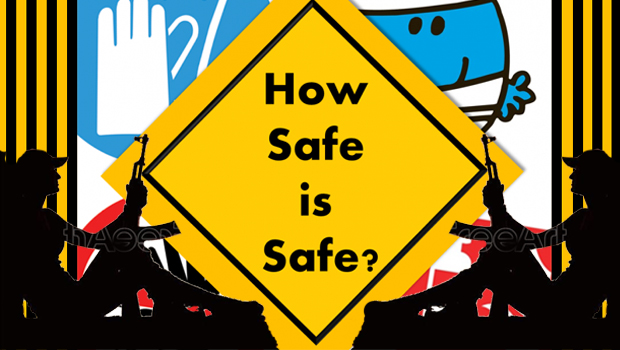