A Letter to the Editor from Rita HOLMES, of Scarborough, who writes to apprise readers of an apparent breach of a little-known restrictive covenant in connection with a contract between Benchmark and Scarborough Borough Council.
~~~~~

Dear Editor,
PUBLIC OPEN SPACE NORTH OF THE WATER PARK – TITLE NO. NYK278751
This large area of cliff top formerly part of the Burniston Road Barracks was landscaped as a planning condition by Persimmon and Tay Homes.  In April 2003 the title was transferred to Scarborough Borough Council with a restrictive covenant “not to use the Property for any purpose other than a public open space under the provisions of the Open Spaces Act 1906 or any statutory re-enactment or modification thereof”. Included in the title were four other areas within the development.  The Open Spaces Act 1906 requires that land be maintained in a good order.
It was maintained by the Parks Department regularly cut, shrubs trimmed etc. until 2015.  Enquiries revealed that the Leader of the Council, Councillor Tom Fox, had given the Public Open Space to his friend Roland Duce of Benchmark free of charge.
In April 2016 several residents had a meeting with Anton Hoefter and Roland Duce with his team to discuss problems arising from the Water Park development and its future operation.  I questioned Mr. Duce on his 125 year Licence for the Public Open Space and if he was aware of the restrictive covenant requiring the area to be maintained.  His reply was to the negative and he was not prepared to do any maintenance whatsoever and would rescind the Licence.
Following extensive correspondence with Mr. Chris Bourne and Mrs. Lisa Dixon, the matter was referred to the Local Government Ombudsman.
Scarborough Borough Council’s statement to the Ombudsman to support their actions included:
a) deal done at a private leader’s meeting in April 2014 to agree terms on the financial viability the £9m loan to Benchmark.  Minutes private and confidential.
b) delegated authority given to Leader to complete terms of £9m loan approved at Council meeting in September 2013
c) the development was “at risk” if this public open space did not pass to Roland Duce
d) planning condition 18 of decision 11/01844/FL required an ecological management plan for protected species I.e. great crested newts.  It was stated Natural England required this particular area as a GCN mitigation area
e) the grass would still be cut but less frequently, the shrub beds trimmed, litter picked twice weekly in summer and once weekly in winter. Maintenance would not fall on the Council tax payer
Let’s examine their submission:

(a) and (b) this land is not part of the Sands development so no authority given by Council to enter into this agreement. There is a procedure for dealing with public open spaces which has not been followed
(c) why would the development be at risk?  Did Roland Duce assisted by Councillor Fox see potential building land worth several millions of pounds with its stunning sea views
(d)  Condition 18 had already been discharged in February 2014 by the planning authority to the satisfaction of Natural England without the inclusion of the public open space. Their statement was false and later admitted to the Ombudsman that no records were available to support their statement that this particular piece of land should be a newt mitigation area
(e) grass has not been cut as stated, some areas have been allowed to grow for two years and has become a wasteland, none of the shrub beds trimmed and no litter picking.
Recent correspondence from Mrs. Lisa Dixon states they are satisfied that maintenance has been carried out.
Finally, I received a letter dated 5th September 2017 from the Chief Executive Officer, Mr. Jim Dillon as follows:-
Title No, NY278751 – Public Open Space
“I acknowledge receipt of your letter dated 25 August. However, as mentioned in Chris Bourne’s e-mail to you dated 27 June 2017 (a hard copy of which is enclosed) neither Councillors or Officers of the Council will enter into any further correspondence with you on this matter”.
My complaint to the Local Government Ombudsman was not upheld – (a) contents of the private minutes were unable to be viewed and (b) Natural England were falsely used to justify the 125 year Licence with Benchmark for management of the land c) SBC stated the land would be maintained.
Scarborough Borough Council are in breach of the restrictive covenant, their continuous justification for the area to be a mitigation area for great crested newts is farcical. Benchmark have not complied with the planning condition relating to the Ecological Management Plan. Where are the two new ponds for newts next to the railway line, the bat boxes, the gates to allow badgers free movement and the planting of more trees to replace approximately fifty mature trees pulled out by the contractors?  What remains is a wasteland with a metal construction fencing to the south which has caused the death of a deer in the last two weeks.
Scarborough Borough Council officers and Cabinet members are failing the residents and visitors to this area.  Development to complete the Sands scheme is at a standstill and will be for many years a blot on the landscape. The Licence should be rescinded and maintenance taken back by the Council’s Parks department.
I thank NYEnquirer for providing a platform to expose Scarborough Borough Council’s actions in the North Bay and inform all Council members not privy to Cabinet reports and minutes and members of the public who are unaware of the method used to give away a valuable public open space.
Yours, etc
Rita Holmes
Rita HOLMES, Scarborough. 5th November, 2017. 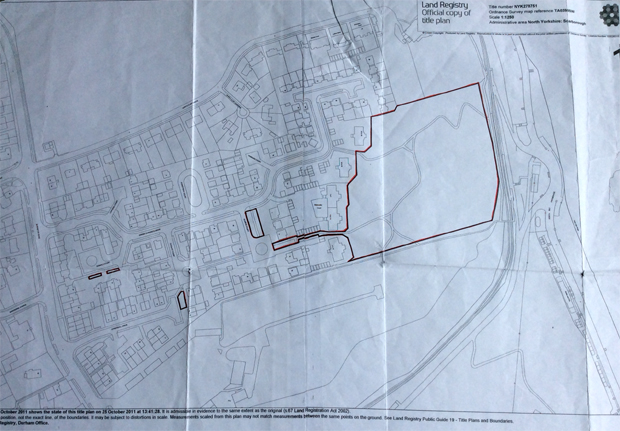 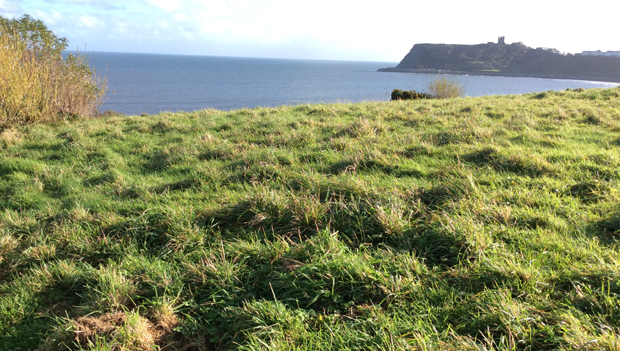