There have been a number of successes recently for regular NYE contributor Chris Clark.

Chris is a retired Police Intelligence Officer with twenty-eight years’ service. In retirement, he has pursued his interest in unsolved cases. He has co-authored a book “The Face of Evil” – the true story of serial killer Robert Black. He is currently working on a book investigating the “Hammersmith Nude Murders” of 1964 to 1965. He co-authored the book “Yorkshire Ripper – the Secret Murders” (with award winning investigative journalist Tim Tate), which was reviewed in the NYE by Tim Hicks (Review here). For more information on Chris, please see his website here.

Chris and I have been working on a series of articles for the NYE on unsolved murders associated with convicted serial killers Yorkshire Ripper Peter Sutcliffe and Christopher John Halliwell.

Chris and I have also been covering other stories and each has a series of individual investigations on-going at any one time. One of these is Chris’s investigation into the West Yorkshire murder and rapist John Taylor (pictured above), which has not been reported in the NYE until now, because his investigation was on-going.

The authors have written two articles on the crimes that have been attributed to Taylor, but for which he has not been convicted. The authors believe this is the best study from open sources currently available to the public.

John Taylor – The Beast of Bramley

West Yorkshire Police Corporate Communications Team has confirmed to the NYE that:

“Police investigating the death of Rebecca Hall in Bradford in 2001 have arrested a woman. The 37-year-old was arrested on suspicion of murder on Friday 4 January. She has been released under investigation. Active enquiries remain ongoing into this case”.

“Detective Superintendent Jim Griffiths of the Homicide and Major Enquiry Team, said: Donna Healey was last seen alive in 1988 but was not reported missing to police until almost a decade later in 1997. Her body had been found in 1991 but was not identified until 2004. A review was carried out into her death in 2003 and in 2013 but her death remains unexplained.

This is a tragic case and one for which a cause of death remains unknown. Donna’s mummified body was found dumped at the edge of the overgrown grounds of the then Falloden Nursing Home in Allerton Park, Chapel Allerton on January 15, 1991. We owe it to Donna to find out what happened to her.

We have been making extensive enquiries to establish the full circumstances of her death and this has included campaigns in the media. We believe the answer to Donna’s death lies in the Allerton Park area and it is very unlikely that the place her body was dumped was chosen at random. We believe whoever left Donna’s body there had a connection to that spot.

We are currently carrying out a new review into her death. This review is in its infancy and is looking at a number of potential lines of enquiry and I would appeal to anyone who has any information or suspicions about what happened to call police on 101 or the independent crime fighting charity, Crimestoppers in confidence on 0800 555111.

We would not name any individual who was or was not part of these initial enquiries but I would again urge anyone with information or suspicions to come forward to the investigation team.”

The murders of Yvonne Fitt, Lindsay Rimer and Deborah Wood remain unsolved and we would always appeal anyone with information about their deaths to come forward to bring their killers to justice. Our work has included campaigns in the media and our Major Investigation Review Team are currently re-investigating all three deaths with the aim of getting justice for all three victims and their families. We never close a case until it is solved so are therefore examining other historic West Yorkshire murders to see if there are any new lines we can take, any new evidence or any developments in forensic science that could help us bring people to justice.

We would never identify person or persons who were or were not the subject of any enquiries until they are at any point charged with any crime.

I would again like to take this opportunity to appeal for anyone with information about any of these deaths or any others in West Yorkshire to contact the Major Investigation Review Team on 101.

The passage of time does nothing to diminish our determination to bring the killers to justice and a case is never closed until someone is brought to justice.”

These cases have been linked to West Yorkshire murderer and rapist John Taylor in the media.

Chris specialises in solving murders and identifying suspicious disappearances that are in fact murders, then identifying if the modus operandi and geographical factors link the crimes to a serial killer.

Because he is an exceptionally experienced analyst, not operating under the sponsorship of any particular force, he can consider these factors on a national basis. This also allows him to be absolutely impartial and unaffected by individual police force politics, enabling him to speak out honestly if the original investigation into an unsolved murder missed something, or was bungled. This is the major advantage of having these crimes investigated by journalists, not serving policemen.

For some time Chris has been investigating West Yorkshire murderer and rapist John Taylor, who is currently serving two life sentences for the abduction and murder of sixteen year old schoolgirl Leanne Tiernan. This has led to some startling conclusions.

There are two murders featured in the above comment that Chris is not linking to Taylor.

Rebecca Hall went missing from Little Horton in Bradford on the 13th of April 2001 and her naked body was found two weeks later. She had been brutally beaten. Police believe that she was murdered on the day she went missing and her body kept elsewhere before deposition.

The case previously returned to the spotlight following the conviction in 2010 of Stephen Griffiths known as the Crossbow Cannibal. Serial killer Stephen Griffiths had admitted killing three missing Bradford sex workers but boasted that he had killed “loads more”.

Lindsay Jo Rimer was thirteen-years-old when she disappeared on 7th November 1994. On the 12th of April 1995 her body was found by two canal workers in the Rochdale Canal, about a mile upstream from Hebden Bridge. It was weighed down with a boulder. She had been strangled.

Chris and I have previously covered the murder of Lindsay Jo Rimer in this article. We remain satisfied that Christopher Halliwell should be considered as a suspect in her murder.

However, Chris’s analysis has led him to believe that Taylor should be considered as a suspect in the murders of:

He has now been quoted in the national and local media in his capacity as one of the leading cold case investigators in the UK. This is covered very well in this Yorkshire Evening Post article by Georgina Morris.

The start point of Chris’s analysis was the murder of Leanne Tiernan in November 2000.

Leanne Tiernan was abducted on Sunday the 26th of November 2000 whilst walking home along a short cut through a narrow wooded valley called Houghley Gill, in Bramley, near Leeds. Her body had been wrapped in a duvet and placed in a shallow grave but it had not been interred.

The Senior Investigating Officer on the case was Detective Superintendent Chris Gregg who has been described as one of the finest detectives West Yorkshire Police has ever had. He realised immediately that this was not a case of a runaway, designated it as a “Category A” incident and launched a massive search for Leanne. Nine months after her disappearance, a dog-walker discovered her body on 20th August 2001 at Lindley Woods, Otley, in the Yorkshire Dales. It had been at the deposition site for a few weeks. Prior to being dumped it had been stored in a cold, dry place. She had been strangled with a plastic cable tie.

The story of her abduction and an exceptionally determined and skilful investigation by West Yorkshire Police CID is told in this documentary. (I hope the police officers that follow my articles will not mind if I recommend that they watch it. It is a textbook example of a successful investigation by a very capable and well led team of detectives).

In 2002, Taylor was sentenced to life imprisonment for Leanne’s murder with the expectation that he would never released. Subsequently this was reduced to a minimum tariff of twenty years. 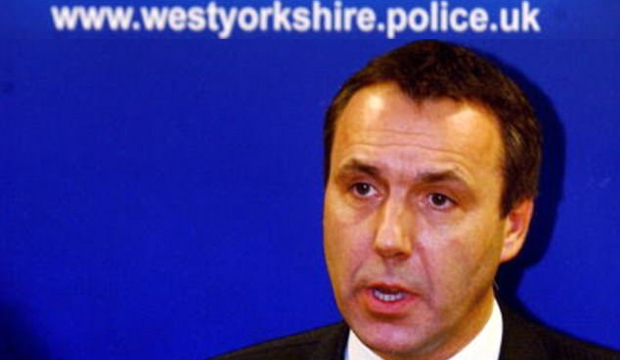 Detective Superintendent Gregg has been quoted as saying:

“We do not believe that this is the first major crime he has committed. We feel that the way this murder was pre-planned, and the way he hid and disposed of the body, was calculated. We cannot exclude the possibility he has killed before“.

John Taylor was born in 1956 in Leeds. He delivered parcels for  Parcelforce, kept dogs and was also a poacher. He had no convictions for violence and only one (as a youth) for theft. He enjoyed bondage and rough sex with his girlfriends.

In 2003, Taylor was sentenced to two additional life terms for two rapes committed in 1988 in Bramley. His first victim was also abducted from Houghley Gill; his second was raped in her own home which Taylor entered through an unlocked door.

Following these two convictions, Detective Superintendent Gregg revealed that a necklace found in Taylor’s car at the time of his 2001 arrest may have belonged to another victim as they were still unable to find out where it came from or who it belonged to. He is quoted in this Yorkshire Evening Post article by David Bruce as saying:

“We are still concerned that there may be other victims and families who have been affected by Taylor’s actions”.

Donna’s Healey was last seen alive in March 1988. Her mummified body was found in Allerton Park, Leeds in 1991. She was reported missing in 1997 and her body was only identified as a result of developments in DNA profiling in 2004.

The cause of death is not known.

It remains one of the great Yorkshire murder mysteries and is very well covered in this article by Lucy Thornton, in which Chris is quoted extensively. 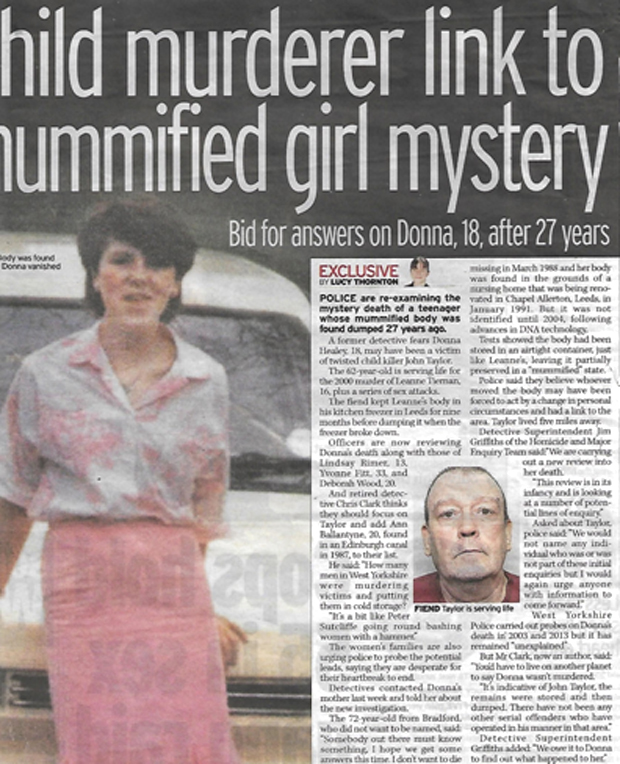 Why Chris believes Taylor should be a suspect in the murder of Donna Healey:

A single mother, aged 33, Yvonne was a prostitute in the Manningham area of Bradford, once a haunt of the Yorkshire Ripper for at least 10 years. Her body, was found in 1992, at Warren Point, Norwood Edge, near Otley, by a man collecting mushrooms. It was lying in a natural hollow close to a footpath. The cause of her death was multiple stab wounds.

Why Chris believes Taylor should be a suspect in the murder of Yvonne Fitt:

Deborah Wood disappeared after going drinking in a pub in Leeds City Centre on the 4th of January 1996. Her body was set on fire near Burley Park railway station, Leeds, on the 10th of January 1996. She was twenty years old. Her body had been kept in cold storage before being transported to the deposition site.

Why Chris believes Taylor should be a suspect in the murder of Deborah Wood:

If you have any information or suspicions about the above cases, please call West Yorkshire Police on 101 or the independent crime fighting charity, Crimestoppers in confidence on 0800 555111.

The author would like to thank the West Yorkshire Police Corporate Communications Team for their help and cooperation in writing this article.

The Beast of Bramley – 2: The Scottish cases

In our second article on Taylor, we will be covering seven murders in Scotland that Taylor has been connected to.