May I first take the time to compliment you on your letter to the North Yorks Enquirer? I found it to be very honest, open and interesting.

First of all a few rants:

As a taxpayer to NYCC and a disabled motorist who is unfortunate enough to live in a “residents’ parking zone”, or “cash-cow street”, as they are fondly known locally, and therefore also paying Vehicle Excise Duty (more tax) and “residents’ parking [if you’re so lucky] permit” charges (yet more tax) to use our wonderful roads, I wonder if you could ask those fortunate to be sitting in Northallerton’s ivory tower what exactly I’m getting for my money?

I have a Blue Badge (as I have mobility issues) which I’m sure your aware are not given lightly. Neither, for that matter, is PIP – which you need to obtain the Blue Badge. I live in a “Resident Parking Zone” yet, I’m often to be found, burning fuel, driving around for half-an-hour or more trying to find a parking space or double yellow line close enough to home to park in.

The problem in my area being this: users and staff of The Street (an NYCC facility) and workers and customers of the shops on North Marine Road, who won’t pay to park in the car park, so park in the nearest street, returning every 90 minutes to change the time clock! No point me phoning SBC as your given a reference number and a “Traffic Enforcement Officer” appears two days later and ignores the work van as the time clock is “in time”! I can’t get a Disabled Parking Bay as it’s in a Resident Parking Zone ,even though there is one Disabled Parking Bay further down for 3 disabled drivers. Surely these should be what they are called “Resident Parking Zones”?

NYCC pay £180,000, SBC pay £150,000 (or are my figures wrong?). NYCC then causes weeks of disruption resurfacing our “better” roads, neglecting our dangerous roads – all for the sake of vanity or lies to make Yorkshire look good on the Tour de Yorkshire route! We then get parking suspended from 18:00 Friday 4th to 22:00 Saturday the 5th (by the way, could somebody please inform either NYCC or SBC – or both – that they have wasted yet more money on the “Parking Suspension” signage; they are NOT enforceable in law as some idiot has printed 18:00am? 18:00 being 6pm not 6am) on the route, which just happens to be on one of the busiest weekends of the year and on one of our towns major B&B streets. 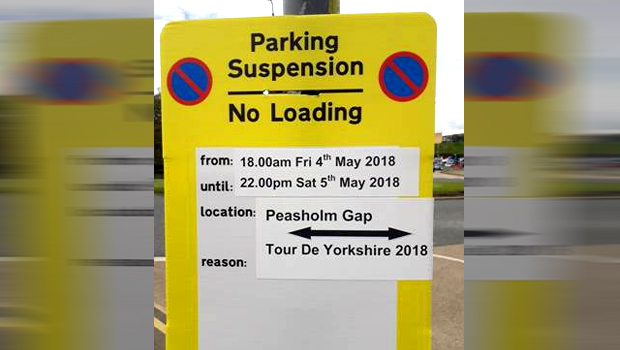 Where the hell are the B&B guests supposed to park? Oh, that’s right; on the nearest cash-cow street – which will no doubt be enforced by a glut of Traffic Enforcement Officers who will now be managing to walk the streets without holding hands!

Working on NYCC’s own pricing structure to repair Royal Albert Drive last year at a cost of £50,000. I estimate NYCC to have spent in the region of £700,000 on road repairs, just in Scarborough town alone. So what are the real figures – or is that a NYCC hush job?

As for what’s left of our other roads, I guess NYCC will have no money left for repairs, so cash-cow prices will naturally rise and sod the Duty of Care to maintain the roads to enable us fodder to travel down the “highway maintained at public expense” without “let or hindrance”, as we haven’t paid enough taxes to NYCC – which we can’t pay as were too busy paying to repair our cars to enable us to drive around the potholes whilst looking for somewhere to park!

So, why exactly are NYCC prioritising roads for repair which are on the Tour de Yorkshire route? Could it be assumed that the “Duty of Care” element has gone out the window? Are NYCC discriminating against motor-vehicle road-users in favour of cyclists?

Here’s an idea for next year. “If” the Tour de Yorkshire wants to come to glorious Yorkshire next year (after all, Goodwill and Bastiman always say it’s wonderful and we locals should be prepared to take a lower wage for living here) then NYCC ask them for £250,000 to do so; if they want roads repairing or resurfacing then they pay for it.

They can then pay SBC £200,000 for all the disruption which would enable both NYCC and SBC to spend the money wisely (not often heard of in either ivory tower) and locally.

It would make for a better race watching the cyclists navigate what’s left of the roads. However, Tour de Yorkshire should also be required to take out a medical insurance. It would also help County Council Leader Cllr Carl Les who states:

“There is TV coverage in 178 countries across the globe and media coverage is estimated to be worth £116 million. The TV coverage provides a major opportunity to show the world the county’s fantastic communities and stunning landscapes.”

to give a TRUTHFUL view of Yorkshire!

I commented on your letter posted on the North York’s Enquirer Facebook page but apparently you couldn’t be tagged in it so i copy/paste it here for you.

Our dear Government spent a fortune in aiding the repair of the country’s roads and even had the Department for Transport produce an informative booklet entitled “Practical Guide to Street Works”, produced by the Highways Authority & Utilities Committee.

Chapter 8 (Excavating Surfaces – Bitumen Bound) page 12, “all edges must be trimmed and squared off to give a regular plan shape, as shown here: Figure S6.1”.

Chapter 10 (Notes on Compaction) page 19, “Where reinstatements fail, the problem is often due to poor compaction of the layers in the reinstatement. This can lead to: poor ride quality for vehicles”.

Annex 11 (Performance requirements As laid profile) page 73, “The reinstatement of any surface should be completed so that;

This used to be the Holy Bible of road repair standards and one which NYCC used to fail many repairs locally as “sub-standard”.

When I completed my course, way back in 1999 (Yup; we had to complete a course before we reinstated roads after the utility companies dug them up), it was also made very clear to us that not only is a raised or sunken repair not good for vehicles travelling over it, it also reduces the skid resistance of the repair and section of road.

Section 71 of the New Roads and Street Works Act 1991 (NRSWA) states “An Undertaker executing street works must when reinstating the street comply with whatever specification may be prescribed for materials to be used and standards of workmanship to be observed. The Undertaker must also ensure that the reinstatement conforms to prescribed performance standards”.

Cllr Randerson could also arm himself with: 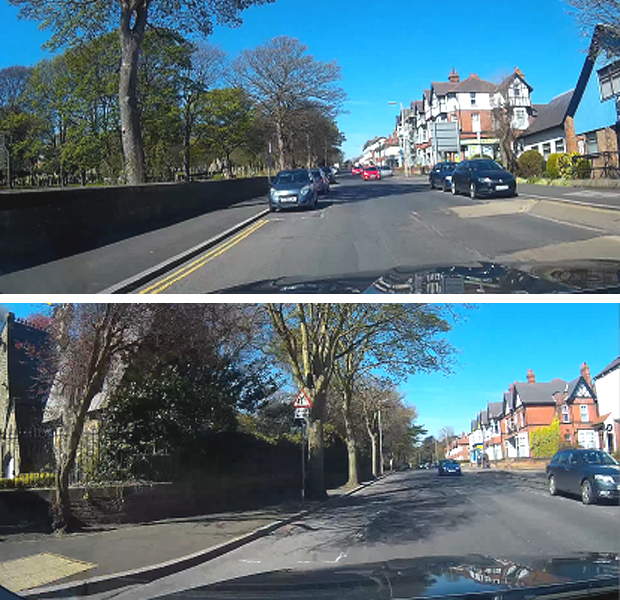 Luckily enough, I managed to catch two NYCC Highways Department workmen attempting a laughably sub-standard repair at the top of Dean Road, which also illustrates the lack of care, contempt of the law and Health & Safety of road-users. I would like to know the names of these two highly paid employees. Lucky it’s not on the Tour de Yorkshire route!