Sometime Guest Author Andy STRANGEWAY – campaigner and East Riding of Yorkshire Council Independent/Independent  Councillor – has published an astonishing exposé of his Council’s massive duty of care failure in regard to its responsibilities to one of its own senior citizens. (Correspondence reproduced by kind consent of the author).

ERYC has hit many lows but today I make public the most disgraceful all time low. I believe that Caroline Lacey, ERYC Chief Executive and Lee Thompson, ERYC  Head of Adult Services are responsible. 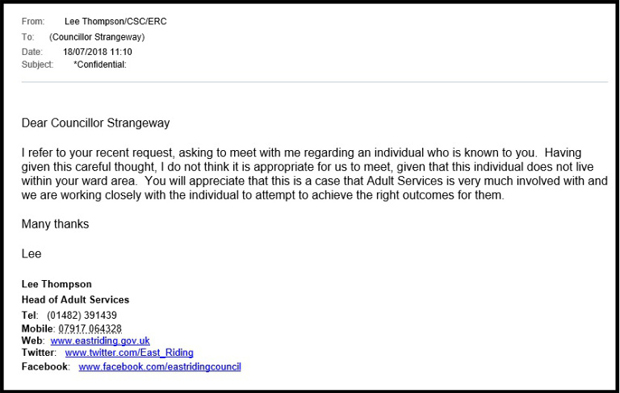 Up to 2011 Councillor Bob Tress, Liberal Democrat Councillor for Hessle, was the advocate for this “individual”. This gentleman did not live within the Ward area of Councillor Tress.

Why can a Hessle Councillor be an advocate for those not in his Ward while a Pocklington Provincial Councillor can’t?

I am disappointed to note that Lee Thompson chooses to draw upon the unofficial courtesy of Councillors acting solely within their own Wards in preference to addressing the real issue – the desperate and urgent care needs of an elderly man in the twilight of his days.

I can confirm, to the best of my knowledge, what is stated to be correct.

I have had sight of a solicitor’s letter which confirms the above that is being sent to Caroline Lacey and Lee Thompson tomorrow.

How many more residents are ERYC treating like this?

Astonishingly, ERYC Monitoring Officer Mathew BUCKLEY has made an unauthorised intervention by writing to Andy STRANGEWAY in the following terms:

I have had your latest blog post brought to my attention. I notice that you have left Mr Baverstock’s name at the bottom of the copy email you have reproduced on your site. Was this intentional or was it an oversight ? If the latter I would suggest you might want to remove his name from the reproduced email.

“Astonishingly” – because Mr BUCKLEY has no jurisdiction over the website of Andy Strangeway Campaigner – https://andystrangewayindependent.com/ – a fact made known to him on a number of occasions.

But perhaps Mr BUCKLEY wishes to assert that Councillor Andy STRANGEWAY’s every action is conducted as a Councillor – and that Andy STRANGEWAY, campaigner and private citizen, ceased to exist the moment he was elected? This is arrant nonsense.

It should be perfectly obvious to Mr BUCKLEY that if it were the case that Councillors’ actions were conducted exclusively in their respective capacities as Councillors, then Councillors would never be ‘off duty’. This would mean that every journey made by every Councillor would be subject to a legitimate claim for Mileage Allowances. Dream on.

Andy STRANGEWAY has responded to Mr BUCKLEY in his customary courteous manner:

I refer you to https://andystrangewayindependent.com/2018/07/24/eryc-head-of-legal-mathew-buckley-attempts-to-silence/

Astute readers will recognise that we appear to be witnessing another attempt by a Council Officer to exercise powers which he does not possess.

This behaviour is now recognised as “Toxic Leadership Syndrome” or (less euphemistically) “Little Hitler Syndrome”, sometimes clinically diagnosed as “Hypospadias” –  a condition believed to arise as a compensatory mechanism for a perceived inadequacy in the size of the subject’s ‘manhood’, or a shortfall in the number of the subject’s testicles, or both.

There may, of course, be other explanations. It could just be, for example, that Mr BUCKLEY was appointed beyond his competency – a failing rife amongst local authorities. Time will tell.