On Thursday 14th April 2022, local news outlet This is the Coast reported that the creation of a Town Council for the central, unparished area of Scarborough town is to be delayed until at least May 2024. I quote (in part), highlighting significant content in bold type:

“When the Borough Council is abolished next April the town will become one of just two parts of North Yorkshire without a parish council.

Scarborough wont get a Town Council until at least April 2024.

Speaking at a meeting last night County Council Chief Exec Richard Flinton said work on creating a new body for the town has not yet started.

Chief Exec of Scarborough Borough Council, Michael Greene, says there is a lengthy formal process to be followed to create a new town council and that can’t start before next April.

Mr Greene suggested that the decision on whether or not to create a town council would be down to the new unitary authority.”

This seemingly innocuous report contains the kernel of a much bigger story – a marked disagreement between North Yorkshire Count Council CEO, Richard FLINTON, and Scarborough Borough Council CEO, Mike GREENE – who appear to be blaming one another for what a Town Hall insider describes as “a monumental error of omission” on the part of SBC Officers.

The bone of contention – glossed over by the superficial report quoted above – appears to be that SBC Officers have failed to carry out the specific instructions of Full Council.

To shed further light on the matter, I consulted the SBC public record of Agendas and Minutes.

The meeting of Full Council on 6th September 2021 was a bad-tempered affair. I was there. In my article entitled “ARGOS: Out for the Count?”, I reported in great (and as-yet unrefuted) detail on the Monitoring Officer’s incompetence over her ‘miscount’ of the vote on the highly contentious ARGOS proposal, which many observers suggested was entirely deliberate, rather than merely incompetent. That is a very serious allegation: it is not mine.

The minutes of that meeting disclose an interesting debate, during which Councillor Liz COLLING [Lab.Co-Op.] proposed the following amendment (in italics – note the red underlined passage): 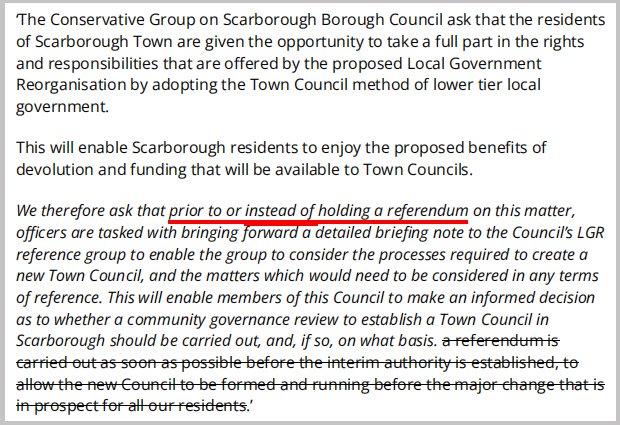 Readers will note that, by inserting the phrase:

“prior to or instead of holding a referendum”

the people of Scarborough have been effectively disenfranchised; their opinion thereafter need no longer be sought. But the whole thrust of the motion was to ensure a public referendum on the creation of Scarborough Town Council.

Following a brief adjournment to allow members to discuss matters within their respective Groups, Council reconvened and Council COLLING offered an alternative to her own Amendment, as follows: 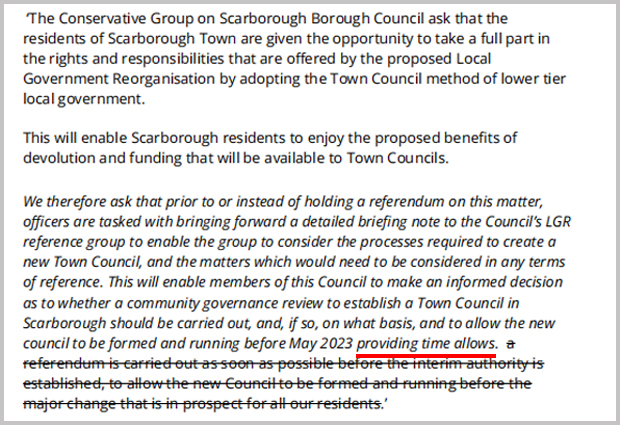 This revised Amendment was carried and, becoming the substantive motion, duly carried. The proposed referendum had been kicked into the longest available grass. Goodbye, public consultation.
The devil, of course – and as always – is in the detail. In this case, it is those last three words that are most devilish of all:

I wonder who slipped that little gem into the mix, Mrs DIXON?

Apparently, “time” did not “allow” for the drafting of “a briefing note” on the basis of which members could “make an informed decision”. Can it really take seven months to prepare “a briefing note” for the Council’s LGR reference group, so that members of the Council (i.e. Full Council) could “make an informed decision as to whether a community governance review to establish a Town Council in Scarborough should be carried out…before May 2023”? This is not plausible. The reality, surely, is that Full Council has been conveniently by-passed.

And what are the consequences should “time”  not “allow” – which, apparently, it did not?

Not that I am suggesting that there was a specific intention on the part of SBC Officers to bring about this gaping hole in the democratic integrity of the changeover to the new Unitary Authority. No. Far more likely is it that SBC Officers have once again simply dropped the ball. But I could be wrong . . . “Incompetence or negligence?” That was Mr James CORRIGAN’s question – on more than one occasion.

Nevertheless, NYCC CEO Richard FLINTON, remember, has confirmed, to This is the Coast, that:

“work on creating a new body for the town has not yet started.”

This work is the work intended to be started by that Resolution of Full Council on 6th September 2021. I was there: “Officers are tasked with bringing forward a detailed briefing note”.

Yet SBC CEO, Mike GREENE, is quoted as stating:

Perhaps . . . but ONLY if Full Council were to resolve, on the basis of that absent “briefing note”, to make application to the County Council for Governance Review. Councillors assure me that this has never happened.
In my view – and I believe this is evidenced above – the Council’s own public record demonstrates that it is Mr GREENE who, despite repeated warnings to keep a close watch on his Officers, is once again trying to cover up disastrous negligence or incompetence – or both – to the cost of the people of Scarborough. What a sham!