Guest Author BOB ROBERTS sets forth a number of salient reminders as the May 2019 local election campaigns crank up.

I would suggest that to many of the people of the Borough  the local elections being so close now, will be a very timely intervention especially in light of the almost weekly shenanigans taking place within our Town Hall all of them involving both officers and elected members who it would seem  have forgotten the fundamental purpose of a council.

For me, as an ordinary council tax payer,  I have always held the belief, perhaps naïvely, that the SBC, to whom we pay Council Tax, are subject to a reasonable expectation to transform that Council Tax into services within the community. Street lighting, bin collections, street cleaning, provision of public conveniences (yes, it does happen with some councils) and, of course, we pay for our Police and Fire & Rescue Services by way of County Councils …

… not into bankrolling someone else’s business aspiration, no matter how good it is. If it’s that good, then with a bank and a good business plan, it can be made to happen. It’s not the job of Councils to do that for them. It’s seems, though, that somewhere along the line in recent years SBC (both Councillors and the Directorate) have determined that some services should (and have) been sacrificed to enable some kind of  “Dragons Den” for a variety of individuals and companies who have made their pitch to have their businesses bankrolled by SBC.

It certainly appears to be the case, with regard to Benchmark and the Alpamare dealings and the 9 million pound “loan” (or whatever it’s called in Council-speak), and even the demolition of the Futurist for Flamingo Land and Welcome to Yorkshire , going back further the TIC issues in both Scarborough and Whitby and Bathing Water Quality inaction.

Then we have the fiasco surrounding Futurist demolition, which will undoubtedly overrun the projected budget. And we now learn that nothing can be built on the site for a minimum of 3 years whilst the site stabilises – or, of course doesn’t, in which case it’s open ended.

Little thought  or consideration has been given to the property owners and tenants in the immediate vicinity of the site, already suffering damage but in the long term will have significant difficulty in selling their properties.

Of course, then there is the OAT – running up debts on an annual basis with, it would seem, the Leadership in total denial.

The aforementioned are, of course, only part of the difficulties involving our beloved Council, in which we, the electorate, have lost complete trust and have absolutely zero faith in the competence levels of senior Officers and Councillors alike.

The “Tour de Yorkshire” has been awarded again, with the ‘amassadorial’ junkets paid for by us.

The RIPA issues rumble on with regard to the interception of Councillors’ emails.

The Vote of No Confidence was hijacked in probably the most undemocratic intervention in any Council Chamber in the country.

The loss of the coveted Blue Flag bathing water quality awards for both South and North Bays is an insult to Scarborough’s heritage the premier bathing destination of the entire east coast.

So these forthcoming 100 days (or just under) is a very timely opportunity for intervention by the people of the Borough who, I’m sure, will need no reminding on a weekly basis as this whole sorry mess of Alpamare – and now it is strongly rumoured that  it was SBC who settled the £700,000 gas bill, with our money.

None of us in the Borough would be surprised if that were the case – certainly not after the deal that Benchmark struck with what was described by Roland Duce as an “intelligent” Council. I do wonder, however, just where Mr Duce’s own particular benchmark for “intelligence” is set.

The chinks are beginning to show in the Tory armour, though blame will be apportioned elsewhere – much like the Council apportioning responsibility to Wilmot Dixon in the never-ending Futurist site debacle.

I hope that the people of the Borough will constantly remind themselves of these abysmal failures over the next ninety-something days. 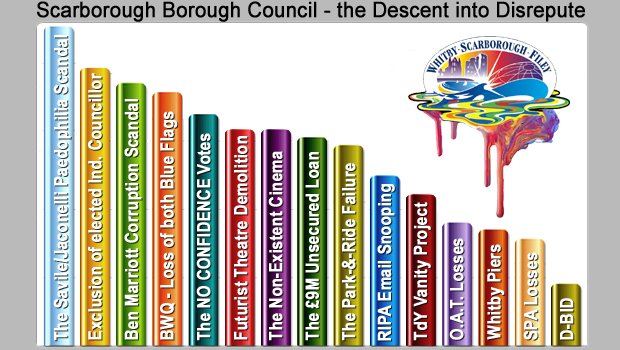