Regular readers of the North Yorks Enquirer will already be aware of my opinion on the matter of Tory-led Scarborough Borough Council’s (SBC’s) increasingly predatory abuse of flawed on-street parking regulations in pursuit of ever more revenue. For new readers, the following article will suffice to provide a general overview:

SBC stands out – and not only for the red type. (I have not forgotten the dispute a few years ago between SBC and NYCC over an alleged shortfall 0f £198K in the amount payable by SBC to NYCC).

In a news report on the Yorkshire Coast Radio website, the following item of information is provided:

It has been my contention that SBC has pursed an aggressive practice and policy of hammering the motorist at every conceivable opportunity in a relentless drive for ever greater revenue – with a cavalier disregard to the effects that this process is visiting upon local businesses and residents.

I am now able to offer readers compelling evidence in support of this contention.

Government guidance advises Councils to delineate parking bays with a dotted white line, conforming to the following tolerance in regard to width:

But in recent times, many Councils have re-marked their parking bays to just above the 1.8m minimum recommended width – for the specific purpose of catching out all but the most perfectly parked in all but the smallest vehicles, since being parked with even one tyre on (or over) the line constitutes an infringement – or, from SBC’s perspective, a ready-made revenue opportunity. 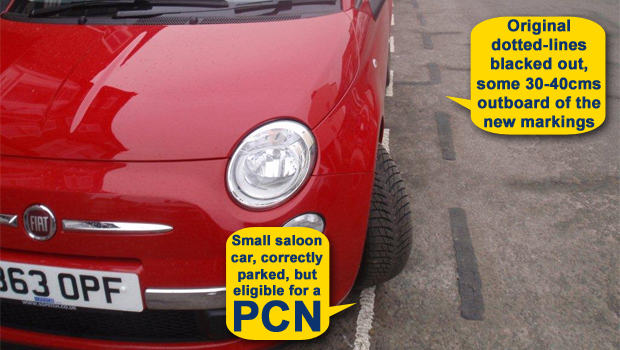 A member of the public (in fact, parking campaigner Andy STRANGWAY) has elicited a response to a Freedom of Information request to SBC for information limited to infractions pertaining to parking not wholly within any given designated parking bay markings – without consideration to any other type of infraction:

Presented like that – a sequence of numbers, in reverse chronological order – the extent of the dramatic increase in persecution is not immediately apparent.

Now take a look at this bar-graph showing the “86 – BEYOND THE BAY MARKINGS” PCNs – which have increased from an average of just 57 PCNs (‘Parking Tickets’) per annum over the first four financial years shown – to an annual total for 2014/15 almost sevenfold higher at 395 PCNs: 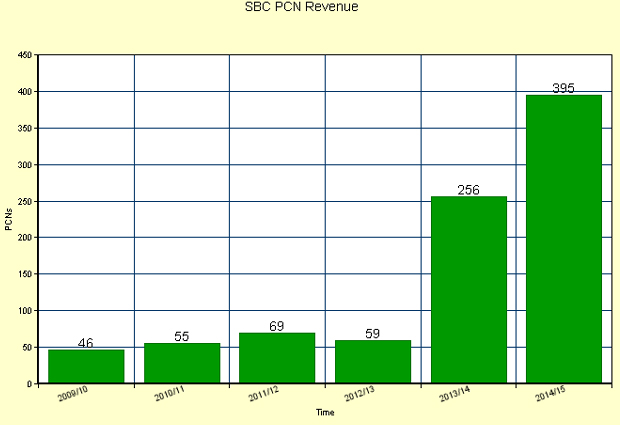 Or are Parking Enforcement Officers carrying out a merciless campaign of extortion?

And in terms of motorists’ hard-earned cash, SBC has increased its revenue equally dramatically from the “86 – BEYOND THE BAY MARKINGS” PCNs – from an average of £1,062.50 per annum over the first four financial years shown years – to an annual total for 2014/15 which has increased more than eightfold to a staggering £8,588: 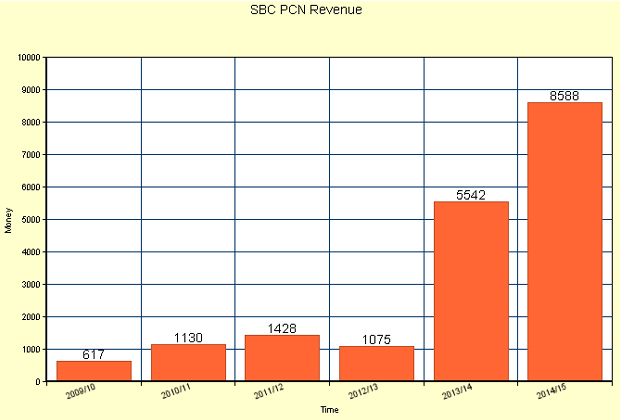 Suffice it to say that he “24 – NOT PARKED CORRECTLY WITHIN BAY” PCNs show a very similar trend. Taken together, last year’s combined total (£13,927) shows a tenfold increase over the 2009/10-2012/13 average four-year combined total average.

So the next time a Conservative election candidate stands on your doorstep and tells you that the North Yorks Enquirer cannot substantiate its claims, you can refer her/him to SBC’s own Freedom of Information response of 2nd April 2015, FOIA number 3774, and tell them that it is my opinion that the Council which they have dominated has presided over a parking policy emphatically NOT administered for benefit of the tax-payers, but rather for the replenishment of their Officers’ pension fund deficit.

And as for all you opposition candidates: you need to be asking questions at the Town Hall on Tuesday morning – so you know the right answers when you are out and about canvassing for votes in these coming weeks.

Voters will be asking what sort of a parking policy you will be working towards.

I hope you can come up with something better than this racket.