The Audit Committee of Scarborough Borough Council is scheduled to meet on Thursday 26th January 2023. The Agenda indicates that MAZARS have accepted a formal Objection in relation, inter alia, to the Scarborough Harbour Undertaking accounts: 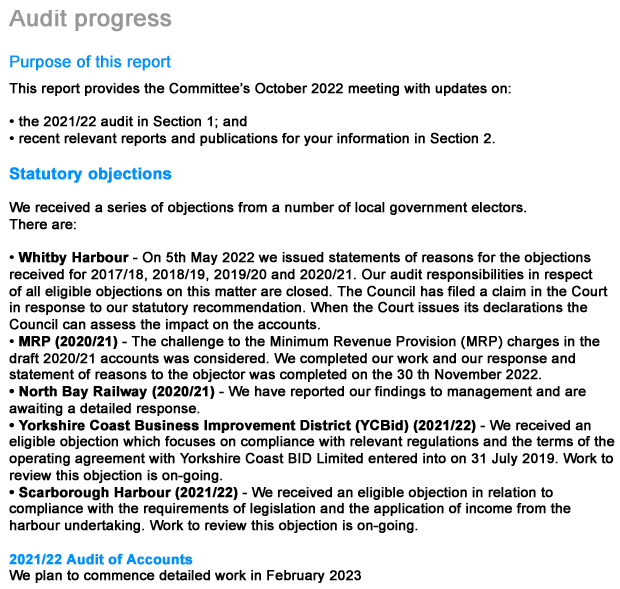 All of the above-listed grounds for Objection have been explored in some deatil here in the Enquirer over a period of years.

In particular, let us consider that final entry:

Scarborough Harbour (2021/22) – We received an eligible Objection in relation to compliance with the requirements of legislation and the application of income from the harbour undertaking. Work to review this objection is on-going.

I am no expert, but this has a very familiar ring to me, resonating closely with the Fight4Whitby formal Objection, which related to the assignment of allegedly ‘ring-fenced’ income from the Whitby Harbour Undertaking to the General Fund.

The role of an Audit Committee is set out in guidance from CIPFA (https://www.cipfa.org/-/media/Files/Services/Support-for-audit-committees/CIPFA-Audit-Committee-Position-Statement-2022.pdf) and is summarised below:

Audit Committees are a key component of an authority’s governance framework. Their purpose is to provide an independent and high-level focus on the adequacy of governance, risk and control arrangements. The Committee’s role in ensuring that there is sufficient assurance over governance risk and control gives greater confidence to all those charged with governance that those arrangements are effective.

The SBC Audit Committee has been aware of the Objection concerning the Whitby Harbour Undertaking that has prevented the signing-off of the authority’s Annual Accounts for almost seven years. The last Annual Accounts to be signed-off were for the year ending 31st March 2015. Members of the Audit Committee have thus been fully aware of the Objection in relation to the Whitby Harbour Undertaking for many years.

Now considering the role of an Audit Committee in regard to the responsibility to ‘provide an independent and high-level focus on the adequacy of governance, risk and control’, has our Audit Committee let us – the Council Tax payers – down, by not considering the implications that arise from the Whitby Harbour Undertaking formal Objection, as they may appear in relation to the preparation of the Scarborough Harbour accounts?

Surely, any and every member of the Audit Committee (irrespective of political allegiance), whose primary role is to ‘provide independent high-level focus on adequacy of risk’ would seek to question whether or not the issues raised in relation to the Whitby Harbour Undertaking might also be applicable to the Scarborough Harbour Undertaking? Maybe members did? I have not seen any such deliberations reflected in Minutes or witnessed discussions in Council or Committee meetings.

And what about the Chief Executive –  Mr Nick EDWARDS, formerly the s.151 Officer with statutory responsibility for the Council’s financial affairs and holder of responsibility as Harbours Executive for for over a decade?

And what about other Senior Officers – e.g. the new s.151 Officer, Ms Kerry METCALFE?

What about the External Auditor, MAZARS?

Have they all been asleep at the wheel?

If “justice delayed is justice denied”, how can kicking the public money can down the road be remotely acceptable? (As has just been accomplished in another of the Council’s rearguard actions; the Court hearing against YCBID ‘refuseniks’ has been adjourned to 26th April 2023, by which time SBC will just be a lingering malodour).

Surely, anyone involved in the Council affairs from a legal or financial perspective should have considered the potential parallels of these two Harbour ‘ring-fencing’ issues, each involving millions of pounds – issues so serious, it is worthy of note, that they will ultimately be determined by a High Court Judge in the not too distant future.

Why has it taken the raising of a further Objection, no doubt incurring considerable cost to the public purse, to raise what appears to amount to fundamentally the same question that has been batted back and forth since the initial Fight4Whitby Objection to the Whitby Harbour Undertaking, especially given that the Enquirer has repeatedly highlighted the whole affair?

Readers of the Enquirer’s coverage of the mind-numbing financial ineptitude (and I use the word charitably) of Potto Parish Council may be tempted, when considering MAZARS and PKF LITTLEJOHN’s respective interventions, to conclude that local authority finances are in the hands of muddlers and meddlers who have been appointed far beyond their inadequate level of competence.

“This is the way the world ends; not with a bang but a whimper”.

Scarborough Borough Council will end not with a whimper, but a jubilant roar of “Good riddance!”

One would hope, perhaps in vain, that those responsible for seven years of failed accountancy will be held accountable.

I am not making a book.

Perhaps I will write one.

Then again, it seems to be writing itself!

I was about to submit the above article for publication when a bevy of emails dropped into my Inbox – just in time for me to include the following email, a Public Question lodged with SBC’s Audit Committee at 3:32pm this afternoon by Mr James CORRIGAN.

From: James Corrigan
Date: 23 January 2023 at 15:32:20 GMT
To: Democratic Services <democraticservices@scarborough.gov.uk>, StJohn Harris <StJohn.Harris@scarborough.gov.uk>, Paul Preston <Paul.Preston@scarborough.gov.uk>
Cc: All Scarborough Borough Councillors
Subject: QUESTION FOR AUDIT COMMITTEE 26 JANUARY 2023  AGENDA ITEM 4 – EXTERNAL AUDIT PROGRESS REPORT
QUESTION FOR AUDIT COMMITTEE 26 JANUARY 2023
AGENDA ITEM 4 – EXTERNAL AUDIT PROGRESS REPORT
Dear Sir
I have looked at the Minutes of previous Audit Committee meetings to ensure that this matter has not been dealt with or explained previously. I can find no explanation.
I note from the Mazars report on page 4 there is a large section headed ‘Statutory Objections’. I note that the Agenda includes a specific item regarding the Whitby Harbour matter, that is the subject of a High Court hearing. At the Audit Committee meeting on 28 April 2022 a question was raised about the MRP. I also note that the Council has published revised accounts reversing the original treatment and the £1.1million from reserves, so whilst not stated in the Mazars report, it appears that the objection to the MRP was made on valid grounds.
In relation to the latest accounts eligible Objections have been made relating to compliance with regulations and legislation relating to Yorkshire Coast BID and Scarborough Harbour.
Mazars reference to these objections means they are potentially serious matters and raises further doubts about the assets that will be handed over to the new North Yorkshire Council in just over 2 months, whilst acknowledging that Mazars have not yet considered in detail those relating to the 2021-22 accounts. However, there is no explanation of the circumstances around the item described as North Bay Railway (2020/21). The Mazars report considered at the Audit Committee on 28 April 2022 made a vague reference to ‘accounting entries’.
The report being considered today states that a detailed response is awaited from management. As this relates to the previous year’s accounts which has not been resolved it appears that there is a relevant issue. Can you please explain the subject matter of the objection and confirm how long Mazars have been waiting for the ‘detailed response from management’ and when that response will be made.
Please acknowledge receipt by return.
James Corrigan