The Metropolitan Police Operation Yewtree has published information showing offences by Force area and the key abuse locations in England and Wales.

We have added to this information:

The complete data is reproduced in the table at the foot of this article.

As you will see, Savile’s offending is centered around five areas where he lived, worked and had friends, in the Metropolitan, West Yorkshire, Thames Valley, Greater Manchester and North Yorkshire Police areas.

According to remarks made by local people, Scarborough Councillor and then Mayor Peter Jaconelli was well known for being a paedophile in Scarborough and may even have been convicted of this.

His offending was centered around boys who worked in his icecream parlours in the summer, or who attended his Ippon Judo Club in Scarborough, which he set up with another man, Norman Grundy, in the 1950’s. Grundy was a bona fide martial arts exponent, but it is alleged he was “used by Jaconelli as a legitimate front man …. for this the finical side of the Ippon Judo Club was secure I have no reason to believe he was involved in any way to Jaconellis kiddy fiddling but the kiddy fiddling was known by everyone”.

Jaconelli also arranged summer schools to study karate (then in its infancy in the UK) at a local hotel.

One of Jaconelli’s victims has commented, thus:

“I still remember the feelings of disgust and the feeling of trepidation of something going to happen whenever he was about.  Contrary to what I read the Ippon judo club started in Nelson St not Huntress Row.  My clear memories of the judo club relating to Jaconelli were he was no more a black belt than our cat.  He was there for one reason and it had nothing to do with judo but more to do with boys.  He would ask the boys to try and throw him with a throw which required the thrower to back into him ( shoulder throw ect ).  If you ever met him you would know he had a low centre of gravity and about as wide as he was high , needless to say for a young lad difficult to move.  I think changing time was one of his favourite time were he could come in and ogle at the lads cracking stupid sex related comments but just laughing them off.”

“I worked down on the foreshore at one of his ice cream hamburger shops.  The same feeling of trepidation abound whenever he visited the shop.  More sex related comments to both boys and girls again trying to laugh them off.  Running the gauntlet seems to cover picking up your wages in his very small office , trying to avoid his wandering hands and the compulsory rubbing by you and like most of us tried to go there in numbers but he used to get quite pissed off when this happened.  After work he used to take the later workers home but everybody wanted to get into the back of his van definitely not the front were the wandering hands were full on , fighting him off the whole trip while he jokingly tried to drive with one hand and laugh it off as a joke.”

“I for one had told him in no uncertain way to F  off on many occasion but it did not seem to bother him , he might stop then but he must have had a short memory because a new day a new opportunity.  I believe his actions were common knowledge but I have no idea why he was allowed to get away with it.”

“I grew up in Scarborough during the ’60′s and 70′s. Peter Jaconelli was a well known local character and kiddy fiddler. He only employed young lads between 13 and 15 and it was well known that he liked to touch them up often offering money for them to go somewhere private with him”

Our correspondent then goes on to name another member of the Scarborough ring, closely connected to Jaconelli, whom he also alleges abused boys in an ice-cream parlour:

“If you were unfortunate enough to work for him (and he only employed boys) he would sit in his alcove unseen and watch you. He was well creepy and was always asking you if you liked ice-cream. I know, I worked for him for a season. He was quite touchy-feely and only stopped when I told him to leave me alone. No-one ever questioned them yet the police must have known about their antics. Horrible horrible men.”

Another correspondent has commented:

“Jaconnelli’s history goes back further than the early 70,s, when I was in junior school, 1955-1960, he ran the Ippon judo club on Huntriss Row, all of a sudden all the parents took their kids out and it closed, practically overnight. Obviously I was very young and didn’t know what was going on but some years later I discussed it with one of my old school mates from that time who used to go there.  He said his parents stopped him going because something had happened but he didn’t know what, and it was closed down that same week. I may be barking up the wrong tree here but the vast majority of the membership of that club were kids 7 to 15 years old”.

In Savile’s 1976 autobiography, Love is an Uphill Thing, he openly admitted using his caravan to have sex with underage girls describing being among a group of naked young girls in his caravan – “we all resembled some great human octopus”.

He also describes how two mothers complained, after their daughters had spent the night there with Savile and another man. We cannot identify which flat this was or the other paedophile, but it must give some idea of what Savile was up to quite openly at his flats, including the one in Scarborough.

The connection of the Scarborough Ring to the BBC.

It has been alleged that children were abused on BBC premises by Savile and other men.  A number of Savile’s friends took part in BBC programmes and were invited to BBC premises.  Peter Jaconelli for instance appeared three times on BBC television.  It is not clear if this was in London, Manchester or both studios.  It should be stated that some of his friends had no convictions and are unconnected to any offences by Savile.  Nevertheless, they all visited BBC premises.

However, one of his victims has alleged that Savile used the TV programmes to procure children for use by other paedophiles in his dressing room, where they would commit sexual offences watched by other men brought in by Savile for this purpose.

We have evidence that Savile used agents in Scarborough to procure under age boys and girls for his “Set” there.  It must surely therefore be a concern that Savile used his position in children’s TV to procure children for those of his friends (who were that way inclined) to abuse, when they appeared on his programmes.

Summary of the Scarborough Ring, the most successful in British policing history

Despite being known to local people and apparently to North Yorkshire Police as a paedophile, Jaconelli was nevertheless able to operate in Scarborough with impunity for all of his time there, probably from before the war, but certainly from 1955 – when he founded the Ippon Judo Club –  until his death in 1999.

To quote Nigel Ward, who encountered Savile and his entourage in the 1960s:

“I expect you will be unsurprised to learn that I have this [allegations of paedophilism at the Ippon Judo Club] from several sources. Once again we must ask the question: since so many of the rumours about Savile were so widely circulated, how can it possibly be that such perfunctory investigations as were conducted by NYP remained ignorant of the common word on the streets and in the pubs? Were Scarborough Police never on the streets or in the pubs? Didn’t they have friends and relatives who were?”

If Savile is Britain’s most prolific sex offender, then Jaconelli was certainly its most successful, so two of the highest profile paedophiles in British history both operated in Scarborough, under the noses of the Police with impunity.

So two of the highest profile paedophiles in British history both operated in Scarborough, under the noses of the Police with impunity for about fifty four years.

Had Jaconelli been arrested in the 1960’s, it could have led to the entire gang being rolled up and prevented hundreds of offences being committed.  Although Scarborough Police must have known what was going on, nothing was done, probably because of Jaconelli’s status and influence. Instead, the major figure in the Scarborough ring (Jaconelli) was elected as a Councillor and then Mayor, made the face of advertising for tourism for Scarborough and then an Alderman!: 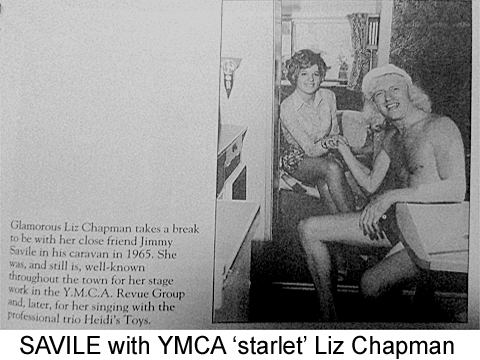 Like Jaconelli, Savile (Britain’s most prolific paedophile) was made an honorary Freeman of the Borough of Scarborough . . . by the former head of Scarborough Police.

Which may be why Councillor Tom Fox (who was that Police Officer) will not answer Nigel Ward’s eminently reasonable question:

“Would the Leader confirm or deny that, as a former ranking Police Officer in Scarborough, and as long-serving leading Councillor since that time, he was aware that elements within the Authorities were cognisant of concerns of the gravest nature in respect of the activities of Sir Jimmy Savile, yet nevertheless played a leading role in the lavish civic honours bestowed upon a man now widely reviled as the worst and most degenerate sexual predator in the Borough’s history?” 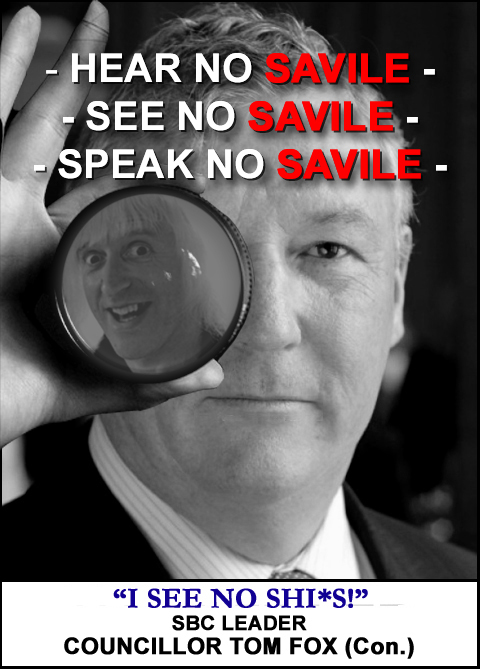 Many years ago I watched a film called “Catch Me If You Can” with Leonardo diCaprio about the fraudster Frank Abignale and the way he ran rings around an FBI agent called Hanratty (Tom Hanks), whilst embezzling millions of dollars from just about everyone that crossed his path. Although fraud is wrong, you couldn’t help but admire Abignale’s skill and the way he humiliated Hanratty for two years, before finally being caught in Paris in 1968.

But you just couldn’t invent this.

The Operation Yewtree Incident Room, on 0208 217 6446 indicating they are doing so pursuant to the Real Whitby investigation.