As mentioned in an earlier article – “Arguably the WORST Parish Council in England” –  Mr Roger Alan BRISLEY FCA is, and for over a decade has been, Internal Auditor to Potto Parish Council.

Mr BRISLEY’s work as Internal Auditor to Potto Parish Council is legally required to comply with statutory Regulations, formal Audit Guidance and the Ethical Framework of the Institute of Chartered Accountants for England & Wales (ICAEW), as set out below.

Mr BRISLEY and Potto Parish Council are required by s.5(1) of the Accounts and Audit Regulations 2015 to carry out an “effective” internal audit, including evaluation of Risk, Control and Governance processes:

Mr BRISLEY has been a member of the Institute Chartered Accountants England and Wales (ICAEW) since November 1980, hence, he is also obligated to abide by ICAEW’s Ethical Code whilst executing his work:

Collectively, these criteria are intended to ensure public confidence in the fact that Mr BRISLEY (or any past or future Internal Auditor) discharges his/her duties lawfully, professionally and ethically, whilst always acting in the public interest.

Each financial year, Mr BRISLEY completes a document entitled Annual Internal Audit Report (AIAR), which comprises a series of standard questions to be answered with a ‘YES’, ‘NO’ or ‘NOT COVERED’ tick.

He may also provide a Statement, summarising any applicable comments and, if necessary, attaching explanatory Notes. All of these documents can be found on Potto Parish Council’s website:

For the accounting year 2015/16 (which was the year for which the second Formal Audit Investigation was carried out by PKF), Mr BRISLEY’s AIAR comprised an uninterrupted series of ‘YES’ ticks – and identified not one single Audit ‘weakness’: 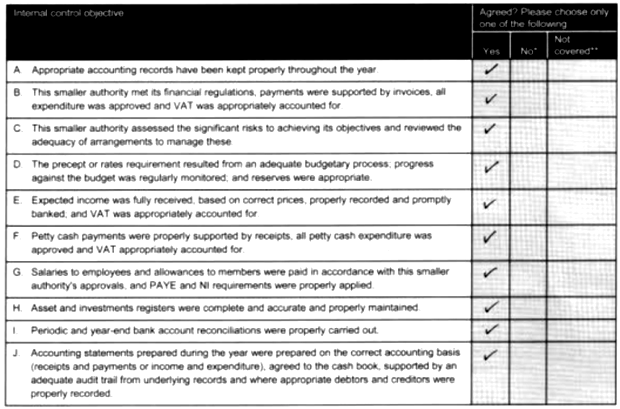 In stark contrast, the PKF Final Report for the same year found that the Council had ‘again’ been in serial ‘breach of the LGA 1972 due to late issue and publication of agendas’. PKF noted that this breach ‘means that Council decisions [made at these unlawful meetings] were themselves unlawful’.

Mr BRISLEY was apparently unable (or unwilling?) to discern even a single one of a lengthy litany of serious failures identified by PKF.

In fairness, Mr BRISLEY’s 2019/20 AIAR did identify one significant issue – how the Cash Book is written-up – and two minor housekeeping matters, recorded in expansive detail in Mr BRISLEY’s explanatory Notes.

It bears clarification, at this point, that the scope of the Internal and External Audits are very similar and frequently overlap.

Internal Audits must be independent, focus on measuring current performance and identifying shortcomings and other areas for improvement.

External Audits must also be independent, conducted by an independent third party and seek to verify the accuracy and veracity of the work carried out by the Internal Auditor on behalf of her/his employer – the Council (i.e. ultimately, the Potto Council Tax payers).

The External Auditor’s Annual Governance and Accountability Return (AGAR) includes accounting statements and bank reconciliation of expenditure over £100, as well as questions on the Council’s Annual Governance Statement (AGS) about financial management, effective internal control, lawful compliance, risk assessment and whether or not the Internal Audit was “effective”.

Readers can readily see that the crucial required elements of both Internal and External Audit Reports are extremely similar, with a great deal of overlap; ergo, the conclusions of the two Audits should also be broadly similar; disparities, should they exist at all, should be no more than minor.

Unfortunately, it is obvious that the respective conclusions of the Internal and External Audit Reports for Potto Parish Council are light years apart – presenting the appearance that the respective Reports refer to two totally different and wildly dissimilar Councils – one, exemplary (Mr BRISLEY’s evaluation) and the other, an absolutely disastrous ‘car crash’ of a Council (PKF’s evaluation).

On 26th September 2022, I asked Mr BRISLEY whether or not he agreed with the PKF Public Interest Report and associated recommendations – his ‘Right of Reply’.

However, the disparity between the Internal and External Audits now turns out to be even greater than appeared to me at that time.

It is small wonder that Potto ‘whistleblowers’ requested External Auditor PKF to consider issuing a Public Interest Report (PIR) – a step so extreme and extraordinary as to have occurred only three times following Audit Investigations over the past five years throughout the 10,000 small Councils for which PKF is one of only three appointed External Auditors; PIRs are reserved for only the most extreme cases of non-compliance.

In addition to the usual Annual Reports, PKF also carried out a four-year forensically detailed Formal Audit investigation, from 2016. This confirmed that ALL BUT TWO of the 326 Formal Objections to Potto Parish Council’s returns received over these four years were accepted as VALID and that 97 were so serious – and collectively so significant – that, taken together, these weaknesses did indeed fully justify a PIR:

It is interesting to note, as an aside, that although PKF LITTLEJOHN LLP, in their letter of 8th March 2021, confirmed 326Valid Objections to Potto Parish Council’s accounts:

The Council itself has inexplicably expanded this shameful total to 366, for reasons which the Chair, Councillor Andy WILDE, may wish to clarify:

PKF confirmed to Potto Parish Council on 6th April 2022 it was to issue a PIR and, after extensive and multiple legal checks, the PIR was eventually formally issued on 21st July 2022.

Thus, even in the face of an upcoming and deeply damning Public Interest Report, acknowledging the existence of 326 Valid Objections, Mr BRISLEY remained unconcerned about the 97 Valid Objections deemed by PKF to be SO serious as to justify the PIR.

Mr BRISLEY, in his 2021/22 AIAR and Statement, continues to describe a perfectly run Council with NO ISSUES.

And this in diametric opposition to internationally renowned PKF LITTLEJOHN LLP (PKF), who, in their PIR, identified a very large number of highly significant shortcomings.

These facts concerning Audit processes at Potto Parish Council are irreconcilable. They brook no denial.

Readers may be tempted to share my view that Mr BRISLEY has failed, persistently and catastrophically, to identify a single one of the catalogue of extremely serious weaknesses identified and recorded by PKF in its PIR. Why?

Readers may also conclude, to state the blindingly obvious, that the assessment, scrutiny and evaluation carried out by Mr BRISLEY was not executed with sufficient degree of professional scepticism, nor with an adequate or meaningful level of challenge and diligence – as his role as Internal Auditor requires.

In my view, Potto residents owe an incalculable debt of gratitude to the “whistleblowers”.

It should not be forgotten that, had Mr BRISLEY identified the plethora of failures identified by PKF, then the PIR and the protracted, scrupulous and (ultimately) staggeringly expensive investigation leading to it, need never have arisen and the residents of Potto could be have been spared a bill of over £37K – or circa £500 per taxpayer, on top of their normally anticipated Council Tax bills.

Hands up all those who think Mr BRISLEY should be the one to bear this responsibility and provide restitution for his incompetence? Why should 120 Council Tax paying households bear that expense?

In my next article, I intend to examine how this disaster occurred and why it has been permitted to continue for about a decade.