Staff at Yorkshire Coast Homes attended the 24 Housing Awards ceremony in Birmingham, last night. The result of Yorkshire Coast Homes’ endeavours is that they came Runner-Up in the ‘Social Media Pioneers‘ category, for their services to Tweeting and Facebooking in the Borough of Scarborough.

The awards ceremony was held by Allpay Limited at the Aston Villa FC’s plush hospitality suite. Allpay Limited provide online payment services to the public and third sectors. The Third Sector is partially comprised of former local authority housing associations, of which Yorkshire Coast Homes are one.

Ten staff from Yorkshire Coast Homes attended the 24 Housing Awards ceremony. The five men and women (presumably to comply with YCH’s equality rules) travelled to the event by train, staying overnight in what appears to be a Premier Inn, then returning to Scarborough, presumably using their off-peak return train tickets. 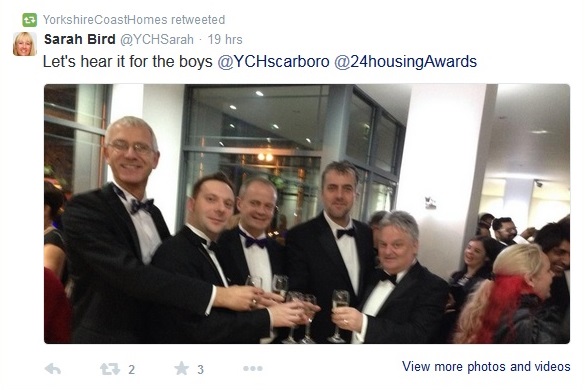 So, how much did Yorkshire Coast Homes pay out for ten staff to attend the event? Remember, those costs will be passed onto the tenants of Yorkshire Coast Homes as part of the rent they pay and also to the taxpayer, given that the housing association is also partially funded by government subsidies.

£810 – 10 x Off Peak Single Return from Scarborough to Aston

For those who wish to relive Yorkshire Coast Homes’ glorious second/third place, you can have a browse down YCH’s Twitter feed. I do hope all the staff who attended the event remembered to pick up their Goody Bags? After all, we’re paying for it! 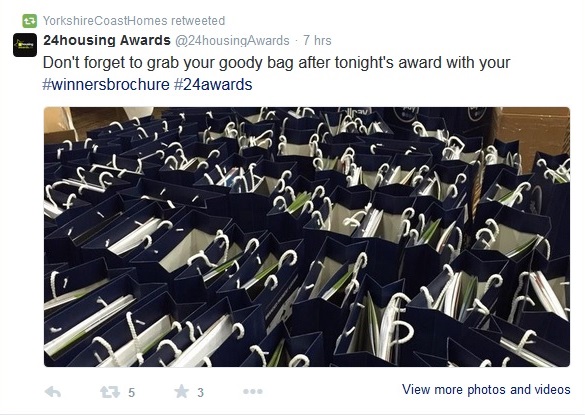 Is your local authority or government funded third sector organisation attending pointless awards ceremonies and troughing their way through vast amounts of taxpayer’s cash in the process?