Guest Author Alderman Stormin’ NORMAN MURPHY writes to explain why, in his view, Scarborough Borough Council was right to pass a Vote of NO CONFIDENCE in the governance arrangements of Yorkshire Coast Business Improvement District Ltd (YCBID).

As those of you who have been following the Yorkshire Coast BID scandal will know, and certainly the 1,365 business owners who are being forced to pay the BID Levy know, Scarborough Borough Council’s persecution of the victims of the £5 million pound YCBID extortion racket has, over the last three years, been relentless.

However, although Scarborough Borough Council is persecuting the Levy non-payers, they do it at the command of the YCBID Board. The “BOARD” is the driving force behind the BID and it is they who call the shots.

The YCBID Board, a group of nobodies, own and run the BID and it is these individuals who Hero Sumner, Chair of the Yorkshire Coast Levy Payers’ Association, recently described as “a set of appalling inhumane creatures”.

So, we might fairly ask, who are the appalling and inhumane creatures who sit on the YCBID BOARD?

Well, let’s take a look at them; and first up is the Chairman of the Board, Mr Clive Rowe-Evans.

It might seem obvious to assume that the Chairman (who in this case is Mr Clive Rowe-Evans) of a local business group which was specifically set up to further the interests of local businesses in the Yorkshire Coast area, would himself have to have a Levy-paying business or property in the area.

However, this would be an erroneous assumption. Mr Clive Rowe-Evans has NO business in the YCBID area.

Indeed, how he ever became Chairman of YCBID is something of a mystery. He is not from the Yorkshire Coast, has no high-profile connection with Scarborough and, prior to his elevation to the Chairmanship of YCBID, seems to have had no interest whatsoever in promoting our local businesses.

Clive Rowe-Evans is, it would seem, a placeman, parachuted into the role of Chairman by none other than the guy who runs BIDs (extortion rackets) all over the country, Mo Aswat. 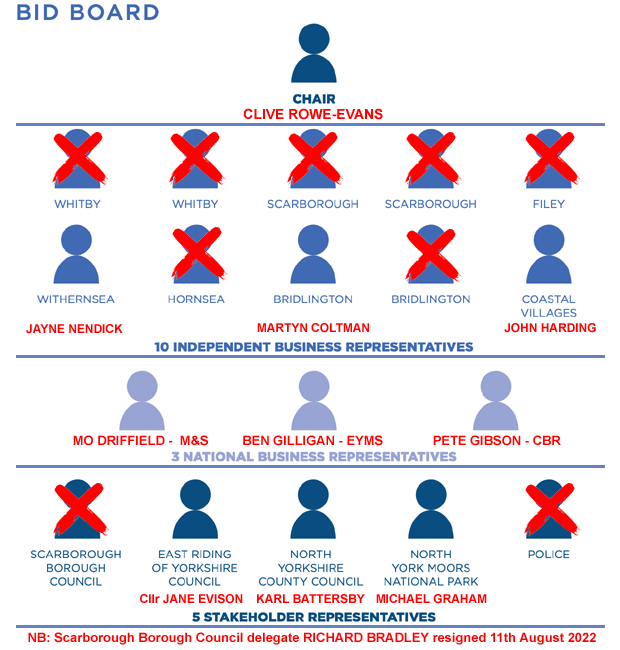 Let us now look at the 10 Independent Business Representative member places on the YCBID Board.

It might seem reasonable to expect that all of the 10 IBR member places available should, again, be occupied by representatives who have businesses or properties in the YCBID area and are therefore Levy-payers.

Membership of the YCBID board is, to all intents and purposes, a closed shop with only those Mr Rowe-Evans thinks suitable allowed to join.

So who from the Independent Businesses has Mr Rowe-Evans allowed to join the Board? Well, the list is predictably small and select. And although 10 places are nominally available ONLY 3 are actually filled.

Representing Bridlington is a guy called Martyn Coltman, who runs a company called Burlington Design. Coltman is not a Board member because he owns a qualifying business/property. Oh, no. He has bought his membership of the YCBID Board by voluntarily paying the Levy.

Next up is Jayne Nendick, representing that hive of business activity on the Yorkshire Coast, Withernsea. Nendick is CEO of a company called The Shores Centre. Again, like Coltman, she does not own a business or property which qualifies to pay the Levy. Instead she, for some bizarre reason, voluntarily pays the Levy in order to gain her place on the Board.

Last up is a guy called John Harding who represents the Coastal Villages. Harding is a Director of Great Yorkshire Radio, whatever that is, and again has no qualifying property/business in the BID area; he too voluntarily pays the Levy in order to gain his place on the Board.

As can be seen, although the local BID is called the Yorkshire Coast DBID there are NO REPRESENTATIVES from Scarborough, Whitby or Filey on the Board

Strange, I hear you say. Well, yes. But not really.

Although when YCBID was set up, there were representatives from all these towns on the Board, these individuals soon realised that the whole YCBID was a complete ‘con job’ and promptly resigned, not wishing, one assumes (unlike Coltman, Nendick and Harding), to have their good names sullied by being associated with an organisation which has been repeatedly referred to as nothing more than a Mafia-style extortion racket.

Those who resigned are very sensible and principled people, one might say.

As referenced above, there are three places on the YCBID board allocated to ‘national’ organisations.

How these three ‘national’ organisation places were assigned to the three organisations who currently have a Board place is completely unknown. Indeed, in two cases it must be questioned whether the organisations given places are, in fact, even ‘national’.

Anyway, be that as it may, somehow a guy called Ben Gilligan, who is Operations Manager for East Yorkshire Motor Services (EYMS), a company based in Hull, well outside the YCBID area and hardly a ‘national’ company, managed to get himself invited to join the Board – perhaps on the basis of his former membership of a DBID in Sheffield, from which he resigned shortly before joining YCBID.

Again, Mr Gilligan pays to have his place on the Board, and, as many will have seen, he has come under a considerable amount of criticism for using his company’s buses to provide services to the BID, paid for, of course, by Levy-payers.

The stench from the kippers is wafting about again.

Then we have Ms Mo Driffield, a manager from Marks & Spencers (M&S). Now although it is true that M&S is a ‘national’ chain and of course has stores all over the place, as far as I can ascertain M&S only has one store, Scarborough, in the DBID area. Why, therefore, having only one store, should gain M&S a place on the YCBID board (rather than, say, the Co-Op – which has 12 stores in the BID area), is again something of a mystery.

M&S’s association with BIDs has also come in for a certain amount of criticism. The M&S representative on the Experience Guildford DBID, for example, has come in for some stick recently from the Guildford business community, as it seems the local M&S has been awarded a ‘consumer service award’, which some consider was awarded principally because they had a place on the DBID board.

Not, it seems, that our Mo will be unduly bothered about what her fellow YCBID Board members are up to, or indeed what is happening in other DBID areas, as she has not attended a Board meeting since January 2020.

Could her inclusion on the Board, therefore, be a case of “It is not what you know, but who you know”? I leave you, dear reader, to ponder.

Lastly, we have Mr Pete Gibson, General Manager of Cayton Bay Resorts (CBR). Now I will be honest and say up front that I don’t know that much about Cayton Bay Resorts. However, the name suggests to me that they are based at the pretty little hamlet of Cayton Bay. Their premises at Cayton Bay could, of course, be the headquarters of a huge ‘national’ chain of seaside resorts, I would not know, and I suspect not many people know either, but my guess is that it is a local holiday camp.

Does this rather modest position on the pecking order of seaside holiday camps qualify Cayton Bay Resorts for a ‘national’ place on the £5 million gravy train, otherwise known as the YCBID?

Again, I leave you to ponder, dear reader.

Lastly, we come to the most unlikely members of our BID Board; the group of hangers-on who are collectively known as the public sector ‘Stakeholders’.

Perhaps the first thing to say about these Board places is that, currently, only three out of the five available to them are occupied.

There two Police Forces in the BID area, North Yorkshire Police (NYP) and Humberside Police (HP).  Only NYP, it seems, was allocated a place on the BID Board, although why they should have been offered a place on the Board of an organisation which is primarily concerned with improving local business is difficult to comprehend. However,  no doubt realising what a potentially dodgy outfit the BID was, NYP very wisely stayed well out of it and have never taken up Mr Rowe-Evans offer of a place.

Scarborough Borough Council (SBC), on the other hand, could not wait to get their man’s snout in the trough. Richard (‘the Brighton Binman’) Bradley was quickly appointed as the Council’s representative and served on the Board until SBC Chief Executive Mike Greene took the post off him when the Council voted that they had NO CONFIDENCE in the governance of YCBID. Sorry, Dick. No more gravy for you, it seems. 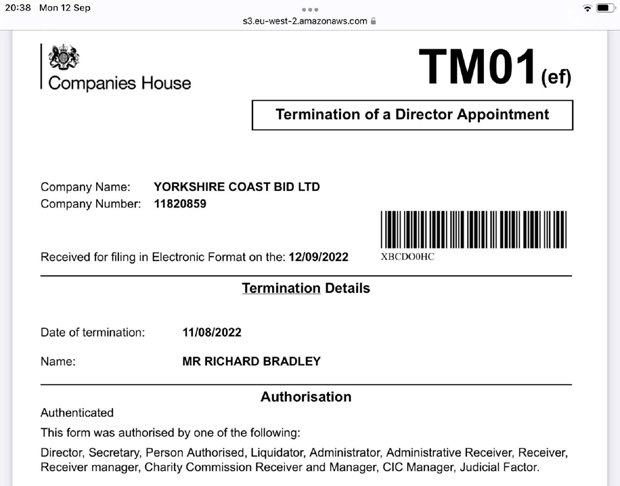 The North York Moors National Park (NYMNPA) however, have not been as choosy about who they hang out with as the North Yorkshire Police, and their man, Michael Graham, currently holds a place on the Board.

The NYMNPA appointment is again a little difficult to justify as they have no Levy-paying businesses or properties in the BID area. However, it is not what you know, but who you know – as the saying goes.

Consequently, Mr Graham is a Board member and presumably has his place on the YCBID Board paid for out of the charitable donations the public make to the NYMNPA. Nice work if you can get it, I say.

Next up is Karl Battersby, the representative from North Yorkshire County Council (NYCC). There seems to be no obvious justification for NYCC having a representative on the YCBID Board but it is supposed that the place was offered by Rowe-Evans to ensure that he had inside knowledge of NYCC’s thinking and any opportunities for additional funding that might come his way. Again, nice work if you can get it.

Finally we have Cllr Jane Evison, the board member representative from East Riding of Yorkshire Council. Evison is the only YCBID Board member who is a local government elected representative and again it is difficult to understand in what capacity she qualified for a place on the Board. Nonetheless, Evison has her place and the good ratepayers of ERYC will no doubt be footing the bill for her membership.

So there you have it. The magnificent nine volunteers who make up the YCBID Board.

However, what can be made of this motley crew is difficult to assimilate.

They certainly do not represent the views of the vast majority of the Yorkshire Coast’s business community.

They have, however, managed to consume an inordinate amount of Levy-payers’ cash in their three years of existence, gobbling up nearly £505,000 in salaries, expenses and operating costs.

The YCBID is, in the opinion of many of those who are forced to pay its Levy, nothing short of a Mafia-style extortion racket.

The bottom line is that these NINE relative nobodies, of no particular qualification or talent, are holding 1,365 businesses to ransom.

But how can this totally abhorrent, hated and despised organisation be abolished and its victims liberated from its money-grabbing clutches?

Easy. All that is required is for good men and women to stand up and say “Enough is enough. We will not passively stand by and watch YCBID bankrupt our local businesses any longer”.

Clive Rowe-Evans, there is the door. Go and do not come back.