Despite statutory clarification of the rights of members of the public to film/video/record Council Meetings, in force as of 6th August 2014, many of our local Councils are still actively engaged in discouraging members of the public from exercising their rights to film and record meetings.

Parish Councils have been particularly slow on the uptake – or fiercely resistant, to take a less charitable view.

Almost without exception in North Yorkshire, the Parish Councils have adopted guidelines prepared by the Yorkshire Local Councils Association (YLCA).

Unfortunately, these guidelines have been based not on law but on wishful thinking.

Let us clear up this nonsense once and for all.

Here are just two example clauses that presently appear in the Filming/Recording Policy documents of many Parish Councils in Yorkshire. No doubt similar ‘rules’ obtain around the country, but they are only that – ‘rules’ – not law. I have highlighted in bold type instances of these ‘rules’ going beyond the statutory authority of the Councils – in other words, having no legal authority whatsoever:

“Any person wishing to record a meeting in any format whatsoever must contact the Clerk prior to the start of the meeting. The Clerk’s details are set out in the public notice and agenda of the meeting; (or in his/her absence, the contact will be the Deputy Clerk or Chairman of the Council).”

All recording must be overt (i.e. clearly visible to anyone at the meeting).

Hopefully, these two examples will suffice to demonstrate how Parish Councils are all too eagerly embracing guidelines from bodies like the YLCA and the National Association of Local Councils (NALC) that promulgates the notion of Councils granting conditional permission for filming – beyond the Council’s legal authority.

No such permission is necessary.

When a Council takes action beyond its legal authority, it is said to have acted ultra vires. This is illegal and addressable by the Courts – though no Parish Council is ever likely to be prosecuted. (Why not?). 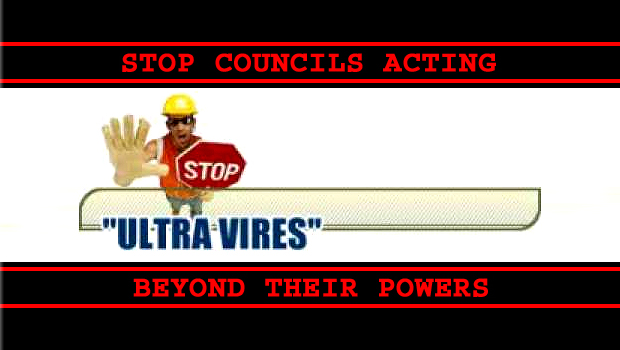 In recent weeks, I have been assisting fellow transparency campaigner Andy STRANGEWAY, who has been engaged in a productive correspondence with Sheena SPENCE, Chief Officer of the YLCA. This has resulted in a major re-write of the YLCA Guidance so that it no longer provides false and unreliable legal advice to Parish Councils in Yorkshire.

Against this background, readers may be surprised at some of the ‘requirements’ of the North Yorkshire County Council (NYCC) – where one might expect a more enlightened view to prevail – as delineated in their ‘Protocol on Audio/Visual Recordings at Meetings’ document, which I happened to stumble across quite by chance on the NYCC web-site recently.

I was shocked to see that its form of words is even more dissuasive to would-be Council-filmers than the hitherto deeply flawed YLCA Guidance to Parish Councils.

Andy STRANGEWAY has made a complaint to NYCC, pointing out the following example passages in the ‘Protocol on Audio/Visual Recordings at Meetings’ document that are without legal authorisation:

“some members of the public attending its meetings may not wish to be recorded. The Chairman of the meeting will facilitate this by ensuring that any such request not to be recorded is respected by those doing the recording.” [Preamble]

“Anyone wishing to record must contact, prior to the start of the meeting, the Democratic Services Officer“ [Item 1]

But the underlying questions here are these:

The very first sentence of the NYCC Constitution states:

“North Yorkshire County Council’s Constitution sets out how the Council operates, how
decisions are made and the procedures which are followed to ensure that these are efficient,
transparent and accountable to local people.”

It is difficult to see how the strongly dissuasive ethos of the ‘Protocol on Audio/Visual Recordings at Meetings’ document could possibly be described as a procedure “followed to ensure that these [the Council’s decisions] are efficient, transparent and accountable to local people”, since it sets all manner of obstacles in the path of those who wish to film Council meetings – and the Council has clearly gone some way beyond its statutory authority in the process of confabulating those obstacles.

This is the antiquated mind-set that campaigners (such as I and Andy Strangeway) are committed to eradicating from local government. Until that is achieved, words like “transparency” and “accountability” are just buzz-words without meaningful substance.

That is not good enough.