On 6th of May, elections will be held to determine who will be the next Police Fire & Crime Commissioner (PFCC) for North Yorkshire.

In this article, Tim Hicks interviews the only independent candidate Keith Tordoff MBE

The candidate’s comments are in italics below.

“I decided to stand for Police Fire and Crime Commissioner for North Yorkshire because I am passionate about Yorkshire and want to make a difference for people who live, work and visit North Yorkshire.

We are told that North Yorkshire is one of the safest places to live, so why is crime increasing? It doesn’t stack up. I want people to feel safe walking down the High Street, in the City Centre, their homes and rural areas. The 999 service works very well, but the 101 service does not.

I believe I can work with the Chief Constable and Chief Fire Officer, to improve both services and make them outstanding in all respects in the HM Inspectorate of Constabulary and Fire and Rescue Inspections.

I can also talk and meet with people to obtain consensus. I used this approach to work with the Dales and Bowland Bus Company stop the bus service to Nidderdale being cut by Transdev – Harrogate Bus Company and to introduce new services to Nidderdale funded through an appeal. I also had the first environmentally friendly all electric bus running on an official bus route in Nidderdale. I worked well with both Labour and Conservative MPs to achieve this. Because I have no allegiance to any particular party I can be more forceful in addressing local needs with central and local government.

I am a leader that works with teams. I received my MBE for services to business and the community in North Yorkshire.

I have sold my business on so I have no outside interests or distractions from working as PFCC. I will be giving up £20,000 of my salary to charity and will not claim expenses, I think the job is well paid enough as it is.

I have devoted myself to local communities and helped people from all walks of life from the youngest to the oldest and most vulnerable throughout my life. I have no vested political interest. I think it is important to remember that the original concept when PFCCs were introduced in 2012 was for someone to act as a bridge between the Police, Fire Service and the public. The role should not be party political.”

“I served for over twenty years in West Yorkshire Police in many roles and this experience means I have an understanding of current issues in policing.

I have close family members serving in the fire service. This means that I am concerned about current issues in the fire service and also have an awareness of policies and procedures. As an example, the North Yorkshire Fire and Rescue is the second worst funded fire service in the country and I want to change that.

I am not seeking to be a police officer again; I want to use my experience in the police, in business and in community service to keep on giving to the community. I believe my background gives me skill sets that suit me for the role of PFCC.

I have a lot of sympathy for the Chief Constable and Chief Fire Officer. Under the current system, the PFCC can hire and fire Chief Officers, which means they are constantly looking over their shoulder. One third of the Chief Officers in England and Wales are leaving at the PCC elections and I think this is because policing is becoming too politicised. Chief Constables now are not so experienced as a result. Political interference is unacceptable and the twin families in the police and fire service are better off with an independent PFCC who will be supportive of them. I hope to work with the Chief Officers to focus on improving services.”

“I think PFCC Mulligan has failed to inform about the role and that most people in North Yorkshire do not know what it entails. I think she should have issued more information on what she can or cannot do and has also been a PR failure with the media.

PFCC Mulligan is a Conservative politician who has toed the party political line. She has curbed police numbers and closed police stations. She has not put the case for the fire service, which is the second worst funded in the country. In some rural areas, if the retained firefighters are not available, householders have to rely on a manned fire station that is up to thirty minutes away.

I will not criticise the OPFCC. Any office is only as good as its leader and the support and administration he or she provides. If elected I will work with the staff in the OPFCC to improve morale and team working if necessary, and to improve their working environment.”

4.1. The refusal of North Yorkshire Police to investigate the murder of a woman in 1979 thought to be from Scarborough and the response of PFCC Mulligan to this. http://nyenquirer.uk/toms-matter-1/

4.2. The Chief Constable’s policy of not prosecuting police officers for breaches of the Coronavirus Lockdown Regulations and being asleep on duty, and the response of PFCC Mulligan to this. http://nyenquirer.uk/sleeping-beauties/

“I am not going to criticise any specific aspects of policing until I have been elected and had the opportunity to consider individual issues. I cannot comment on these matters and will not criticise without looking into them, if asked, when and if elected.”

“I am proud to say I am Yorkshire born and bred and have lived here all my life.

I started my working life as a Constable in West Yorkshire Police in 1973, serving as a neighbourhood policeman, member of the WYP task force which involved me in major incidents all over the county and the investigation into the mass murderer Peter Sutcliffe’s reign of terror. I then went on to be a firearms team leader, detective, Sergeant in Uniform Branch and finished my career as a senior officer. I received several commendations from the Chief Constable and Crown Court and had a certificate of exemplary conduct on my retirement, which I still have and cherish. I also received a national lifesaving award.

I met my wife Gloria when she was a police officer in West Yorkshire Police, we have one son.

After leaving the police I had a career in business as lead fraud investigator in the Bank of Scotland North Eastern region, investigating multi million pound frauds.

When I left Bank of Scotland I Chaired the Chamber of Trade for Nidderdale. When I started we had twelve empty shops and people said the High street could not be turned around. When I finished there were no empty shops, we were awarded best High Street in the UK and won the Yorkshire in Bloom competition and Gold in every category for the Royal Horticultural Society Britain in Bloom competition.

Gloria ran the Oldest Sweet Shop in the world at Pateley Bridge and we developed it into a world-wide online brand. We have sold it off now and I accepted a lower offer from a local man to maintain its local character. Gloria now runs ‘The Tordoff Gallery’ on Pateley Bridge High Street.” 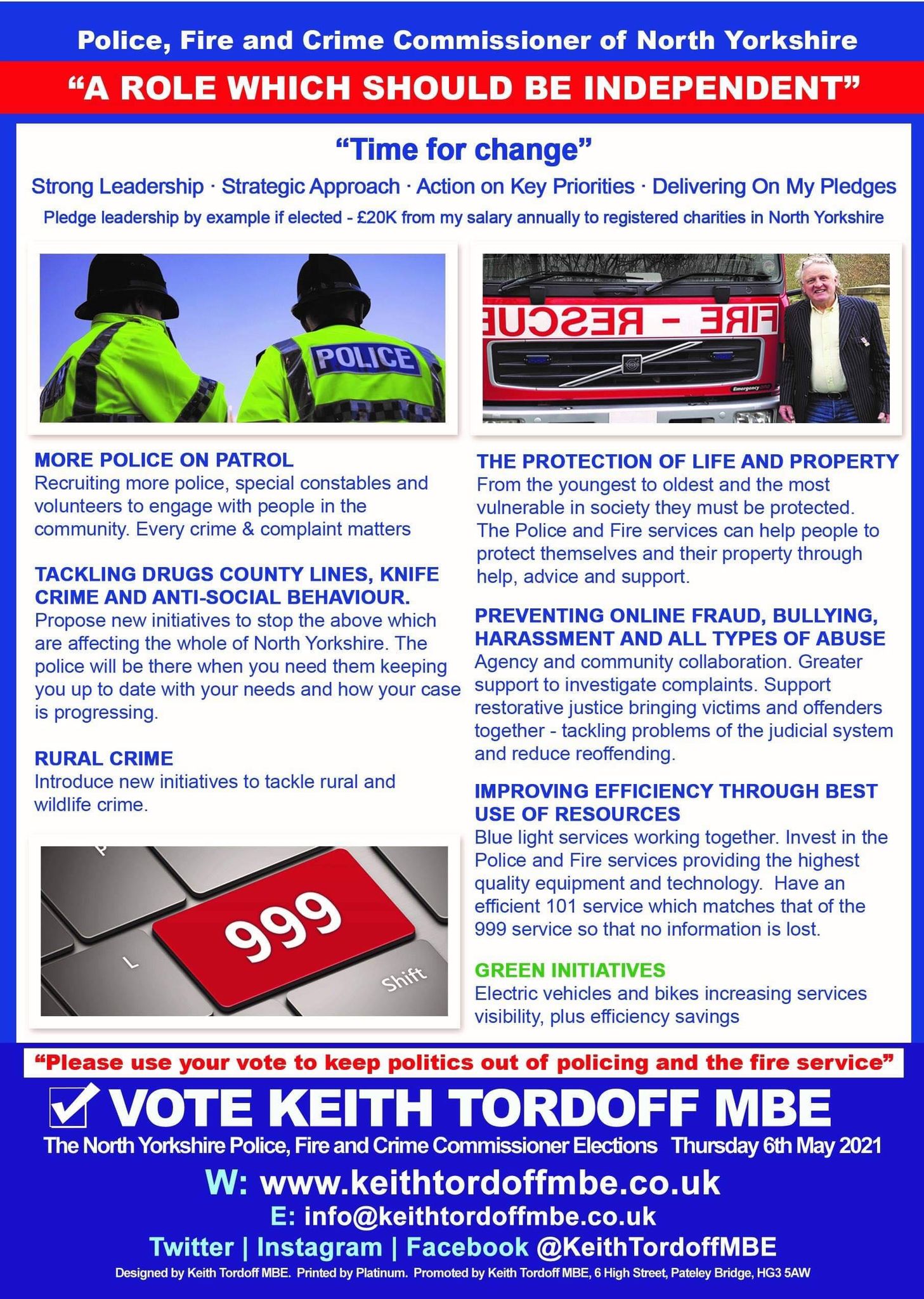