I write to you, in the public interest, in your capacity as Leader of North Yorkshire County Council, to appeal to you to set in motion the appropriate sequence of events pursuant to the process of striking predatory paedophile Peter JACONELLI from the County Council public record, and to issue a sincere and contrite apology to his many victims here in North Yorkshire for the harm and distress visited upon them by a prominent member of your Council (and Party).

I am sure you are acutely aware that my colleague Tim HICKS and I have led the field in exposing Peter JACONELLI’s grotesque criminal depravity through the pages of the Real Whitby Magazine and the North Yorks Enquirer, since October 2012.

In February 2013, then-Councillor Geoff EVANS (Scarborough Borough Council) publicly denounced Peter JACONELLI via thepages of the Scarborough News, and proud Scarborian Trevor HARRINGTON compounded Councillor EVANS’ allegations in a formal letter to SBC Chief Executive Jim DILLON – though, inexplicably, the latter did not bring the matter to Full Council, as his Constitution required.

Both Councillor Geoff EVANS and Trevor HARRINGTON had asserted that ‘the authorities’, including Councils and Police, were aware of Peter JACONELLI’s activities – but took no action.

I am sure that you must also be aware that the North Yorkshire Police subsequently established Operation Hibiscus as a localised instantiation of Operation Yewtree, tasked with the investigation of a large number of allegations against Peter JACONELLI (and others).

I was able to contribute to that investigation a significant quantity of information (by email – profusely – and in personal interviews, with Operation Hibiscus project leader [Acting] Detective Chief Superintendent Steve SMITH), for which I have been graciously thanked.

In February 2014, BBC ‘Inside Out’ presenter Chris JACKSON demonstrated unequivocally that our allegations were valid:

On 12th May 2014, the Scarborough News reported that the North Yorkshire Police, pursuant to the BBC disclosures, and having reported itself to the Independent Police Complaints Commission (IPCC), finally conceded that:

It is regrettable – and shameful – that it required over two years for Councillor Tom FOX – then Leader, now Mayor, of Scarborough – to provide, in this oblique manner, some sort of response to the questions I had been asking for over two years.

I have consistently maintained that Tom FOX, as a long-serving and high-ranking Police Officer in Scarborough (whose career closed while he was in command at Scarborough Police Station), has been less than candid on the subject of Police intelligence contemporaneous with Peter JACONELLI’s revolting offences. Yet everyone in Scarborough knew. I was warned against him by my mother in the late summer of 1956 – almost sixty years ago.

So it is difficult to avoid drawing a connection between Tom FOX’s marked personal reticence and the Council’s corporate intransigence on the matter of publishing a full and unreserved apology to the victim’s of Peter JACONELLI – even though an apology has been publicly petititioned by LibDem Prospective Parliamentary Candidate Michael BECKETT, with well over one hundred signatories in support (amongst whom, I know, are included victims of Peter JACONELLI).

On Boxing Day 2014, it was announced in the regional press, by Assistant Chief Constable Paul KENNEDY, that the Operation Hibiscus investigations had entirely vindicated our long-standing allegations. He stated:

No mention of an apology to the hundreds of victims who, from mistrust, did not come forward.

But even a reserved apology such as this has never been issued by Scarborough Borough Council. Nor has it ever been disclosed by the North Yorkshire Police precisely which Police Officers “missed opportunities”. Perhaps that is something that the Police & Crime Panel could actively pursue – for several of JACONELLI’s silent facilitators are still alive and susceptible to prosecution.

At a private meeting in Whitby on 11th December 2014, your deputy Chief Executive and Monitoring Officer Barry KHAN asked me to confirm that Peter JACONELLI had also been a member of North Yorkshire County Council – which he was.

Over half a year has elapsed since then. I have been hoping, in vain, that North Yorkshire County Council would at least follow the example of Scarborough Borough Council, by striking the ignominious name of Peter JACONELLI from the public record.

I have also been hoping that North Yorkshire County Council would go beyond Scarborough Borough Council’s limited and rather grudging response – and the reserved apology of the North Yorkshire Police – by making a sincere and contrite apology to the many victims who have been so badly betrayed by a series of lamentable failures in the authorities’ collective duty of care. One poor victim wept freely as he told me that, for more than forty years, he has considered himself to be irreparably sullied by Peter JACONELLI, feeling that he could never inflict his tainted sexuality upon a member of the gentler sex. Thus, he was weeping for the wife and children (and grandchildren) whom his horrendous experience at the hands of Peter JACONELLI has prevented him from ever knowing and loving. Such damage is irreparable. And unforgivable. There is no earthly remedy.

I was never, as boy or man, brutally buggered by a 20-stone judo black-belt authority-figure, Carl – and nor, I sincerely hope, were you. So it is perhaps beyond the sum of our imaginative capabilities to truly comprehend the long-term psychological trauma experienced by the victims of Peter JACONELLI.

What is within my capability, and yours, is to express our sorrow and regret – without any implied admission of personal guilt.

The fact remains that, as ACC Paul KENNEDY so movingly confessed, mistakes were made and opportunities were missed. For those “mistakes” and “missed opportunities”, a sincere apology represents very small penance.

So I call upon you, please, Carl, to set aside any personal animus you may hold against me in respect of my exposure of your Travel Expenses irregularities and to step up to the moral high ground by ensuring that the victims of Peter JACONELLI – who can never receive the natural justice owed to them – do, at least, receive a long-overdue expression of apology from North Yorkshire County Council and, with it, the all-important sense of ultimate vindication that, for so long and for so many, has been withheld by your hapless colleagues at Scarborough Borough Council.

Let the Council apologise, Carl; it is the right thing to do.

I look forward to you reply – and to publishing it into the public domain. Thank you for your consideration. 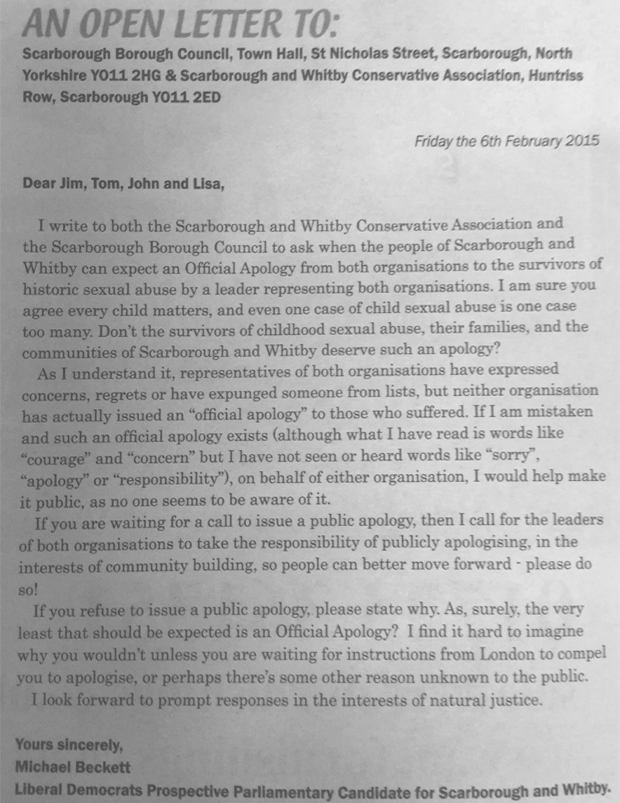