Many members of District/Borough Councils across North Yorkshire have been expressing the view that DEVOLUTION – the most far-reaching reformation of local government arrangements since the Local Government Act 1972 (which came into force on 1st April 1974) – should be set before the electorate in the form of a Referendum.

Anything less would fall well short of democracy – but that is the way it is going to be.

Some have likened the present process of resolving competing ‘models’ at Council level (rather than elector level) to the Scottish Parliament unilaterally declaring Independence from the United kingdom without reference to Scottish voters.

Having spoken with elected members from four of the seven Districts/Boroughs, I can confirm that Councillors themselves feel hopelessly inadequately informed to cast a vote on the subject. In the case of Scarborough Borough Council, members have complained that they have had only a single briefing (which many did not attend), devoid of detail upon which to reach an informed opinion.

Publication today of the £175K report by KPMG (each of the seven Districts/Boroughs has chucked £25K into a pot to pay KPMG to ‘big up’ the East/West ‘model’), provides more information than the hitherto most up-to-date information provided to members by Chief Exec Mike GREENE last week, reproduced here (followed by the KPMG Report and CEO Mike GREENE’s covering letter today): 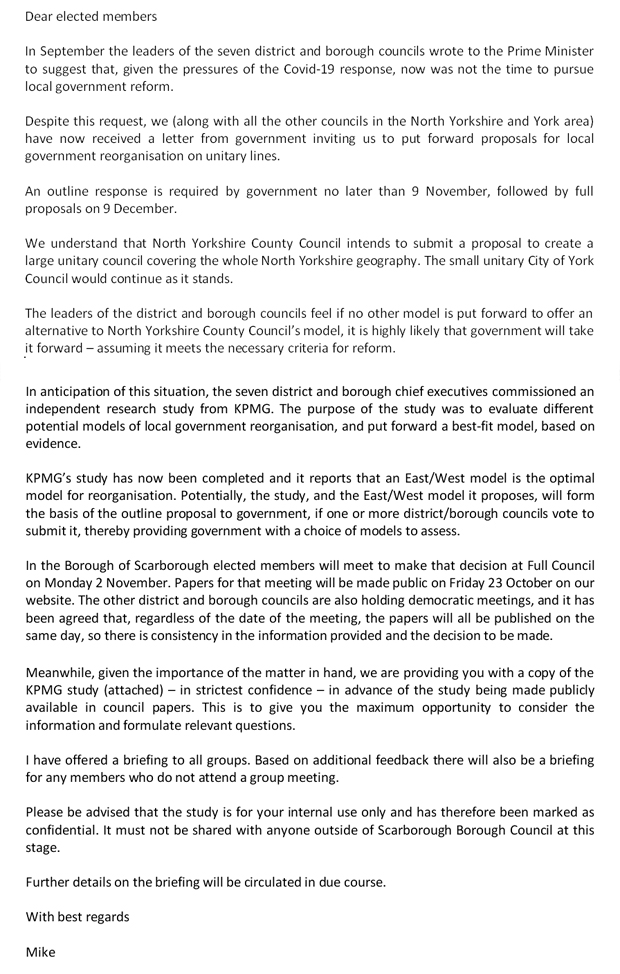