Scarborough Borough Council (SBC) has started the process of carrying out the long-held goal of razing the Futurist Theatre to the ground. The theatre, which once hosted The Beatles, first opened as a cinema in 1921. The historic theatre stands on Foreshore Road in Scarborough, just yards from the South Bay beach.

The plan to destroy the theatre was hatched over a decade ago by the council. The council stopped funding essential maintenance on the building and deliberately left to theatre to rot, to build the case for the demolition of the building in later years.

The council owns a plot of land adjacent to the theatre, which includes the Town Hall offices. The demolition of the theatre will likely see the council resurrect their plans to move from the St Nicholas offices.

The council was recently reprimanded by the Information Commissioner’s Office after FOI requests asking the council to fully detail the £7million prohibitive renovation figure it had put into the public domain went unanswered.

During further correspondence with the ICO, it transpired that the council appeared to have made up the £7million figure and had deliberately misled the public over the real cost of renovating the theatre.

Despite the availability of tens of millions of pounds for renovating theatres from government grants, the council has never applied for any grant funding and carried on with the long-held demolition goal.

The tender to demolish the theatre has appeared on the Yortender site. 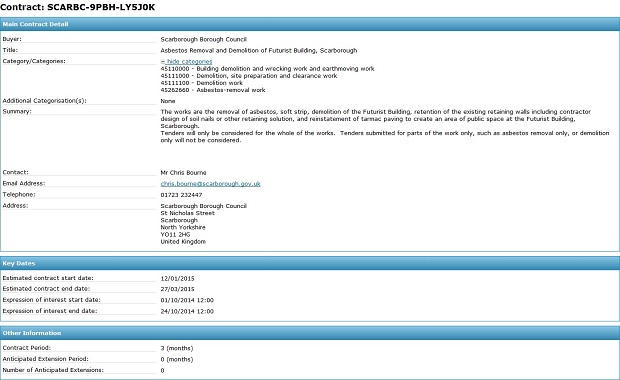