Levi Bellfield is one of the most notorious British serial killers of the last fifty years — his name alone evokes horror and revulsion, after committing a string of brutal attacks on women. His crimes are familiar to the public because they were covered in the major drama starring Martin Clunes, also entitled ‘Manhunt’. When I saw that the Senior Investigating Officer that led the investigation had published a book on it, I snapped it up and started reading.

It was a good buy. I only review a book if I can give a good review and recommendation to our readers. This is a very good book and I had no hesitation in asking the Editor to publish a review.

The author is Detective Chief Inspector (DCI) Colin Sutton, a career detective in the Metropolitan Police who led Operation Yeaddiss, the investigation of the murder of Miss Amélie Delagrange, a French citizen, who was found dying on Friday the 19th of August 2004 on Twickenham Green, London.

The book sets out the way the investigation into Amelie’s murder proceeded, along various lines of enquiry, including: 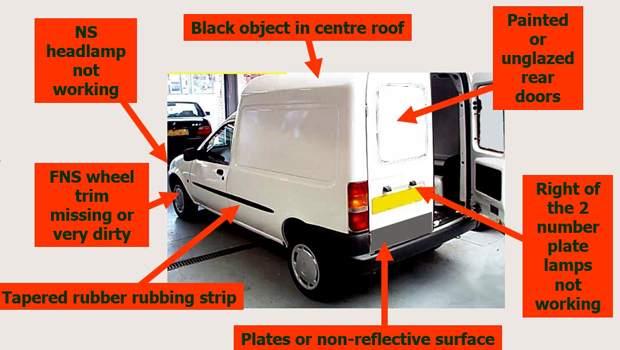 Photograph of a white Ford Courier van with the identifying features to assist police recognition.

The critical decision to arrest him, even though there was not enough evidence to charge him at that point is very well described. 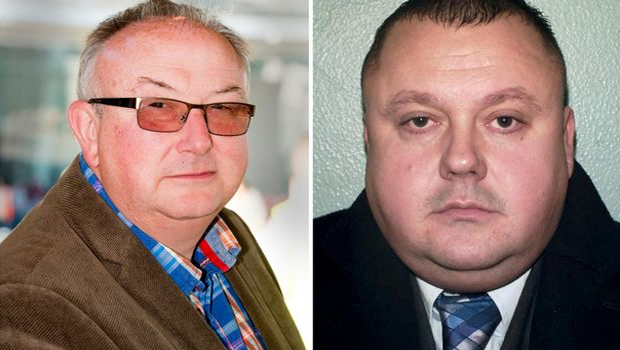 The description of the interrogation strategy worked out beforehand, to exploit every piece of information and knowledge about Bellfield to obtain evidence from him during his interrogation was fascinating. The primary objective was to charge Bellfield with a holding charge, so he could be questioned at length. Unfortunately the investigation had a major setback when the South American witness failed to identify Bellfield as her attacker. They recovered from this set back and exploited the extra time a suicide attempt by Bellfield requiring a hospital visit gave them, to interview three of Bellfield’s former partners and persuade them to give evidence against him. This resulted in him being charged with nine offences of rape, buggery and assault and being remanded in custody.

Despite having had Bellfield charged with serious offences and remanded in custody, the investigation nevertheless remained focussed on the primary task; conviction of Bellfield for the murder of Amélie Delagrange. Bellfield’s removal from the streets led to more witnesses coming forward and the detectives cleverly exploited this change, to develop more evidence on the Delagrange murder and the other serious crimes in the Metropolitan Police District (MPD) Operation Yeardiss had identified him as a suspect for. These were:

The author’s previous service with Surrey Police meant that he was familiar with the facts of the Millie Dowler case. He was the first to connect Bellfield to it, when he realised that Bellfield had access to a flat next to Station Avenue, Walton on Thames, where Millie Dowler had disappeared. A quick telephone call to one of his former colleagues in Surrey Police CID initiated the investigative chain that led to Bellfield’s conviction for Milly Dowler’s murder. The book then describes how after Bellfield’s arrest the author briefed the Surrey Police Team on Bellfield and re-focussed it away from a different prime suspect and onto Bellfield.

Nevertheless the prosecuting barrister refused to take the Milly Dowler case to trial alongside the Metropolitan Police cases, for lack of evidence. A major disappointment for the author and both the Surrey and Metropolitan teams of detectives.

The human aspect is also reported. The personal pressure on the author and his team was enormous, not just from a determination to obtain justice for Amélie Delagrange and the hours they were working. But also from knowing that they were in a race to arrest Bellfield before he killed again and that the consequence of any incorrect decision, could be loss of life and the end of his career as a detective. The highs and lows of the investigation are discussed; as are the emotions involved in participating in an investigation into brutal crimes committed by a ruthless sadist. Anger, sadness, disappointment, sympathy, frustration, self-doubt, an obsessive determination to obtain justice for the victims, but most of all, fear that Bellfield would kill again before he could be arrested.

Unusually for a Senior Police Officer, the author is openly and highly critical of failures in the investigative processes into Bellfield by both the Metropolitan and Surrey forces. He pulls no punches. His criticism is incisive, dispassionate and clearly set out. Particularly concerning is his description of the inexplicable failure to arrest and charge Bellfield with a rape committed in Battersea, the way Bellfield manipulated the police and the suspicion that Bellfield was operating as an unregistered informant for the Metropolitan Police.

As well as the course of the above Metropolitan Police investigations and liaison with Surrey Police, the book describes the conflicts, issues, administration and liaison tasks that a Senior Investigative Officer (SIO) on a major investigation has to deal with:

The description of the trail and legal argument is masterful. Especially the ordeal of brave Kate Sheedy at the hands of defence counsel, when she gave evidence against Bellfield in the Old Bailey. Bellfield was convicted of the murders of Amelie Legrande and Marsha McDonnell, and the attempted murder of Kate Sheedy. The jury failed to come to a verdict on the attempted murders of Anna-Maria Rennie and Irma Dragoshi. The Judge Her honour Mrs Justice Rafferty ordered that these charges and the nine charges of rape, buggery and assault Bellfield was originally charged with should lay on file, ready to be used again should his convictions be quashed on appeal. On the 25th of February 2008 she jailed Bellfield for life.

The penultimate chapter covers a number of other attacks on victims that Bellfield may have committed, which are well described. Along with the reasoning for deducing that Bellfield committed them. I thought this chapter was very well written, but that this aspect of Bellfield’s offending and life really deserves more attention, certainly more than could be provided in a work of this size and nature. The arguments for and against re-opening these cases and prosecuting Bellfield, even though he was by then incarcerated on a full life term are clearly and dispassionately set out.

The book is 313 pages long, with 14 colour photographs and one artist’s impression. My favourite photograph is of a white van with the individual specific features of the white Ford Courier van they were looking for identified on the photograph (shown above). This demonstrates the meticulous attention to detail that was applied to this aspect of the investigation. Although this was arguably the most important photograph in the Bellfield investigation, so far as I am aware, it has never been published before. There is also and one black and white reproduction of the letter sent to the Commissioner of the Metropolitan Police at the conclusion of Bellfield’s trial by Her Honour Mrs Justice Rafferty. In which she commended DCI Sutton and seven other police officers from his team for their part in the investigation.

Unfortunately, there is no map of the area showing where the murders took place or an index. However, these are not major failings and do not detract from the quality of the book. The above image is not from the book. It is included here as an example and to assist the reader by putting these events in geographical context. 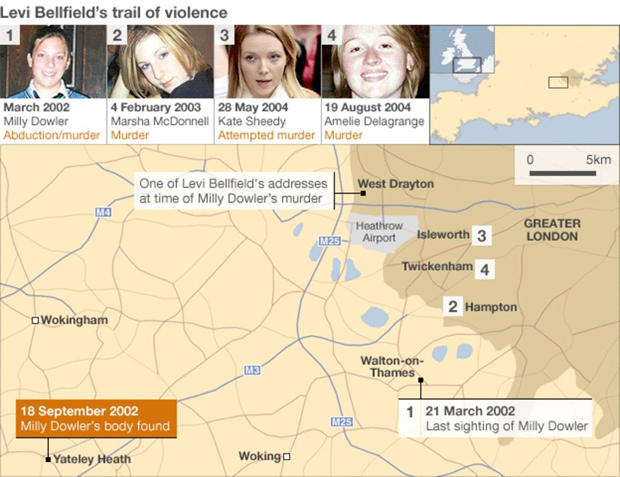 In my opinion “Manhunt” is a good book, well written and easy to read. It is a comprehensive account of all the aspects of convicting a serial killer in a complex multi force investigation, from the initial report of a crime through identification of a suspect, identifying and linking other crimes, arrest, interrogation, liaison with the prosecuting lawyers to obtain authority to charge, charging, trial and the subsequent antecedent investigation. I found it to be a gripping account of a complex multi-force investigation into multiple murders committed by a misogynistic serial killer.

The book is published by John Blake publishing price £8.99 and can be purchased from their website here. I have no hesitation in commending it, particularly to our readers that are police officers and aspire to be a SIO, or simply want to read a clear and comprehensive account of a successful investigation into a serial killer. In my opinion it should also be compulsory reading for crime journalists, so they have an understanding of the impact that irresponsible and unprofessional journalism can have on an investigation and trial.

For those of our readers that prefer information in audio visual format, this program includes interviews with many of the officers that investigated Bellfield. Link here.

Note on the Milly Dowler investigation

The Milly Dowler investigation by Surrey Police is not core to the book, but I have added a note to the review for readers to have a fuller understanding of the overall Levi Bellfield investigation. Following on from the decision not to charge Bellfield with the murder of Milly Dowler, Surrey Police carried on with their investigation. More evidence emerged, including the attempted abduction of eleven year old Rachel Cowles, also in the Surrey Force Area.

The day before he abducted Milly Dowler, Bellfield tried to persuade Rachel to get into his car. She was suspicious of him and refused to get in at which point a marked police car came into view and Bellfield drove off. She told her father who passed a very accurate description of Bellfield and the car he was driving to Surrey Police. Although this offence took place about a mile away from where Milly Dowler was abducted, Surrey Police did not connect it to Milly Dowler’s disappearance. It was only connected in 2005 following an appeal for information about the car Bellfield was driving, when Rachel’s Father wrote to Surrey Police and raised concerns that the two cases could be linked.

Eventually Surrey Police were able to amass enough evidence for Bellfield to be tried for both offences. He was convicted of Milly Dowling’s murder on the 23rd of June 2011 and received a second life sentence. He is the only serial killer to receive two life sentences, indicating just how dangerous he was.