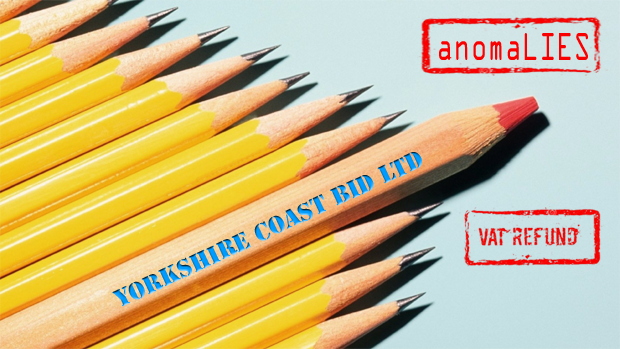 YCBID: Further Anomalies
A Letter to the Editor from regular correspondent WILLIAM PARKIN, who draws readers’ attention to further anomalies in the governance and accountability of the Yorkshire Coast BID.
~~~~~
Dear Sir,
Re: your article YCBID: The VAT Problem EXPOSED: http://nyenquirer.uk/ycbid-vat-problem/
Levy Payers on the Yorkshire Coast need to be thanking the team behind Stop the Yorkshire Coast Bid,  the Facebook presence of the Yorkshire Coast Levy Payers’ Association.
You, as the editor of many articles on this poorly run outfit, who again and again are proving by action (or is it inaction?) that they are there for an easy ride, do not understand entrepreneurship and are in it for their own gain, certainly not the direct benefit of the Levy Payers (Buses in Bridlington? Krampus event in Whitby?), also deserve Levy Payers’ gratitude
A massive thank you should also go to Scarborough entrepreneur, Mr James Corrigan, who has funded the exposure of the all-important VAT issue.
Looking at the document that YCBID classes as a Business Plan – https://www.yorkshirecoastbid.co.uk/wp-content/uploads/2019/10/Yorkshire-Coast-BID-Official-Business-Plan-2018.pdf – from Page 21, they state what they are going to do.
For Whitby and Scarborough, now in Year 4, I cannot see any of these projects having been fulfilled. How can the Directors think they are doing a wonderful job? They are proving they are inept. Or was it that the Business Plan was always a work of fiction? The BID Company seems to be out of control and not providing the promised results, with the Route YC a separate business that doesn’t have to be accountable to anyone other than its own Directors:
Perhaps the Council should be making sure that the issues exposed in my letter do not become the reality. Has there been a change of wording in the Articles of Association?  (When the BID Company is wound up, this separate company – Route YC – can still exist and money from the BID company could be transferred to it.
I doubt it as it has been advised to Companies House:
Scarborough Borough Council has stated that they are AGENT to the BID. They are not. It is the other way around. The BID runs the project on behalf of the two Principals – the Councils. See Article 4 of the Operating Agreement for Scarborough Borough Council:
For East Riding of Yorkshire Council, see Article 4.3:

Hopefully, your article – http://nyenquirer.uk/ycbid-vat-problem/ – will put to bed once and for all the BID company, with the two Councils needing to refund the Levy Payers’ money paid over, along with any Court Order costs and payments. This is becoming a cock-up similar to the Lendal Bridge saga in York:

Finally, in the Business Plan (Page 33), it states that there will be an AGM and Accounts will be published annually. Perhaps one of the Directors would like to reply to say when these have taken place and when the one for last year (Year 3) will take place with the published Accounts, which, had they been Audited, would have highlighted the VAT issue after Year 1.