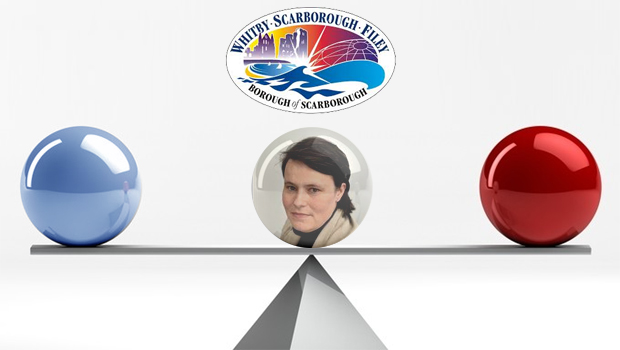 A Letter to the Editor from Scarborough Borough Councillor Michelle Donohue-Moncrieff [Ind.] (Hunmanby Ward), contemplating just how the Leader, Councillor Steve Siddons [Lab.], will contrive, with his minority administration, to achieve the necessary majority to pass the 2020/21 Budget, given his autocratic ‘micro-management’ style of leadership – and his frequent absences.

From Councillor Donohue-Moncrieff’s perspective, at least, the precarious alliance between Labour and the Independents looks less and less like a true coalition and more and more like a so-called ‘confidence and supply’ arrangement – like the Tories and the DUP; a precarious alliance indeed.

The new Council has now settled in after the inevitable initial teething problems of a new administration. We are now in the heavy lifting part of the Council year as consultations in relation to annual budget are about to begin with Councillors. Given the Council’s need to make significant savings in the region of £5m over 5 years, this process will have consequences for all residents in the Borough.

Over the last few months, new Councillors have been very eager to tell anyone who listens to them where they would spend more money. Many of the ideas are very worthy in themselves, while some, I have to say, are just weird.

Indeed, some have been rushing around like unicorns on crack cocaine singing, “Hey, Big Spender” – such is their ambition to spend your money.

There is one big problem! None of the Councillors can tell anyone how they would pay for it. One believed that the Council could make more investments, like buying the Travelodge building, and the money would just flow in. Given Scarborough Borough Council’s history investing your money, forgive me if I don’t get too excited about that idea.

In previous years, even though the level of cuts were drastic, this wasn’t as big an issue, as the failed former Leader of the Council, Cllr. Bastiman, had the numbers to pass a budget. It really didn’t matter what the of rest of the Councillors or the public thought about the budget; our words could do very little to stop the inevitable.

Fast forward to now and things have certainly changed. It would be easy to assume that the “arrangement” between the Labour and Independent Group should deliver the required votes to pass a budget. However, as someone who is in the Independent Group, I am not so sure.

You will notice that I don’t refer to the current administration as a coalition. That would imply a partnership and joint decision making between both sides. Sadly, in my view, the new Leader has not fostered such a relationship with the Independents, who he relies on to stay in power.

Why does it matter? Councils, unlike the Government, must produce a balanced budget. They can’t borrow for day-to-day spending. Over the next few weeks, the implications of this will be a harsh reality-check for many Councillors. Some are new Councillors but others have served for many years without the responsibility of getting a budget passed. Tough and perhaps unpopular decisions will have to be made.

I have always believed that you should only expend political capital in exchange for meaningful involvement in overall decision making. It is a trade off whereby you build alliances with other Councillors. This is an effective way for any Councillor to get things done for their community and the wider Borough.

Given the current state of affairs, how many of the big spenders will be prepared to take one for the new Council Leader?