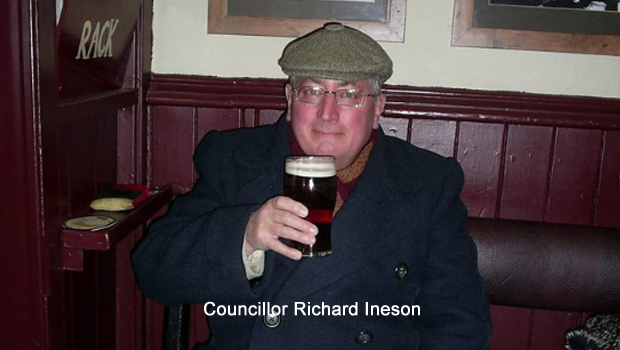 A Letter to the Editor from Richard INESON of Whitby, elected on Thursday to one of two vacant seats for the West Cliff ward of Whitby Town (Parish) Council, thanking his electors for their support.

To the people of the West Cliff of Whitby

Let me just say first of all, there has never been a more humbling moment in my life, I am not only humbled by the extent of what has happened in the recent WTC election, but also humbled by the support given to me by the people of the West Cliff.

Before all else, I would like to pay tribute to my worthy opponent in this election, Geoff Booth, who gave of his all and was defeated only by the narrowest of margins. Geoff is a fine man and I wish him luck in the future and hope to serve alongside him on WTC when, as he surely must, succeeds, in his election hopes.

To the people of the West Cliff, I consider the trust you have placed in me very heartening and I give you my word that I will do my utmost to justify your faith in me.

And now, all across Whitby, there are some people that I owe a great debt of thanks to. First of all, I must mention the regulars in the Black Horse who, when my enthusiasm flagged, were there for me, urging me to greater efforts, when my energy seemed to be completely spent, and victory beyond my grasp.

I just owe them an immeasurable debt of thanks.

And I must not forget the encouragement in this endeavour given to me by firstly, my family. I’m so grateful to them, for the love, for the support and for the hard work, and then my friends who have also worked tirelessly on my behalf, but most of all, the 108 people who took the trouble to go out and vote for me.

At times like these I always remember the words of Abraham Lincoln; the day after his election to the presidency, he gathered in his office the newsmen who had been covering his campaign and he said to them, “Well boys, you’re troubles are over now, mine have just begun.”

I think I know what he meant. Lincoln may have been concerned in the troubled times in which he became president but I don’t think he was afraid. He was ready to confront the problems and the troubles of a still youthful country, determined to seize the historic opportunity to change things.

And I am not frightened by what lies ahead and I don’t believe the people of the West Cliff are frightened by what lies ahead. Together, we’re going to do what has to be done. We’re going to put the West Cliff and Whitby back on the map.
I aim to try and tap that great Yorkshire spirit that made this County the greatest County in England, we have survived wars, depressions, floods, and many other things too numerous to mention, and we’ll survive the problems we face right now.

All I can say to all of you is thank you and thank you.

Thank you all, thanks very much.