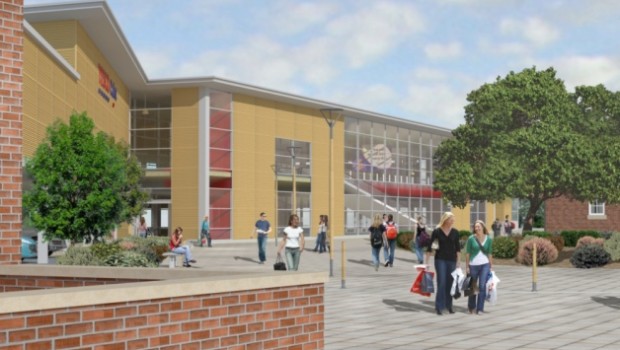 Scarborough Borough Council (SBC) has announced that they have received written notification from Tesco of their intention to withdraw from the purchase of the Council’s Depot on Dean Road, Scarborough.

“This news is clearly disappointing; council officers will now hold discussions with Assura, the company that owns the site adjacent to our depot, regarding the way forward.”

The news is a major headache for the Council as they were due to receive £10million from Tesco for the sale of the depot site. A significant amount of that money had already been allocated to other projects. The Council has already spent close to £4million building a new depot on Queen Margaret’s Road. Now they have a depot to spare!

The Assura land mentioned is the former St Mary’s Hospital site on Dean Road, which lies to the east of the SBC Depot. The two plots of land are separated by Trafalgar Street West.

The condition which wasn’t fulfilled is thought to relate to Tesco’s attempts to partially close Trafalgar Street West. Tesco applied to the DfT to partially close the road, to enable them to join up the two pieces of land and build the superstore.

The announcement ends a four year battle by Scarborough Town Against Tesco Store (STATS) to stop the retail giant from building a huge new superstore on Dean Road.

Tesco had previously obtained planning permission from SBC to build a new superstore on Dean Road. The campaign against the superstore by STATS resulted in the Planning Inspectorate holding a Public Inquiry over the proposed road closure.

The Public Inquiry into the proposed road closure was held on 15-18th October at The Spa with the Planning Inspector due to deliver his report to the DfT a couple of weeks ago. The result of the Public Inquiry is not yet in the public domain, but given the Tesco last minute withdrawal, it is thought that STATS had won the case.

Some interesting information emerged from the Public Inquiry regarding the proposed Tesco development. In her final summary, the Barrister acting for STATS, Miss Megan Thomas, said the Section 106 agreement between the Council, Tesco and Assura covering the development was potentially invalid.

For Local Authorities to exercise functions in a lawful manner, they need to abide by the terms and resolutions of their committees.

When planning permission was granted by SBC, the following was resolved by the Planning Committee:

“subject to the completion a S.106 Legal Agreement to cover the following matters”

” Re-instatement of the Listed Buildings […] The store shall not open to the public until the agreed works have been implemented in full.”

As you can see from page 11 of the S.106 agreement, it differs from what was resolved by the Planning Committee:

Obviously the Council has acted ultra vires, beyond their powers, in entering into the S.106 agreement. The SBC Planning Committee resolution only allowed planning permission to be issued if the Westwood Store ceased to open to the public.

Since no one has brought a legal challenge as to the validity of the planning permission and the time limit to bring such challenges has elapsed, it would be difficult to persuade the High Court to do so.

Under cross-examination by the STATS Barrister, the Traffic Engineer from Mouchel, acting for Tesco, admitted that the figures they’d sent out to people asking them to withdraw their letter of objection were inaccurate.

The traffic modeling that Mouchel had undertaken did not include any traffic from whatever type of store replaces the Tesco at Westwood. Nor had Mouchel taken into account traffic to the proposed Waterpark in the North Bay.

In 2009, SBC were responsible for the highways in the Borough. Quite why the information regarding the high levels of existing traffic on Columbus Ravine was not passed from the Highways Dept to the Planning Dept is unclear.

I posed a number of questions to SBC under the FOI Act and received the usual late response. SBC stated that information in the Development Brief was received from officers in a section of the Council which no longer exists. SBC claimed they no longer hold detailed information about transport following the termination of the Council’s Highways Agency agreement by North Yorkshire County Council in April 2011.

So, a four year catalogue of maladministration by SBC, coupled with a determination not to let the Council and Tesco cause massive traffic congestion across the North Side of Scarborough has eventually led to Tesco pulling out. A result for common sense.