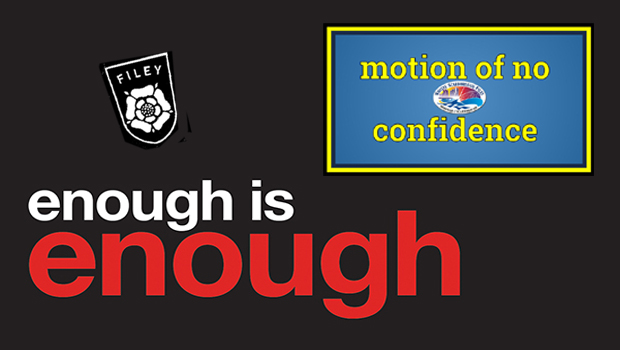 A Letter to the Editor (in fact, two for the price of one) from Tony GREEN, former SBC Officer, voicing the concerns of his community – Filey, Hunmanby and surrounding villages – as expressed in a letter from an unnamed Filey Town Councillor (enclosed).

In the course of my work, I received this letter today, and is included below in full. Having attended the meeting of the Filey Town Council (FTC) on this Wednesday 14 June to which it refers, I can confirm that this was the tone of the meeting and that two councillors deserve recognition for  refusing to compromise their standards in Public Office. This will be seen once the video recording of the proceedings are published. I think that this is a defining moment, a watershed if you will, of a long running battle between our own elected members and the North Korean style of governance prosecuted by certain members of the Scarborough Borough Council. Indeed, our own elected Cabinet Member who attends the meetings of the Filey Town Council, Cllr Cockerill, becomes increasingly arrogant in his attempts to avoid answering questions put to him. So much so, that I have to question the amount of support that he gives to the electorate of Filey. Perhaps at the next bout of elections this subject will reappear.

Having been approached a little while ago by concerned members of the public, I took opinion and soundings. One of these subjects was the Southdene development. These were distilled into questions that I put as a Chargepayer to Cllr Cockerill who has steadfastly refused to answer them under the caveat of having answered them previously, which he has not. The result being that I have advised him, that in my opinion as an elected Councillor, that he is a disgrace.  So this only proves that not only can our own elected members NOT obtain satisfactory responses while tending to the elector’s interests, but individuals are unable to do so.

Elected members should recognise that they are servants of the public, elected by them and when they go about their daily Council business, the most important persons that they will meet on that day are the electorate who put them there. What have they got to hide?

Having said that, I now include the letter I received today which is both illuminating and an insight into how dedicated Filey Town Councillors fight tooth and nail on behalf of our community. In this letter, there is a reference to a ‘closed door meeting’, a ‘preferred tenderer’, a lack of investment for Filey and what I take from it to mean as a suppression of correspondence. I would be pleased if you would give due regard to what is written below:

The vote of No Confidence in SBC Cabinet, Leader and Chief Executive (CE) was a result of extreme frustration experienced by FTC, myself and members of the general Filey populace, in the lack of Capital Expenditure within the town, lack of response to queries from SBC, and a general feeling of neglect by SBC.This was perhaps precipitated by the £9 million loan to the North Bay development, the £6 million borrowing for the Weaponness Sports Village and the £4 million to demolish the Futurist,

Whenever Filey asked for money ‘there was none in the pot’, yet there always seems to be plenty to spend in Scarborough.We are desperate for Community, Sports and Leisure facilities in the town to serve the whole of the southern area of the Borough, and have been for many, many years.Weaponness is inaccessible to Filey residents. Not only the practical problems in driving through Scarborough, and the costs involved, but public transport ceases at 1900 hrs. So anyone without transport is stuck anyway.

Weaponness was to be funded from the sale of the Filey Road Sports complex, the Filey Road Tennis Courts and the Seamer Road football ground. Subsequently SBC decided to take a £6 million loan to match fund the new swimming pool. However, the development is virtually complete yet the Tennis Courts are still for sale, as I believe, though I stand to be corrected, is the Sports complex. How and where has Weaponness been bridge-funded in the interim??

You know the story so I will not go on any further.Our assets have been stripped to fund spending in Scarborough and we cannot get answers to questions re: Southdene.

FTC sent a letter to the CE and Leader regarding the vote. At a subsequent FTC meeting Cllr. Cockerill stated he had full authority from the Cabinet to offer FTC a behind closed doors meeting, with the cabinet, to discuss our grievances. At the time I stated my objection to such a meeting. It was not only FTC, but the people of Filey who were complaining, and they deserved to be heard by the Cabinet. I could see no legal or other argument for the meeting to be secret. FTC were an ‘open and transparent’ Council and did not do things behind closed doors without good reason. A letter sent to FTC by the CEO and Leader stated they did not believe an open meeting would be productive. FTC sent a further letter stating our wish for an open and recorded meeting. Received a response similar to the first i.e. a closed meeting.

You heard my stance and reasons for not wanting such a meeting and my statement that I would not attend a closed meeting. It is far more sensible to hear the views of the residents, then discuss – rather than discuss without hearing the views. However, SBC are only too well aware of the problems.

What really is disturbing is the lack, within SBC, of any documentation relating to this Vote of No Confidence (NC.) I have checked the Cabinet and Full Council’s agendas and minutes and can find no reference to our letter regarding the Vote nor any subsequent letters. Nor indeed can I find any reference to Whitby’s Vote of NC. Cllr. Cross has confirmed that no reference has been made to our letter in any Full Council agenda standing item – ‘Letters to the Chief Exec’. I asked Cllr. Cockerill whether the authority he had been given was written or verbal, and why was there no recorded documentation. He refused, and continues to refuse, to give any information on the matter. At the May FTC meeting, FTC submitted a Freedom of Information (FOI) request to SBC for all information relating to this Vote of NC. The FOI was acknowledged but last night saw the end of the 20-day deadline. FTC last night therefore voted to submit a formal complaint (cannot remember the statutory body to whom it has to be submitted) regarding this matter if a letter was not received in the post this morning.

We have also submitted last night an FOI regarding the sale of Southdene. This FOI was to make clear we did not wish any contractor or other personal details, merely the value of the tenders received. Again, Cllr. Cockerill refuses to discuss the matter or give any details.

As an aside, Cllr. Mark Vesey, the Green Cllr. on SBC, has posted a link to a recent PR video produced by SBC on Facebook. Not only is Filey not mentioned during the 5 mins of the short version but the video states that Flamingoland WILL come to the Futurist site and bring £20 million of development costs into Scarborough.  Mark Vesey questions whether planning permission has been granted yet. BUT, you will recall that Cllr Cockerill stated categorically in a past FTC meeting, and confirmed again last night [Wednesday 14th June 2017], ‘that no contracts had been signed or completed for the Futurist site, though Flamingoland were the preferred tenderer’. He confirmed he was aware of the PR video but denied any knowledge of the statement, in the video, that Flamingland WILL come to Scarborough. I find this hard to believe as he had picked up the lack of mention of Filey. The video also states that the will be a 7 screen multiplex at the North Bay development. Given the professional quality of the video I would suggest it has taken quite a while to produce and was made prior to planning permission being granted for the North Bay cinema. I am still unsure whether this video is the draft or final version, as Cllr. Cockerill indicated there was a draft he had seen and commented on regarding lack of mention of Filey.