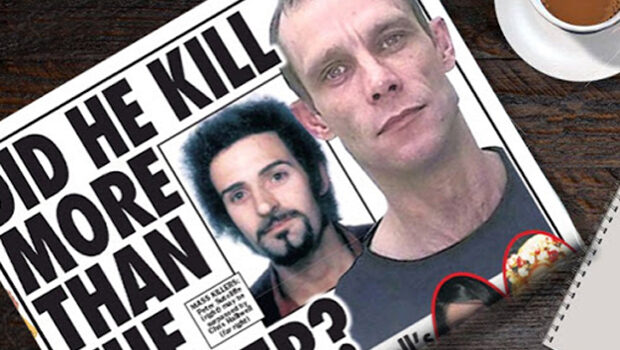 by CHRIS CLARK and TIM HICKS

The murders of Mrs Trevaline Evans and Mrs Ann Heron

Mrs Trevaline Evans was aged fifty two, happily married and ran an antique shop in Llangollen, North Wales. On Saturday the 16th of June 1990, she vanished. North Wales Police (NWP) has declared her disappearance as a “no body murder”.

The full story including the Crimewatch reconstruction is covered in this NYE article: Trevaline Evans and Ann Heron. Was it Halliwell Part 1

Less than two months later on Friday the 3rd of August 1990 Mrs Ann Heron aged forty four was murdered. She had been sunbathing in a bikini the front of her home -an isolated property situated just outside Darlington. Her body was found by her husband Peter at about 6.00 p.m.in a pool of blood in the lounge. She was naked from the waist down, her bikini bottom was never found. The autopsy established that her throat had been cut with a weapon like a Stanley knife or a cut throat razor. There was no sign of forced entry. The front door was open, the house had not been ransacked and nothing had been stolen.

The full story including the Crimewatch reconstruction is covered in this NYE article: Trevaline Evans and Ann Heron. Was it Halliwell?

In the above two articles, the authors put forward their view that serial killer Christopher Halliwell (Pictured in the lead illustration) – who is believed to have been living at Aughton Park, Lancs at the time – should be considered as a suspect in both murders.

The Role of the Media in Cold Cases

The media have a duty to act benevolently for the benefit of the community and to work closely with the Police to assist them in investigations. This is particularly true in cold cases, where Media coverage is one of the three key factors in progressing them. (The other two are advances in forensic techniques and changes in loyalties among the perpetrator(s), and his friends, leading to one of them becoming an informant). Accordingly the media must do everything it can to keep the case in the public eye, to support the Police investigation by generating additional interest and information.

The best form of media for this is local media, because it is seen as part of the community, is more approachable and has a different readership to national media.

Operation Scholar: A good Case Study on the role of the Media in Cold Cases

This is covered very well by the award winning journalist Martin Bright in this documentary on his investigation with retired detective Liam McAuley into the suspicious disappearance of Surrey schoolgirl Ruth Wilson at 14.32. (Guardian article here, Daily Mail article here).

The Surrey Police Media Relations Department understands the importance of continuing media coverage of cold cases. It very helpfully issued this statement to the NYE on the case:

Surrey Police continues to carry out annual reviews into Operation Scholar, the investigation following the disappearance of Ruth Wilson, aged 16 from Betchworth in November 1995. This includes a detailed re-investigation between 2018 and 2019.

Surrey Police continues to keep an open mind about what is behind Ruth’s disappearance. At this time there is no further evidence to support any one particular line of enquiry about what has happened to Ruth.

If you have any information that could assist our investigation into Ruth’s disappearance, please contact us through the webchat on our website www.surrey.police.uk, send us a direct message through our Facebook or Twitter pages, or call 101.

In the case of the murder of Trevaline Evans, the main local media outlet in North Wales is the Daily Post, which has consistently worked to keep the case in the public eye. The reporter on the case is Steve Bagnall, an experienced journalist, with a meticulous eye for detail.

Steve also ran an article raising the possibility that Halliwell may be the killer of Trevaline Evans. Article here.

The lead force on the Halliwell investigation is Wiltshire Police, so typical of his methodical approach, Steve contacted North Wales Police and Wiltshire Constabulary for a media comment. Wiltshire Police confirmed to the Daily Post that it is open minded about Halliwell being responsible for the murder of Trevaline Evans and Ann Heron:

“Although we are not currently investigating any offences alleged to have been committed by Halliwell, at the time of his arrest, all forces were notified of the circumstances of both murders [Becky Godden-Edwards 2003 and Sian O’Callaghan 2011] and importantly, the facts that were known at that time.

This is in line with good investigative practice and is recognised by Senior Investigating Officers across the country as appropriate action to take.

Furthermore, engagement with the National Crime Agency throughout ensured that the investigation which secured Halliwell’s conviction was shared with other organisations accessing the NCA services for homicide enquiries and this close liaison remains ongoing.

We intend to continue this transparent approach with other forces and sharing of best practice.”

He then ran a follow up article, which can be read here.

Steve’s article contains an appeal for information and is a classic example of good local journalism serving the community by keeping the case in the public eye. Hopefully generating interest and additional witnesses, to help further the investigation.

The murder of Trevaline Evans: NYE follows up

The authors forwarded their article on the murder of Trevaline Evans to North Wales Police and wrote to them suggesting the following lines of enquiry.

The authors are withholding this information because they do not want to cause distress to Mrs Evans’ family.

During the investigation into Christopher Halliwell, Wiltshire Police found a stash of women’s clothing at a River at Ramsbury, Wilts. This is thought to be a trophy store of clothes taken from his victims that Halliwell would obtain perverse gratification from visiting. The authors suggested that this clothing is reviewed to ascertain if any of it belonged to Mrs Evans.

The authors suggested that the sketches are reviewed by officers of North Wales Police to establish if any of them are of locations in North Wales, Aughton Park in Lancashire, The North York Moors, Scaling Dam or the Kilburn White Horse in North Yorkshire, Blenheim Palace, Backwell in Somerset, the Cotswolds, or Mam Tor in Derbyshire.

The authors believe the murder of Mrs Evans may be linked to the murder of Mrs Ann Heron in Durham. Mrs Evans disappeared on the 16th of June 1990; Mrs Heron was murdered less than two months later on the 3rd of August 1990. In both cases a light blue four door vehicle was seen and featured prominently in both enquiries.

The image below is from the Crimewatch reconstruction of the murder of Mrs Evans showing the vehicle and a man who resembled Halliwell outside her antique shop. 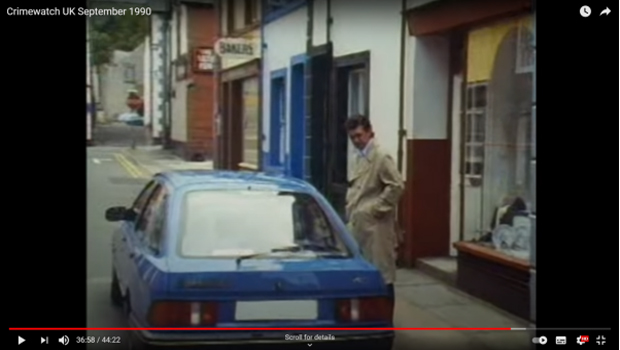 The image below is from the Crimewatch reconstruction of the murder of Mrs Heron, showing some makes of car the police believe could be the one seen speeding away from the scene of Mrs Heron’s murder. 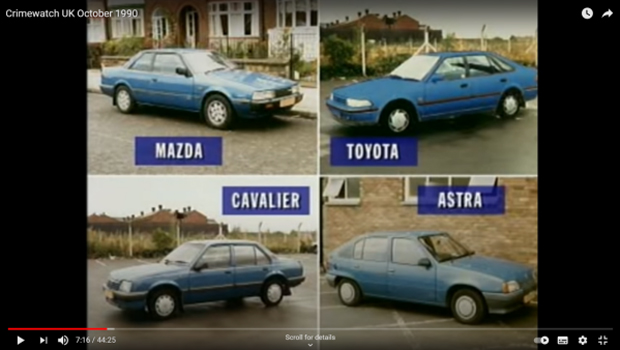 In summary, the connections between Halliwell and the two murders are:

We suggested that this is examined jointly with Durham Constabulary.

Christopher Halliwell apparently lived at Aughton Park, Lancashire, and, according to media reports, worked in North Wales. Both Detective Superintendent Sean Memory and Detective Superintendent Fulcher who investigated Halliwell are quite clear that he was a serial killer and had other victims than the two he was convicted of murdering. If indeed he was working in North Wales it must be a credible concern that he may have committed other attacks there.

The authors suggested that Halliwell is interviewed in prison to ascertain if possible what his movements were in the period that he was resident at Aughton Park and that the Trevaline Evans murder is put to him as a crime that he is responsible for.

The response of North Wales Police

Both authors are very pleased that North Wales Police is looking into the possibility that Halliwell should be a suspect in the murder of Mrs Evans and is willing to exploit media coverage.

The case is of immense public interest in Wales and it is clear that NWP has never given up on its efforts to arrest the murderer.

If so, then he could still be alive and well, and living locally, posing a serious ongoing threat to women in the area.

That is why it is essential that the media continue to raise the case in the hope of producing fresh evidence and resolving this case. 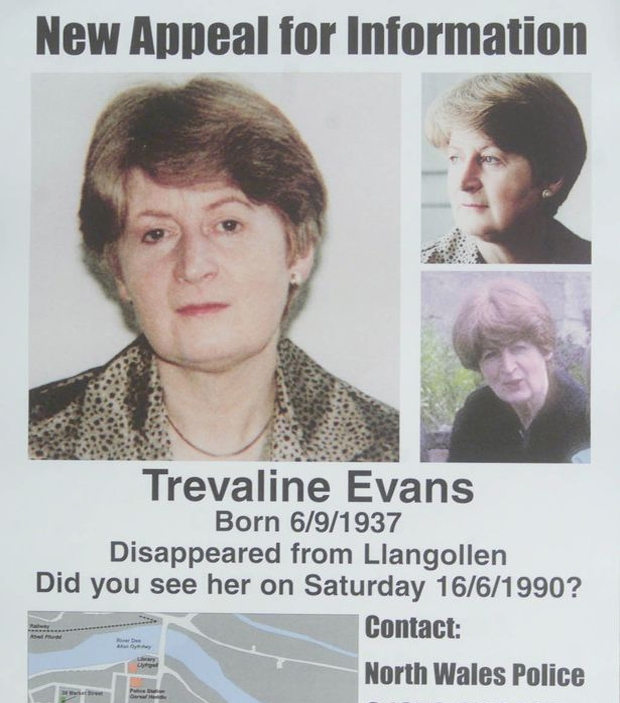 Halliwell: The wider picture and the North Yorkshire connection

Halliwell was a very capable serial killer. He was ruthless, forensically aware, capable of planning, surveillance aware, changed cars regularly, physically fit, highly proficient with a knife from his training as a butcher and in quickly concealing a body by burying it from his work as a groundsman and grave digger.

It appears irrefutable that Christopher Halliwell was operating nationally and undetected for many years. Based on admissions Halliwell made to a cell mate In HMP Dartmoor in about 1985 or 1986, the authors believe he killed his first victim in the period 1982 – 1985. The authors believe it is entirely possible that he could have killed many more victims than Yorkshire Ripper Peter Sutcliffe.

His itinerant lifestyle, hobbies of fishing and narrow boating, and his work as a builder, roofer, window cleaner, window fitter and driver took him all over the country.

The authors have had sighting reports of Halliwell in North Yorkshire and he has been suggested as a suspect in the murder of Claudia Lawrence.

It is essential that the media and the police work together to try and identify Halliwell’s movements and the full range of his crimes, so cold cases can be resolved and some relief brought to the victim’s families.

Christopher Halliwell is pictured above in the lead illustration. He had a slim athletic build and spoke with a slight Swindon accent. You can see and hear him in the video here taken while he was in custody.

Did you see Christopher Halliwell?