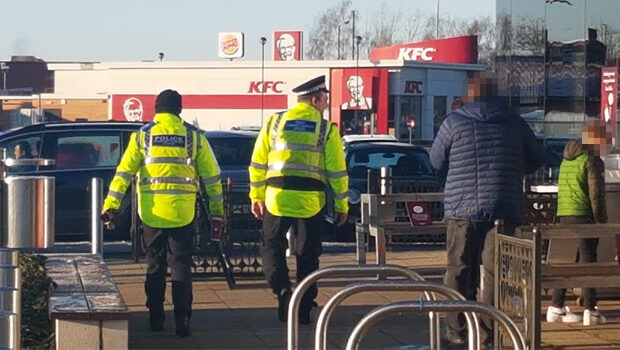 The NYE is doing everything it can to support the efforts of the vast majority of Police Officers who are trying to protect the public by policing the lockdown rules fairly, with tact and common sense.

However, occasionally a Police Officer or a prominent public figure breaches the regulations and when this happens, it is our policy to draw attention to this.

To facilitate this we have included this appeal for information in some articles:

In response to this appeal, one of our readers recently observed two Officers from North Yorkshire Police (NYP) in York who were openly wandering around without masks and ignoring social distancing at Clifton Moor, York. She put them under surveillance, followed them around, photographed them and delivered a series of photographs (shown above and below) and a report to the NYE, via the above email address.

“On the morning of Sunday the 10th of January I saw two policemen stood around the door of Greggs Bakery at Clifton Moor. Customers waiting to go into the bakery were queuing next to them. One of them bought a coffee, looks like from Costa. They then walked around Clifton Moor shopping centre without masks, patrolling Clifton Moor by foot without social distancing. One of the Police Officers had a Flat Cap, so he may be higher ranking. He had an earpiece. ”

The Officers are thought to be from Fulford Road Police Station, York and I would appeal for any other witnesses that saw them in Greggs the Bakers or Costa, or who recognise them to come forward, so I can fully identify them and obtain more witnesses. 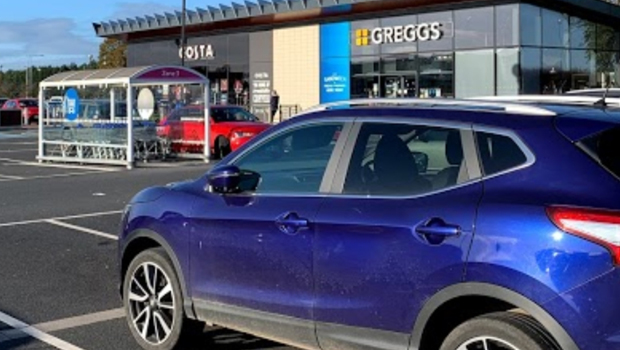 I am very firmly of the opinion that the NYE readership is intelligent and enquiring, and takes the time to ensure it is well informed on current affairs at a local and national level. However, successfully conducting a surveillance mission on two police officers and photographing them covertly, while following them without being detected, really does demonstrate just how capable our readers are.

This is dangerous work. Police officers are authority figures and do not like being confronted with their own misconduct. This video shows a member of the public pointing out to police officers that they were blatantly breaching the coronavirus regulations. Incredibly, they admitted this, verbally abused him, then closed up to him without face masks and did not put face masks on when this was pointed out to them. Video here.

Assessment of this information

There was no reason why the two Officers could not wear masks and social distance – the same as everyone else – when queuing, talking to members of the public, buying coffee, or patrolling as shown above.

Quite apart from the fact that both Officers were unmasked and didn’t bother maintaining social distancing; one of them was walking around drinking coffee and not properly dressed wearing his uniform cap, the other had his uniform cap tilted backwards.

What sort of image of NYP does this slovenly and unprofessional conduct project to the public?

The image below shows an Officer of the Metropolitan Police properly and smartly dressed and wearing a mask on patrol. The way it should be. 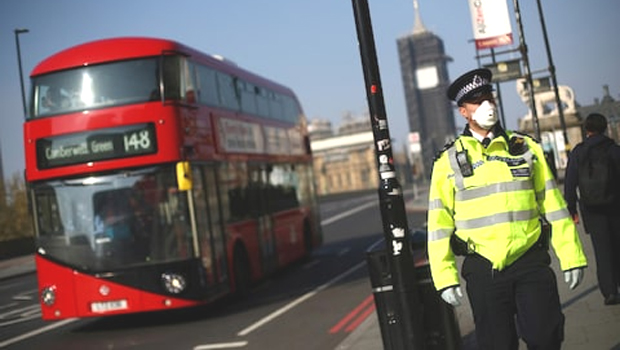 Why can’t North Yorkshire Police maintain the same standards of turnout and professionalism the Met maintains?

It seems to me that both officers were probably in breach of the lockdown regulations. They were certainly setting an extremely bad example and needlessly risking becoming infected or endangering the public by infecting other people. This is at a time when hospitals in York are becoming overwhelmed. BBC report here.

NYE takes immediate action in the public interest to protect Police Officers, staff and the public from these officers

The nature of their duties puts police officers at a higher risk of infection than the public. They can’t work from home and sometimes have to go into close contact to make arrests.

According to this November BBC article, eight-hundred-and-forty-nine Police Officers have tested positive for coronavirus over twenty-four forces.

Irrespective of whether they are in breach of the lockdown regulations or not; from a practical perspective, the two Officers are obviously not taking rigorous precautions. These Officers risk infecting their families and everyone at Fulford Road Police Station. They are also publicly undermining the efforts of their colleagues to set an appropriate example and maintain public safety by upholding the lockdown regulations.

As soon as the report was received, it was clear to me that these two officers represented a threat to the health of their colleagues and the public. It only needs one of them to have an unmasked conversation with a COVID-19 carrier without observing social distancing to become infected and then to pass that infection on to his colleague, members of the public he encounters and his colleagues back at Fulford Road Police Station. In short he could become a one man epidemic.

Realising the gravity of the situation, I immediately wrote to Superintendent Walker (Gold Commander for North Yorkshire Police’s (NYP) response to the pandemic) with the above photograph and asked him bring it to the attention of the Senior Police Officer Commanding Fulford Road Police Station urgently and have both officers interviewed about their conduct.

I hope this will force them to wear masks and social distance themselves. Thereby reducing the possibility of these officers becoming infected and preventing them from infecting police officers and police staff at Fulford Road Police Station or members of the public, with the associated risk to their families.

I also hope the knowledge that police officers in North Yorkshire are under surveillance by NYE readers and will be exposed on the NYE website, will deter them from breaching the letter or the spirit of the lockdown regulations.

This is in the public interest and in the best interests of police officers. It also demonstrates the importance of having a local media outlet that exercises scrutiny over the police.

Four officers from Cleveland Police were seen by a NYE reader eating fish and chips on a bench in Whitby, without observing social distancing. This was reported to the NYE and we ran an article on it (here).

Needless to say, no action was taken against them.

Recently, Chief Constable Lisa Winward and Deputy Chief Constable Phil Cain have both been alleged to have committed transgressions of the COVID-19 regulations, which has attracted criticism in the national media, at the instigation of the NYE.

As Chief Police Officers they have a duty under the College of Policing Code of Ethics to set an appropriate example.

A complaint I made about them in June 2019 was simply ignored.

Neither has issued any statement, explanation or denial of the allegation raised in the NYE and the national press that they have breached the COVID-19 regulations and by doing so have undermined the efforts of the NHS and the police to protect the public. The implication of this is that de facto, it would appear both officers concede these allegations are accurate.

The NYE is a leading local media outlet, with thousands of readers in the North Yorkshire Police force area. It is holding the police to account over these apparent breaches, which is our duty as journalists. Chief Constable Winward has a duty to keep our readers informed and to respond to our concerns, but is refusing to comment.

Superintendent Walker was also asked for a media statement on the two Officers in the Clifton Moor shopping Mall on Sunday, but he has so far not responded.

So, sad to relate it also appears they do not accept that Police Officers are equal under the law, the same as everyone else and have a duty to be accountable to the public through the media and the Police complaints system.

Be that as it may, should either Officer issue a denial or clarification, I will of course ask that it is published in the NYE and issue a retraction.

But as it currently stands, on the face of it Chief Constable Winward appears to have abused her position to obtain preferential treatment for contravening the Coronavirus regulations and to have behaved as if the police are above the law. In short, it appears to be a perfect example of a failure to lead by example, or put another way “do as I say, not as I do”.

Until we do get an explanation from Chief Constable Winward, the NYE will continue to raise this issue.

A culture of impunity amongst North Yorkshire Police Officers.

This failure of leadership means that in real terms it is now impossible for any action to be taken against any police officer for breaching the coronavirus regulations in North Yorkshire. Because the Chief Constable will be seen to be punishing police officers for acts of misconduct that she has herself also committed, leading her open to allegations of hypocrisy and abuse of power.

The implication of this is that Chief Constable Winward’s conduct has led to a culture of impunity amongst police officers operating in North Yorkshire, hence the incident at Clifton Moor.

A classic example of failure of leadership leading to a breakdown in service discipline. 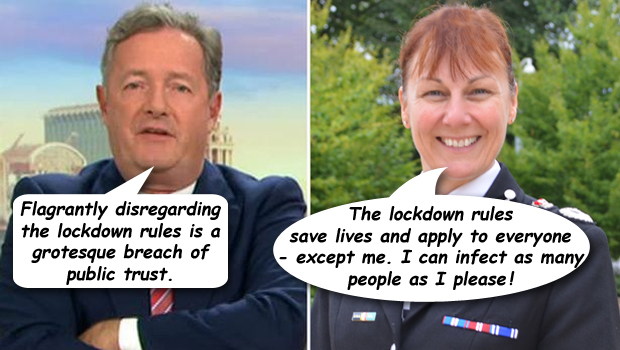 The enforcement of the Lockdown Regulations is controversial and is unfortunately causing widespread resentment against the police. Some examples:

I am not a fan of Nigel Farage, but I think he raises a valid point on this issue.

The public expect the police to uphold the law without fear or favour. It is completely unacceptable in a democracy for the Chief Constable to apply the lockdown regulations to the public, but not to herself and her officers. Put simply, you can’t discipline other people if you can’t discipline yourself or your subordinates.

This article from the NYP website Walkers rescued from Ingleborough in treacherous conditions describes a successful operation by NYP and Cave Rescue Volunteers to rescue a badly equipped couple on the weekend. Superintendent Walker said:

“Quite simply driving miles and miles, out of your village, town or city to visit an open space is not a necessary journey and is not acceptable.

Neither is arriving at a challenging walking location, inexperienced and unprepared in treacherous weather conditions. By making an irresponsible and ill-informed decision, the safety of others such as the Cave Rescue Organisation volunteers is also put in jeopardy and if any injury resulted, pressure upon already stretched NHS resources.”

North Yorkshire Police issued more than 70 fines over the weekend. This York Press article describes a series of successful operations by NYP to fine nineteen partygoers in Scarborough on the weekend.

If you become aware of a public figure or Police Officer breaching the lockdown rules, please photograph or video them using your mobile ‘phone and inform the NYE using the news@nyenquirer.uk email.