On Friday 15th May 2015, I submitted the following request to HPC for information under the terms of the Freedom of Information Act (FOIA) – a first step towards conducting a thorough-going examination of the Counci.

It is a statutory requirement that FOIA requests are fulfilled in toto within twenty working-days of receipt.

It follows, therefore that the last day upon which HPC Parish Clerk Carole BARKER could lawfully respond to my FOIA in toto was Friday 12th June 2015.

Yep. The Clerk responded at 11:27 on the last possible day – but did not provide any of the requested Grass-Cutting information (A), nor any of the Registers of Interests (B).

Following a firm prompt from me, the Clerk finally provided some of the Grass-Cutting information (not all) on Tuesday 16th June 2015.

The specification for the Grass-Cutting tender process looks like this: 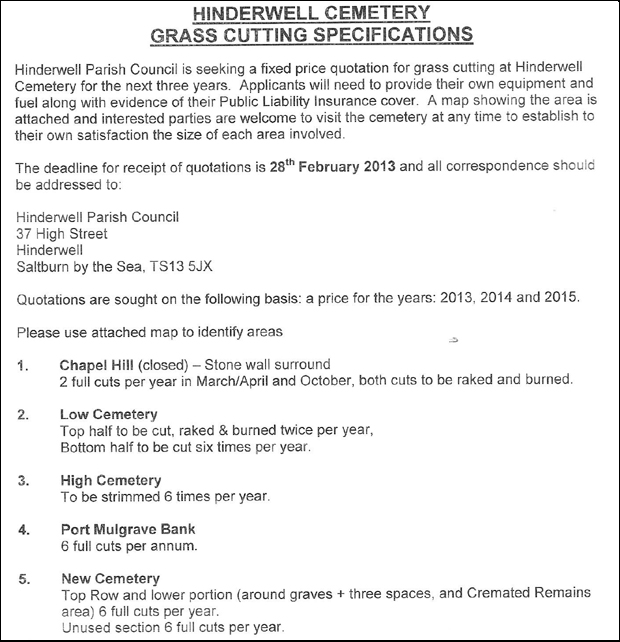 Predominantly to be cut (or strimmed), let us note, only six times per year – hardly a gargantuan task – with clippings to be burnt. 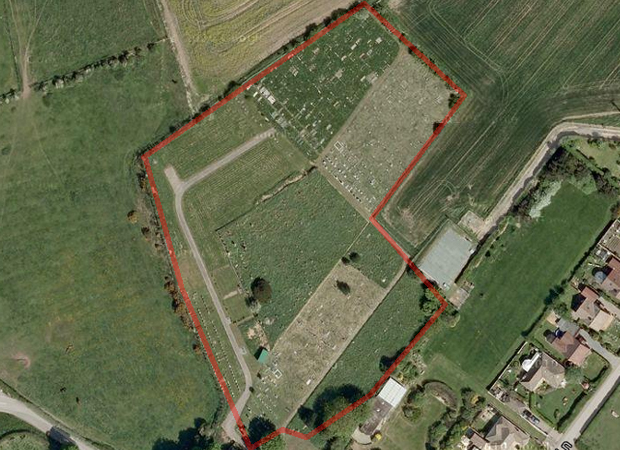 In her FOIA response, Clerk Carole BARKER has provided just two Tender bids for the Grass-Cutting. She has not provided the required evidence of Public Liability Insurance cover for either Tenderer. Did HPC ever receive that evidence? Without it, the contract would be null and void. If it does exist, the Clerk had a legal duty to provide it to me within her FOIA response.

The specification that cuttings must be burnt is both wasteful and environmentally unfriendly – hardly ‘best practice’. In point of fact, the burning of plant material requires a D7 Exemption registered with the Environment Agency. It is difficult to believe that HPC has registered. Certainly, the Clerk has not provided copy evidence of the EA registration.

Moreover, grass clippings may have required transportation from the site and a licence is required to do this. Did the Council ascertain that licencing was in place? No evidence of this has been provided by the Clerk. 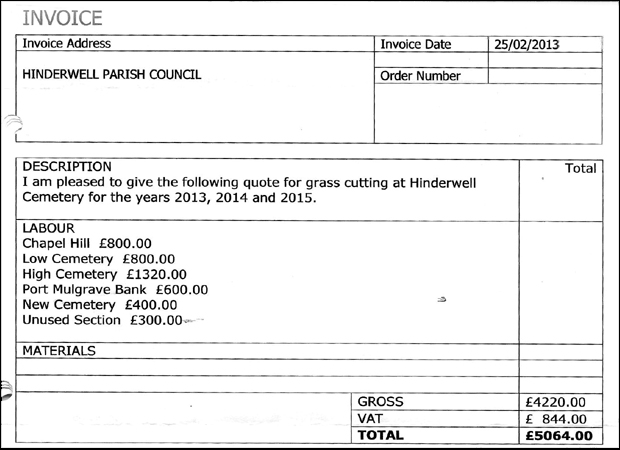 Now let us consider the competition:

Is VAT to be added?

Peter TURNBULL’s 4-bedroom farmhouse is on the market at an asking price of a cool £580,000, strongly suggesting that he is likely to have business interests exceeding the VAT-registration threshold, presently set at £82,000 p.a.). 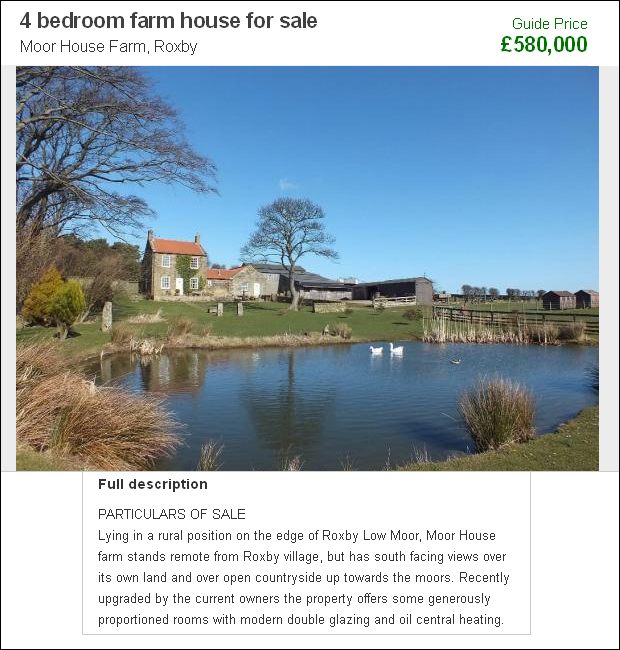 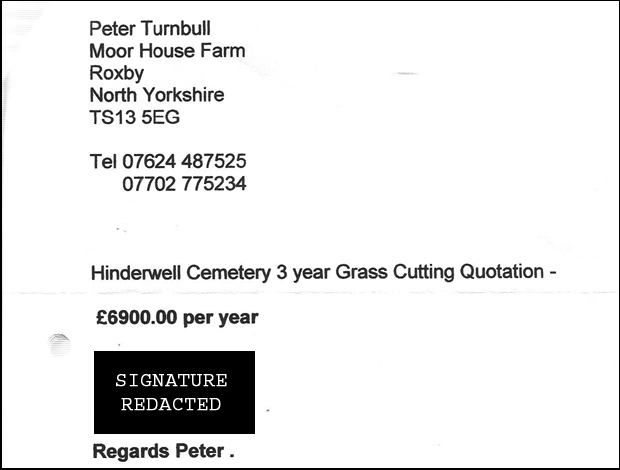 There appears to have been no Tenderer ‘C’, though it is considered best practice to assess a minimum of three Tender bids. What steps did the Council take to advertise the Grass-Cutting Tender? The Clerk has not produced any record of same.

In fact, the documentation provided thus far by the Clerk betrays an extraordinarily slipshod approach to the Council’s finances and procurement procedures. The Clerk is the Responsible Financial Officer.

Even if the Tenderer ‘A’ bid was actually intended for a single year (though that is not what is stated in the bid), this would produce a grand total of only £15,192 including VAT for the three years 2013/14/15 – and a potential saving over the three years of either £19,776 or (at the opposite extreme, and in the event that bid ‘A’ was intended to offer a yearly rate and ‘B’ already included VAT) £5,508 – still a significant saving.

And Tenderer ‘B’ does not appear to hold a licence to transport waste. Has HPC checked?

Nevertheless, HPC determined to award the Grass-Cutting contract to Tenderer ‘B’ – Peter TURNBULL:

The Parish Clerk’s letter of confirmation to Peter TURNBULL bears some hand-written annotations, specifying 10 monthly payments of £690 (April, May, June, July, August, September, October, Novemnber and December a total of only nine), with no payments scheduled for January, February or March. This would appear to clarify the VAT situation. 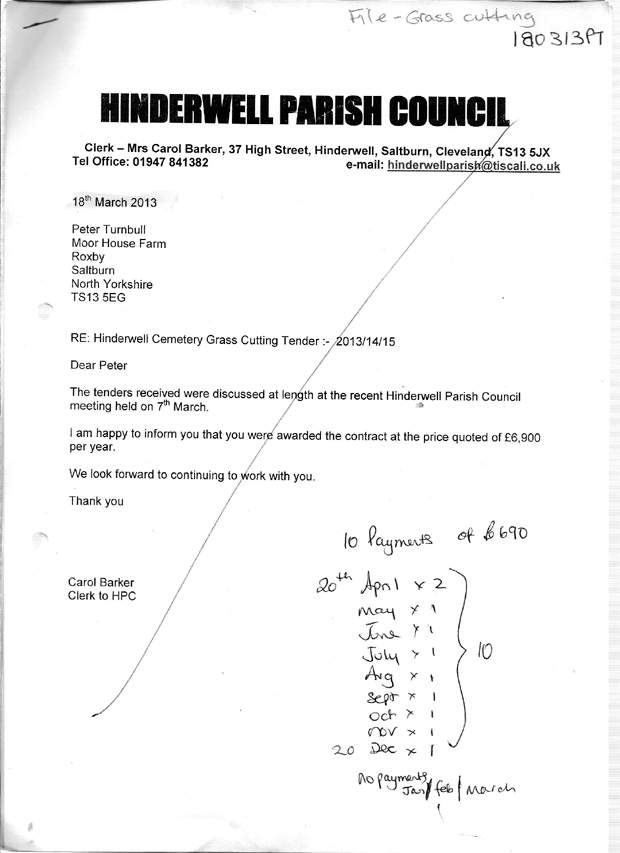 So I was at a loss to envisage any plausible explanation for HPC’s costly decision, until I looked again at the Clerk’s letter awarding the contract to Peter TURNBULL, addressing him by his given name ‘Peter’ – rather chummy, I thought, for the formal confirmation of a contractual obligation between a local government authority and a procured contractor.

It begs the question: is there some special relationship between the parties?

HPC has a web-presence here. I have not been able to locate a copy of HPC’s Financial Regulations, but it is likely that the Council has adopted the Yorkshire Local Council Association (YLCA) template – or some closely similar form of words – along the lines of:

One wonders whether or not the Responsible Financial Officer (the Clerk) and her Councillors realise that they have a joint and several responsibility for “obtaining value for money at all times”? Perhaps they are not aware – judging by their astonishing ignorance regarding the right of members of the public to film/record meetings.

That “best available terms” proviso also seems to have gone by the board, along with the “three or more quotations”, citing only the unquantifiable “Cllrs are happy with the standard of Mr Turnbull’s work” (another breach of Peter TURNBULL’s DPA rights, by the way). There must be some significant undisclosed reason for this inexplicable unanimous decision.

Of course, it would not be necessary to speculate about these transactions if Clerk Carole BARKER had provided – as the law demands – the entirety of the information I requested, including the invoices. But she did not.

I ask again; is there some special relationship between the parties?

And the costliness of the decision is all the more astonishing in the light of remarks made by a predecessor of Carole BARKER, former Parish Clerk Penny FENTON, who stated to the Whitby Gazette (24th August 2011):

Can HPC’s finances sustain any profligate spending? Probably not.

But 2015-style austerity is apparently not biting all that hard at HPC.

That is pure hogwash.

Given that all of the (incomplete) documentation that the Clerk has thus far provided in response to my FOIA request has been in the form of scans (JPEG images), there is, of course, no legitimate or practical impediment to providing the Registers of Interest in the same way.

Could it be, then, that there is something that the Clerk does not want me to see?

In her 12th June 2015 inadequate response to my FOIA, the Clerk stated:

This is disingenuous in the extreme. The Council maintains a web-presence at the following URL:

[NB: There is no legal distinction between a ‘web-site’ and a ‘blog’]

Hinderwell Parish Council does display some Council public-record documentation on this site. However, I am unable to locate members’ Register of Interests. Perhaps the Clerk feels that it is not necessary to comply with the law in this respect? Here it is again:

Overall, HPC seems to have little clue about how to conduct the statutory functions of third-tier local government in an open, transparent and accountable way – and Parish Clerk Carole BARKER appears to me to be dealing from a very slippery deck indeed. Parishioners are entitled to a far higher standard of public service from their Clerk in return for her generous salary of around £14.72 per hour (based on 48 weeks of 36 hours each). And I am entitled to a complete response to my FOIA request. I am also entitled to an appropriate degree of courtesy from the Clerk, and this has been far from forthcoming. (I will address this in detail in a future article).

In summation, a relatively perfunctory examination of HPC has raised more questions than answers – some of them rather disturbing. One cannot help but wonder what else may be buried at Hinderwell . . .

Finally – and for the avoidance of any doubt – the law entitles me to attend any Parish Council in the UK. I may, if I so wish, film/record the proceedings of any Parish Council in the UK. I may also, if I so wish, scrutinise Parish Councils using the Freedom of Information Act 2000 and, having scrutinised, I may form an opinion which, in accordance with Article 10(1) of the Human Rights Act 1998, I may express in the public domain “without interference by public authority and regardless of frontiers”.

There is no place in public life for those who refuse to embrace openness, transparency and accountability.

In simple language, if such persons cannot stand the ‘heat’, then they have the option to get out of the ‘kitchen’.

Their departure will be noted – and the public will not be slow to draw its conclusions.