The main driver for the move appears to be saving the tax payer some money. Newby Wiske Hall is a grade II listed building, a former stately home and is thought to be expensive to maintain when compared to a modern facility. NYP have owned Newby Wiske Hall since 1976 and it came into operational use a year later.

The cost of the new build varies wildly according to sources. The new Police station in Harrogate had a tender cost of £20.8million, with the final bill 10% lower at £18million. The Northern Base is a marginally bigger build, with a similar build cost. The NYPCC is set to disclose a lot more information about the project on the 29th July 2014, the date it is thought that planning permission will be applied for by NYP.

If the new building serves as the new Northern Base for a period of only 25 years, then it appears that Julia Mulligan’s decision to move the NYP HQ to South Kilvington will end up with the gross waste of millions of pounds of tax payer’s money, which at this stage seems fully avoidable.

Hopefully the announcement by the NYPCC on the 29th July will clear up some of the facts about the drivers behind the project, the approximate final cost and ultimately how much money the hard-pressed tax payer will be expected to save over time and when the project is expected to break even.

An FOI request, which despite timely reminders, was answered a couple of weeks late by the North Yorkshire Police & Crime Commisioner’s Office (OPCC), reveals further information about the new HQ.

The land, which the North Yorkshire Police have entered into agreement to buy, is jointly owned by one of Mrs Mulligan’s fellow North Yorkshire Conservatives. It is thought to be owned by Councillor Isobel Sanderson, who is elected to Hambleton District Council.

“At the point of identifying the ownership of the preferred site at South Kilvington, the Estates Team and their consultants were not aware one of the owners was a local councillor. When this fact became known, and prior to negotiations commencing, the local councillor was made aware of the interest and stood down from the Planning Committee.”

“Now knowing who owns the land, the Commissioner can confirm she has never knowingly met the Councillor nor had any interaction with her on any level.”

The chances of buying land from a member of the Conservative Party seem relatively small. The membership of the party was last quoted at 134,000. With the UK population around the 60 million mark, party members make up nearly 0.25% of the population, or a 448-1 shot if you like a flutter on the horses.

With 93% of South Kilvington’s residents apparently against the building of the huge new HQ in their quiet little village, which will be built over the road from a primary school and will overlook some of their homes, it is thought the planning application will be hotly contested.

One neighbouring business that may benefit greatly from the new Northern Base is the Thirsk and Northallerton Golf Club. When the Site Evaluation Matrix of other potential Northern Base sites that were considered is eventually published, I may add a ‘Proximity to Local Golf Course’ column to see which was the closest. At less than five minutes walk from the preferred Northern Base site, it is thought that of any Police HQ in the UK, South Kilvington may actually be located the closest to a golf course, despite North Yorkshire being the largest county in the UK. What are the odds of that? 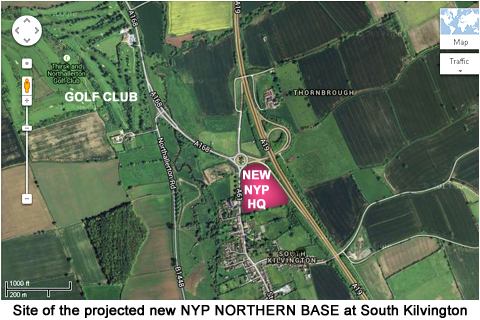