East Riding of Yorkshire Councillor Andy STRANGEWAY [Ind.Ind.] has intervened in the matter of Scarborough Borough Council’s peculiar action to regulate ‘car cruising’ in certain parts of the Borough under a Public Space Protection Order.

Councillor STRANGEWAY has written to SBC Director of Legal & Democratic Services and Monitoring Officer Mrs Lisa DIXON, to point out a fundamental fault in SBC’s paperwork and/or signage: 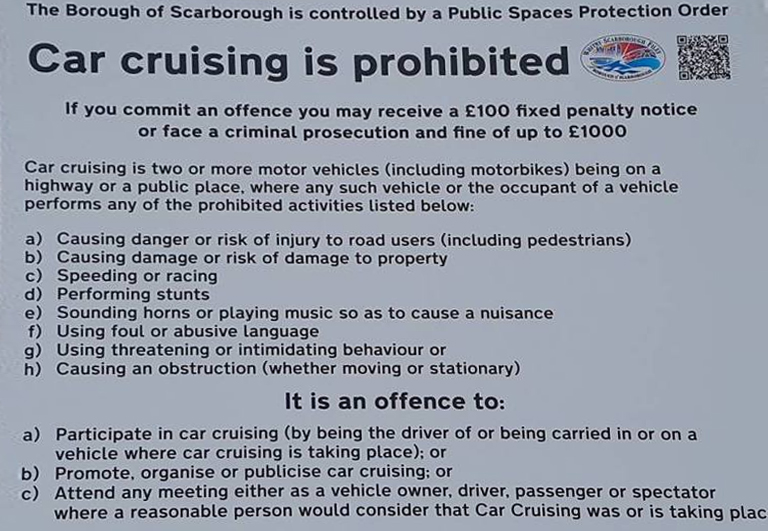 Clearly, many of the above prohibitions are already the subject of primary legislation – prosecutable offences under both traffic and public order laws.

This is problematic because, in some circumstances, the £100 FPN (Fixed Penalty Notice) may offer a cheap option for an offender likely to face a far more severe penalty of up to £1,000 if prosecuted under primary legislation – and at the same time evade any concomitant penalty points on her/his licence.

Pointing out that bye-laws (including PSPOs) should not duplicate primary legislation, Councillor STRANGEWAY states:

“In addition, I believe SBC may have inadvertently created a loophole for a clever lawyer to prevent their client receiving points on their licence by stating they should be dealt with as per the byelaw – not national legislation.”

No doubt we shall presently learn of Mrs DIXON’s rationale for creating a deterrent that deters only one-tenth as effectively as the law as it stood without SBC’s knee-jerk meddling in response to a relatively trifling incident . . .