Today’s Scarborough News reports the outcome of the final hearing (in Hull – not Bradford, as the SN states) in the Ben MARRIOTT constructive dismissal claim. Mr MARRIOTT is reported as estimating that by the time the legal costs are added to his 6-figure settlement sum, the Council’s “whitewash” of his whistleblower allegations will have cost the Council (i.e. the public) in the region of a quarter of a million pounds – though this figure does not include settlements made by the Council to other former employees believed to have been implicated in the alleged systematic corruption. Unlike Mr MARRIOTT, these former employees are understood to have signed non-disclosure agreements, though the Council has not admitted as much.

SBC Leader Councillor Derek BASTIMAN [Con.] is quoted by the SN as stating that, in the interests of openness (don’t laugh), the Council had not insisted on a non-disclosure agreement with Mr MARRIOTT, though this is at odds with Mr MARRIOTT’s statement to the NYE, in the court house, that he had rejected any kind of gagging order out of hand.

Full background to the Ben MARRIOTT case can be found here and here.

The SN headline also makes reference to the on-line petition launched by a Scarborough resident in support of a vote of NO CONFIDENCE in the present Conservative Council Cabinet to manage and maintain services whilst ensuring constitutional and legal processes and procedures are observed and upheld, for and on behalf of the people of the Borough of Scarborough, North Yorkshire, UK. 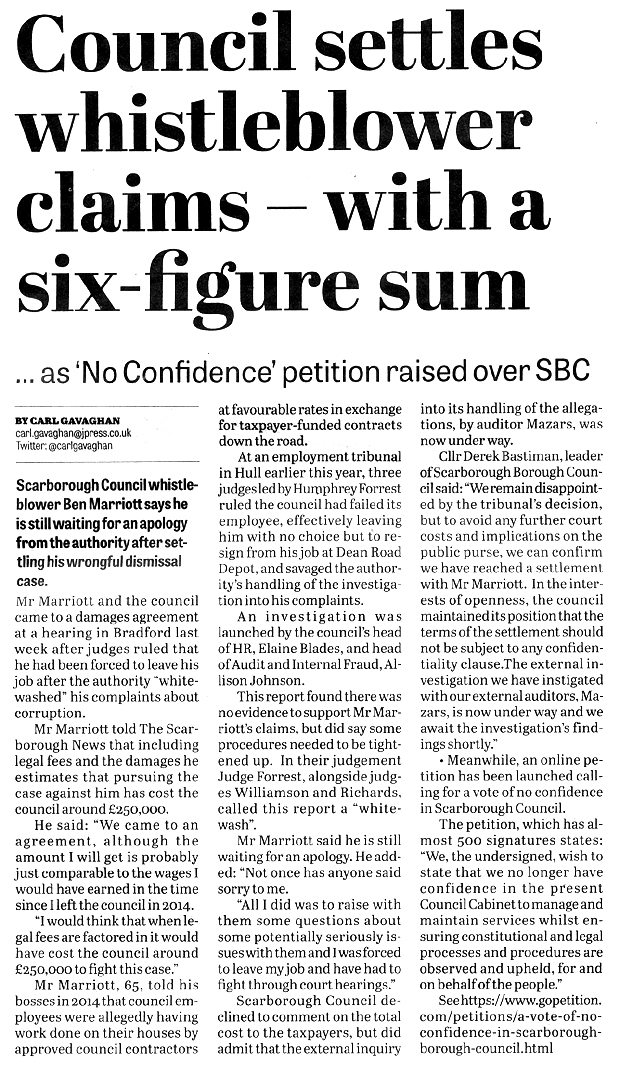 If the petition – which can be found here – achieves nothing more than drawing public attention to the issues published on the North Yorks Enquirer, it will be no wasted exercise.