On 6th May 2021, elections will be held to determine who will be the next Police Fire & Crime Commissioner (PFCC) for North Yorkshire.

The Candidate’s comments are in italics.

“I have the discipline of serving in the armed forces and have a law degree specialising in human rights and criminal law.

The budget for North Yorkshire police is £180 million; last year we obtained an extra £8.4 million from central government. The PFCC is responsible for getting value for money and for ensuring there is financial scrutiny to obtain value for money. I have run a business specialising in business compliance, data processing and GDPR. I am routinely used to scrutinising figures.

I served as a Harrogate District Councillor for many years, where I chaired a number of committees and was Mayor of Knaresborough. I also serve on the Board of a plc. This has given me extensive experience of high level scrutiny of large organisations, which is a key element of the role of PFCC.

Because I have a law degree, I understand the legal side of the role. Working at a senior level I will scrutinise financial matters and have the acumen to obtain value for money from joint operation of the Police and Fire Service, and to ensure the public have access to them.

I have a history of being on the right side of victims through my council and community work, so I see the PFCC role as an extension of this.

“I was brought up in Knaresborough and I learnt the very basics of policing whilst serving with 217 Squadron of the Royal Corps of Transport in the Territorial Army. Whilst some of my contemporaries went on to join the police, I studied law in Leeds, graduating as a mature student with a 2.1, and subsequently established a successful business in North Yorkshire.

As a past victim of crime I know first-hand the stress this causes and I will always be on the side of the victim. The victim can be a member of the public or even a police officer.

I have had mixed experience of with the police response to anti-social behaviour and if the police do not handle some cases well, we need to identify how they can do better and what resources they need to improve.”

“I think we should start with looking at what has gone well.

Rape investigations are performed well; the evidence is collected using the latest forensic techniques. Victims can use the refuge at York and if they decide to prosecute the evidence is there. The rape conviction rate is better in North Yorkshire than for many other forces, but I would still like to see it improve far further.

With regards to the Fire Service, the trialling of multi-service officers in Craven who are first responders and PCSOs has worked well. However, conversely the recruitment of on call firefighters is struggling in certain more rural places. This is because traditionally people who were working locally would become retained firefighters, but now they tend to travel more widely and are not always available. I will be looking to extend the use of multiservice officers to improve on call recruiting.

The accountability of the police is clearer under the PFCC than it was under the old Police Authority. However, we need to rely on the media to communicate the message to the public. I want to use the media to get the message out, communicate widely and engage. I also want the public to be able to access services online. WhatsApp and chat lines are relatively new and I think we do not make enough use of them yet. Calls to 101 need to be consistently answered within less than 40 seconds.”

4.1. The refusal of North Yorkshire Police to investigate the murder of a woman in 1979 thought to be from Scarborough and the response of PFCC Mulligan to this: http://nyenquirer.uk/toms-matter-1/

4.2. The Chief Constable’s policy of not prosecuting police officers for breaches of the Coronavirus Lockdown Regulations and being asleep on duty, and the response of PFCC Mulligan to this: http://nyenquirer.uk/sleeping-beauties/ 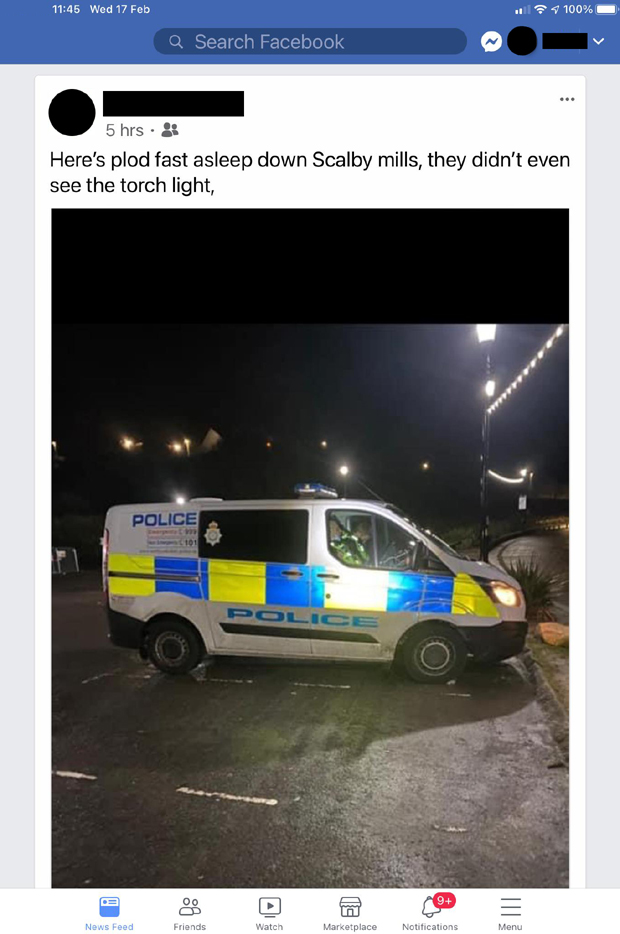 “With reference to the items you have highlighted, whilst I am concerned, it is not something I am prepared to make a public statement about until I am acquainted with further information from North Yorkshire Police and that will be post-election if I am elected.

However, that said you should find me far more media friendly.”

The Police, Fire & Crime Commissioner (PFCC) election will take place in North Yorkshire on Thursday the 6th May 2021. The Conservative Candidate is Philip Allott who is campaigning for total police transparency and believes that the role of the new PFCC must be totally independent from the police and therefore should not be held by any former serving officer.

Philip is North Yorkshire born and bred and was educated at King James’ School Knaresborough, and later studied law in Leeds, graduating as an LLB. Hons. He is the managing director of Allott and Associates Ltd a specialist PR and B2B marketing agency, which he founded in 1993 and which now operates internationally. Philip is also a qualified GDPR practitioner and a non-executive director of HMCA PLC.

He is married to Sandra and they have a grown-up son and daughter plus grandson. Philip is the author of ‘The Donkeyman’ which is a time capsule on a bygone North Yorkshire era and also Integrated Business to Business Marketing, which will be published by John Hunt Publishing, this summer.

After serving in the TA Philip began his political career in Knaresborough where at the age of just 25 he was elected the Country’s youngest Mayor. Philip’s political experience includes nine years as a senior Harrogate District Councillor, where he chaired a number of committees and subsequently became leader of the Conservative Group. He stood for Parliament in 2015 for Halifax and got within 428 votes of winning.

Philip supports the Turn Trust which helps homeless people and also serves on a regional Trust and a number of Yorkshire committees.”

Philip Allott the Conservative Party’s Police, Fire and Crime Commissioner candidate wants changes in how the Police handle anti-social behaviour, which periodically flares up in the more urban parts of North Yorkshire especially in York, Scarborough, Harrogate and Ripon.

This will also include working alongside other partners such as local councils, community partnerships and neighbourhood watch schemes, to target the culprits and reduce the amount of anti-social behaviour happening.

Other possible initiatives could include an extension of Operation Erase. This currently involves a joint procedure with the British Transport Police to reduce alcohol-related anti-social behaviour on trains, but this could be extended to public spaces. 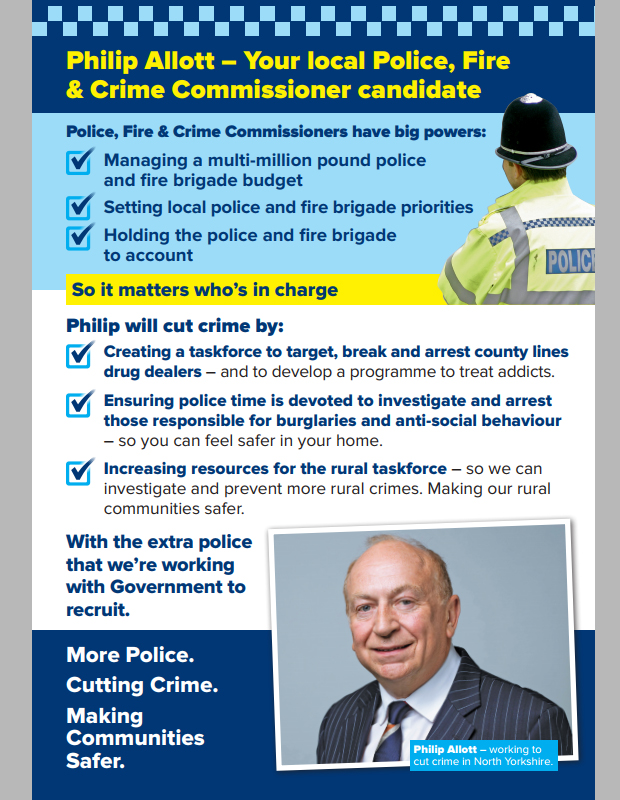 You will shortly be able to vote in on May 6 in the forthcoming election for the North Yorkshire and York Police, Fire & Crime Commissioner. My name is Philip Allott and I am the Conservative candidate in this election and I hope that you will vote for me.

We are very fortunate to live in such a wonderful area – with the lowest crime rate in England. However, there is no room for complacency because we have problems with rural and cross-border crime, county lines drug dealers exploiting vulnerable young people and burglary rates that are high in certain areas. If elected I will be working hard to tackle these along with other crime and fire issues.

To make our area even safer:

I will continue recruiting more police officers to increase the size of North Yorkshire Police, increase police visibility and help tackle more crime. I will also recruit more multi-service officers to support the fire service, NHS and police in the more rural areas.

Drug dealers have no place in North Yorkshire, and I will work with other police forces and partnerships to capture those responsible for drug dealing and lock them up. I will make tackling county lines drug dealers my top priority. These blight our communities and exploit vulnerable young people. This will be done by undertaking a more collaborative approach by working with neighbouring forces and other agencies such as social services.

All citizens, especially women, have the right to feel protected. I will seek to integrate the CCTV cameras throughout North Yorkshire, allow real time CCTV police access, and increase night time police patrols.

I will support and increase the resources available to the rural taskforce which has been created to help investigate and tackle rural crimes across North Yorkshire.

Dog theft should be a specific criminal offence with harsher penalties for offenders. There should also be one standard database accessible to vets and law enforcement agencies.

I will work hard to cut anti-social behaviour in North Yorkshire and York.

I have identified a plan for each area of North Yorkshire

Scarborough including Whitby and Filey

1 – Development of an increased partnership approach to preventing burglaries and anti-social behaviour including more police time devoted to arresting the minority of individuals responsible for these crimes.

4 – Greater partnership working with the vulnerable and those with mental health issues to address their needs.

5 – Increased police resources for the rural taskforce which has been created to specifically investigate and manage rural crime.

6 – Greater use of technology especially for the public to contact the police like live chat, online reporting and accessing certain administrative services like licences, to free more resources for frontline services devoted to catching criminals.

I will continue to fight for residents in North Yorkshire and York as your local Police, Fire and Crime Commissioner if I am given that fantastic opportunity. To do this I need your support and I hope sincerely that you will consider casting your vote for me.