The North Yorkshire Police has issued advice to the public in relation to possible acts of international terrorism, reproduced below:

The UK threat level from International Terrorism is now ‘critical’ which means an attack is expected imminently.

The change in threat level is based on intelligence that is considered credible and specific.

Please watch this short film Stay Safe: Firearms and Weapons Attack which explains what to do if you are caught up in a firearms or weapons attack. The film is also accompanied by an online information leaflet.

The film and leaflet advise that if you are caught up in an incident to ‘run, hide and tell’ – guidance which can be applied to many places and situations. 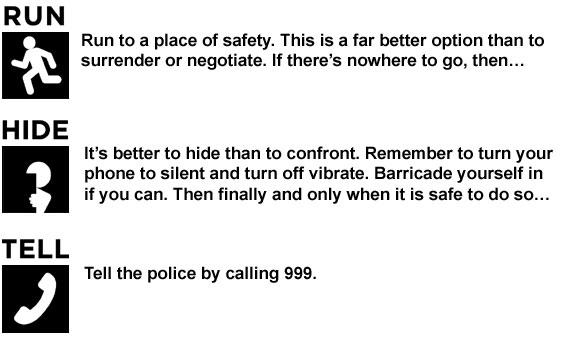 The film and leaflet are set out below

Link to leaflet in Welsh here.

We urge you to remain vigilant and to report any suspicious activity to the police by calling the confidential anti-Terrorist Hotline on 0800 789321 or in an emergency by dialling 999.