This included Jimmy Corrigan and Peter Jaconelli, who were the lead abusers in a paedophile and satanist ring that operated in Scarbrough and Whitby for many years and was probably known to North Yorkshire Police.

I also commented on Savile’s close connection with the notorious paedophile Cyril Smith MP, who was the lead abuser in a paedophile and satanist ring in Rochdale.

We are currently working on another article for publication later this week, which details how members of the Scarbrough and Whitby ring was also active in Leeds. 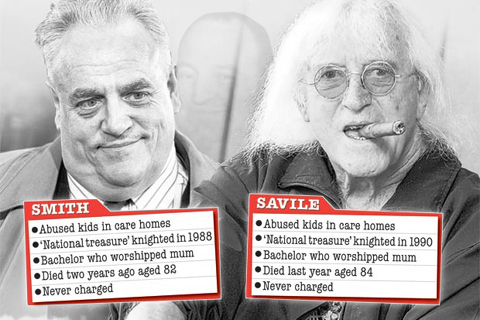 Cyril Smith was probably Savile’s oldest friend and he appeared on Savile’s TV Show.  He was also a paedophile who should have been prosecuted, but escaped justice.

The sixth friend is  Mr Ray Terrett.  A close friend of Savile’s who was a disc jockey with him for Radio Luxembourg and shared a flat with him at Great Clowes Street, Salford in the 1960s. He also used to act as Savile’s driver and such was the close nature of their relationship that he called Savile “Dad”.  Savile called him “son”.

He is currently on Police bail in connection with an allegation of rape, although Greater Manchester Police confirm that this is unconnected to the Jimmy Savile abuse case.

Jimmy Savile has been accused of sexual assault near his flat at Bury New Road, Salford, Manchester in 1966.