In 2012, Councillor Evans was telephoned at his home as an elected member of Eastfield Parish Council. The caller was unhappy with the rise in the local precept and allegedly went on to make personal remarks about Councillor Evans. Councillor Evans apparently let the insults get the better of him and responded in a similar fashion.

“The Standards Committee are concerned at the conduct shown by Councillor Evans to an Officer of this Council and requests that Councillor Evans provides a written apology to the Investigating Officer.”

It should be noted that former Councillor Evans had requested that the name of former Conservative Mayor of Scarborough, Peter Jaconelli, be removed from the list of Honorary Aldermen of the Borough due to multiple allegations of child sex abuse.

Due to the changes in the way that Standards Complaints are dealt with by Councils, publicly castigating elected members for their conduct is the only effective route left open to curtail their behaviour. It also gives the public a chance to see what really went on.

Let us take a look at a couple of other Standards Complaints and how SBC have dealt with them in the recent past. 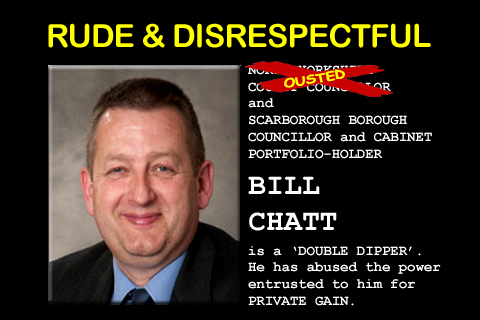 The Standards Committee resolved that Councillor Chatt should undergo training to help him deal with members of the public.

At no point was Councillor Chatt ordered by the Standards Committee to apologise to the member of the public he insulted over email. 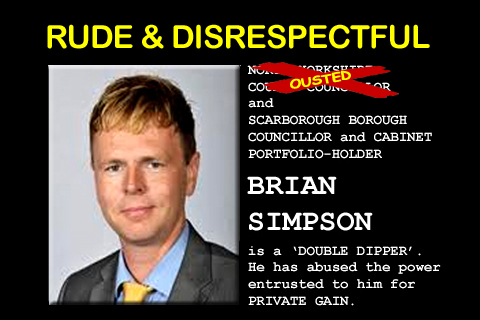 Like Councillor Evans before him, Councillor Simpson was also under pressure from a resident of Eastfield regarding the 111% increase in the precept and also the fact Councillor Simpson had been receiving a Broadband allowance from both North Yorkshire County and Scarborough Borough Councils. This was done in full public glare on the Scarborough News website.

Councillor Simpson queried whether the Eastfield resident was married, when the reply came back ‘No’, Simpson responded with ‘No wonder you are a Miss’. Meow. Very respectful.

A Standards Complaint followed and the determination of the Standards Committee was that they didn’t believe that Councillor Brian Simpson was referring to Councillor Carole Gerada as the ‘Dell Troll’.  Nor did they believe that cattily querying the marital status of the Eastfield resident concerned had broken the code, therefore Councillor Simpson had not failed to treat people with respect. A whitewash, perhaps. 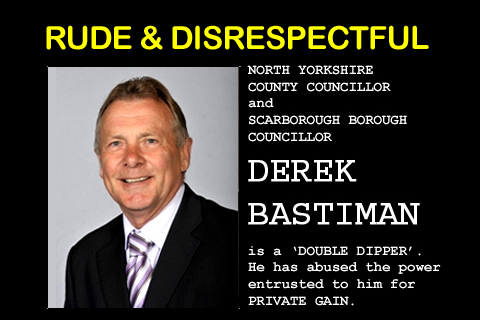 There is an impending complaint regarding the conduct of Councillor Derek Bastiman. The now North Yorkshire County Councillor, Scarborough Borough Council Cabinet Member and Newby & Scalby Parish Councillor, as someone standing in an election, attended the count for the May 2013 County Council Elections at Scarborough Spa.

During the count, several members of the public heard Councillor Bastiman say “You can f*ck off for a start”, directed at a candidate for the Streonshalh ward by-election in Whitby. I’m sure most people would agree that this was conduct most unbecoming to an elected member. Councillor Bastiman is also the leader of the Scarborough & Whitby Conservative Party. One wonders if the party will retain Councillor Bastiman’s services in the present capacity after such an outburst.

It will be most interesting to see how the Standards Committee responds to a complaint about Councillor Bastiman. If the Standards Committee want to be seen to be a body that is fair in their decisions and widely respected, then surely Councillor Bastiman will be required to undertake training and be forced to apologise for his unpleasant behaviour.

If the Standards Committee doesn’t require Councillor Bastiman to undertake training and apologise, then we can only conclude they are a body unfit for purpose and the real reason for Councillor Evans’ treatment was politically motivated. That may also bring into question the political impartiality of the Borough Council and their role in the matter.