I have no use for party politics in local government. I have stated this many times. It is divisive. And it is fundamentally dishonest, insofar as candidates often give their allegiances not to the party whose politics most closely reflect their own convictions, but to the party most likely to achieve their election in their given wards. The red and the blue rosettes by no means signify the socialist and the capitalist. In many cases, they are flags of convenience. Witness the number of Councillors who have ‘walked the floor’ in the last ten years.

That said, I have, over the years, been sharply critical of former SBC administrations – both Councillor FOX’s and Councillor BASTIMAN’s Conservatives administrations. They were ‘in power’ and were justly called to account by myself and others for their many failures – the SAVILE/JACONELLI cover-up; the lies to the BBC; the Ben MARRIOTT corruption allegations; the demolition of the Futurist; the misguided involvement in the Yorkshire Coast BID fiasco. Readers will recall these, and more, far better than I do.

The crux of the problem lies in the Strong Leader’s right to form a Cabinet of her/his own choosing. The difficulty arises in identifying Councillors from within the Leader’s own party (the Opposition generally is allowed to nominate a Mayor of its own choosing and the Chairship of Overview & Scrutiny) who are capable of the task in hand. This results in appointments based on friendship, loyalty, the settling of a political debt and/or “we have no-one better” place-fillers. Inevitably, the past Conservative administration had some jokers in the pack (and wild cards). We all recall foolish gaffes from the likes of Andrew JENKINSON, Joe PLANT, John NOCK et al.

The present Cabinet – Councillor SIDDONS’ second attempt at fielding a ‘team’ – is by no means without its liabilities. His first attempt – ‘Cabinet-Lite’, or the so-called ‘Skeleton Cabinet’ – was simply unable get up to speed. Not least of all, the Leader, who has been conspicuous by his many absences, voluntary or otherwise. By his own admission, he is not yet fit for service (after a nine week lay-off) and may not be for some considerable time. (Interestingly, he has abandoned referring to Councillor COLLING as his ‘deputy’ – she is now his ‘spokesperson on COVID’.

I thought I would try and bring you up to date on a few things.

Firstly, it is now just over two months since my stay in hospital.  I am taking my recovery slowly, as advised by my consultant, and steadily increasing my stamina, I am glad to say.

About three weeks ago, I started to take tentative steps towards a phased return to work. Firstly by getting briefings from Mike on progress with the fight against COVID19 and then joining the informal video conferences with Cabinet colleagues. My work schedule prior to my illness was, to say the least, intense and it will be some while before I am able to return to anything like that level.

I have taken part in a couple of interviews including a video message to staff which I really wanted to do to show my appreciation for all the work they are doing in this crisis.

I can tell you that Liz and the rest of Cabinet are covering all the issues that arise during the day to day operation of the Council and Mike Greene is keeping you updated through his weekly briefing note.

I am very keen to embrace all that technology can offer us in terms of all Councillors being kept in the loop and briefed on all issues, particularly those where physical attendance by Members would be usual.  To that end, we are testing a system for Cabinet on 12th May.  I know our IT support staff are doing a brilliant job in keeping all of our systems running and adapting them to meet the needs of remote workers.  This will be a further test of their skill and ingenuity if we can have something approaching a normal participatory meeting.

Whilst COVID19 is currently taking up much of the capacity of staff and members, now is the time to be thinking of our recovery from this crippling pandemic. The Borough has, in all likelihood, lost most, if not all, the current summer season and the impact that will have on the local economy cannot be underestimated, but we must turn our thoughts to the future. To that end, I have asked the Chief Executive to set up a team using all our collective skills and abilities in conjunction with business leaders from across all sectors in the Borough.  We need to talk through and plan what might be possible, how the Council can assist and enable and come up with a tentative plan for our recovery, given the national and international context.  I will keep you updated on this.

Finally, I want to thank all my colleagues for their good wishes and support; I know that this is a very testing and worrying time for all of us and I acknowledge the effort and support many amongst you  are putting  into assisting your communities as we get through this traumatic period in all of our lives

Those so-called “informal video conferences with Cabinet colleagues”, by the way, are held ‘behind closed doors’ with no access for press or public. In my interpretation, that is outside of the spirit and the letter of the law. But what the hell? Mr Transparency plays by his own code of secrecy.

And, as a matter of fact, the Council’s IT-team is not doing a brilliant job. Web-site functions have been slow or non-functional and the matter of organising webcast-able virtual meetings has thus far proved beyond them – fifteen of them, it must be said, who collectively burden the taxpayer to the tune of around one million pounds per annum, all considered.

Be that as it may, the Leader, perhaps nettled by Stormin’ Norman MURPHY’s opprobrious (but accurate) ‘Annual Report’ series, seems to be back – in spirit if not in the flesh – with an empty basket woven from the vaguest rhetoric. We need not consult a doctor of linguistics to note that Councillor SIDDONS’ offering is largely about himself (around twenty first-person pronouns in that short message).

In response, former Leader, Councillor Derek BASTIMAN, has been reported in the local paper as stating that the Council should be looking to the skills of members in this unprecedentedly difficult period:

“The borough council is the ideal organisation to take forward the initiative and with this in mind I have suggested to my fellow group leaders that a coalition administration should be set up, bringing together all political affiliations, and those with none, to enable the borough to be prepared to take on board opportunities which may be presented to us.

“Across the council membership we have many varied skills and bringing them together I believe we can bring about the early revival of this area’s economy.

“Such a coalition council should work with the many entrepreneurs, business leaders, and organisations in the council’s area to pool ideas and innovative projects to ensure that our workforce can return to employment, our tourist industry can once again boom, the many rural enterprises and businesses find new markets and our residents enjoy the health and wellbeing of which they are rightly proud and deserve.”

Of course, talk is cheap. Nevertheless, a genuine ‘Rainbow Cabinet’ would be sure to include the very best and most experienced Councillors who, whilst not exactly The Brains Trust, would at least have achieved appointment strictly on merit. At least they would be, quite literally, the best of a bad lot.

I have always maintained that I want the best Council I can get. For my money, a ‘Rainbow Cabinet’ would serve us all far better than the present uneasy alliance between Labour and the Independent Group, some of whom are grumbling that, having kept SIDDONS ‘in power’, they have been thrown very little in the way of crumbs. As for the so-called Leader – would some kind soul please fetch him his coat?

When members of any political Group refer to their Leader as a “part-timer”, a “playboy”, a “paranoiac” and “power-hungry”, the time has come to scrap party allegiances and set on the best available eight-strong Cabinet RIGHT NOW – the most experienced, the most savvy, the most knowledgeable, the most able, the most creative and, above all, the most committed. Irrespective of party affiliations.

Examining past performances in key positions – and attendance records – will be a good guide. 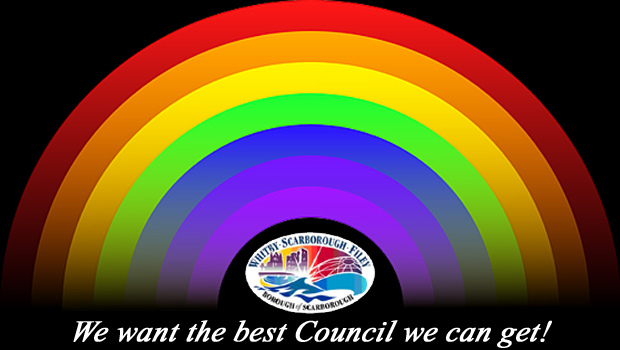