–    a summary of the highlights of the past year, in the Public Interest, of course.
–    the Corruption Busters 2012 Awards for extraordinary corruption in North Yorkshire.

Well readers, 2012 was a great year for the Corruption Busters.  We pursued the following investigations:

·    Jane Kenyon’s mishandling of the Whitby Regatta Committee and Whitby Regatta Limited shambles, resulting in both organisations operating in parallel and the Regatta being a commercial venture – not a Registered Charity.

·    Double-dipping by fifteen Scarborough and North Yorkshire Councillors, including breaking it in the national press.

·    Live cross-examination of Councillor Tom Fox on BBC Radio York by Tim Thorne, in which Fox was caught out lying about his expenses.

·    Revealed that Councillor Thomas William ‘Bill Miller” and County Councillor Jane Kenyon were officers of a bankrupt company which they had not declared in their Register of Interests.

·    Tracked down Jimmy Savile’s activities in Scarborough and Whitby, and the cover-up by North Yorkshire Police into the same, as well as identifying premises in Whitby equipped with an instrument of torture.

·    Nigel continues chasing the whereabouts of valuable paintings, supposedly in the possession of SBC, but now listed as ‘missing’.

·    Challenged the North Yorkshire Police Authority Accounts and revealed that Chair Jane Kenyon had been double-dipping by having a mobile phone she was not entitled to and had it paid for by the Police Authority instead of paying for it from the allowance provided to her for that purpose.

·    Continuing investigation of the “Me Too!” Voucher Scheme of forgeries and frauds

Clearly all very irritating and embarrassing for those concerned above and, unsurprisingly, we have had a mixed reception

In Scarborough and Whitby, the local press do not do investigative-journalism, the Monitoring Officers ignore complaints, as do the Police, and so it must have come as a great shock for Councillors to suddenly be under intense scrutiny by the Corruption Busters investigative-journalists, leading to national press criticism (including three Private Eye pieces in the last six months) and a great deal of interest from other political journalists.

Consequently, there has been a predictable kickback from people who resent being held accountable for their actions by the public for the first time.

·    County Councillor Jane Kenyon ordered the exclusion  by the Police of one of our correspondents from a public Police Authority meeting for asking questions that were inconvenient and embarrassing to her.

·    Double-dipping Councillor and Party switcher extraordinaire County Councillor Brian Simpson described the criticism of Councillors in the press as an “onslaught” – ignoring the fact that it reflects public opinion and legitimate criticism from a free press in a democratic society, rightly concerned about the correct application of the law and of Council policy, and that Leicestershire County Council has taken exactly the same line as us over the David Parson’s scandal.  Councillor Simpson’s comments were then used as an excuse to illegally ignore all further complaints, thereby placing himself and his fellow double dippers above public scrutiny or any form of public accountability – the only Councillors in the UK to adopt this lofty position.

·    County Councillor Jane Kenyon abused her position as Chair of the North Yorkshire Police Authority to make a harassment complaint about Tim Hicks to the Police falsely, alleging harassment.  Normally a harassment complaint would be dealt with by a Uniformed Constable; this one was dealt with by Senior Detective Ventura [pseudonym].  Result:  Tim was interviewed under caution by two highly experienced detectives at Fulford Road Police Station, York, at Jane Kenyon’s request, regarding Real Whitby articles, but Police could produce no evidence of any offence and Tim was released without charge.

·    Senior Detective Ventura also wrote to Tim Hicks, on North Yorkshire Police headed paper in her official capacity as a Police Officer, threatening him with civil action on behalf of unnamed third parties, alleging that his articles were ‘misleading’ and asking him to remove them, ignoring the fact that civil matters are not the concern of any Police Officer and Detective Ventura’s letter was therefore an abuse of authority. This was one of a series of empty threats of legal action for libel that we have received during the year. Tim declined to remove the articles from Real Whitby and, as usual, has heard nothing more from anyone; presumably because the complainants know that telling the truth is not libel.

We have variously been referred to as “cyber terrorists” and “internet trolls”, and falsely accused of criminal offences for exposing misconduct, in the public interest.

In response to all of the above we would quote the words of the Rt.Hon. Eric Pickles, Communities Minister, on freedom of the press:

“I think it is really massively important to ensure that we have freedom of press in this country. Something that characterises the British press is that it is good at exposing corruption and it is good at going to places where other press wouldn’t and I think it was Thomas Jefferson who said that for a free society to operate then the river of a free press had to flow without restriction. So I think that given that I think the press are looking towards finding ways, the end result of offering a good way in which people have got a legitimate complaint can find a resource, then that’s right.”

On the other hand, more positively, we have; covered a number of corruption stories in North Yorkshire; been in the national press three times, including attracting one of the two Private Eye 2012 Corruption Awards, for the double-dipping story – which we perceive to be in recognition of the quality of our investigative-journalism; and we have developed close liaison with a number of national and local papers.

Best of all, we have also been stopped in the street frequently and congratulated on our work, which is very gratifying.

Our articles are read beyond Whitby and Scarborough by Councils throughout England and Wales, as well as many local and national newspapers. Interestingly, we are also getting a number of Government, Educational and Police Forces in England and Wales routinely monitoring the site –particularly since our Jimmy Savile investigation evidence was referred to Operation Yewtree. One user at Newby Wiske (NYP Force Headquarters) is apparently logged on more or less permanently (thought to be the NYP Force Intelligence Bureau).

·    And we have forced SBC to change the way that Councillors’ Broadband is reimbursed, thereby preventing some Councillors from siphoning off thousands of pounds from their Councils over the next four-year term; arguably our best achievement of the year.

That brings me to the moment you have all been waiting for: 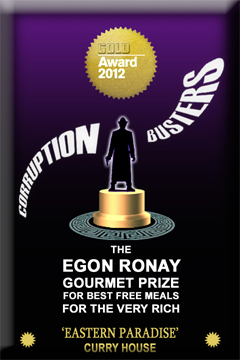 Video of the pornography found on Robert Goodwill’s PC and seen by his children has not been requested; on the basis that we probably could not show it 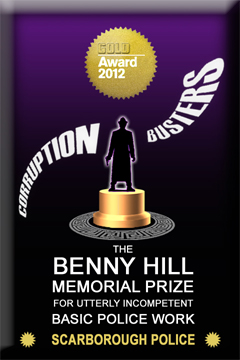 The Inspector Clouseau Memorial Prize for Failed Intimidation of the Press

GOLD : – Ex-Chair of the North Yorkshire Police Authority County Councillor Jane Kenyon, for abusing her position as Chair of the Police Authority by trying to have Tim Hicks framed for harassment and arrested by her favourite pet detective, apparently because she had appeared in Private Eye and Tim was investigating her expenses. Senior Detective Ventura [pseudonym] can be seen in action here. 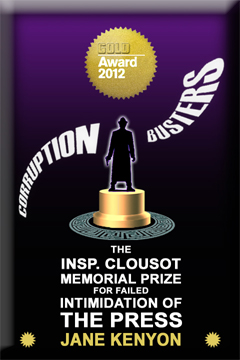 GOLD : – County Councillor Jane Kenyon (again), for double-dipping; not declaring her interests; appearing twice in Private Eye in half a year for separate acts of misconduct (thought to be a record); not declaring that she is the CFO of a bankrupt company; trying to have Tim Hicks arrested and mismanaging the Whitby Regatta Committee by turning it into a duplicated commercial company. 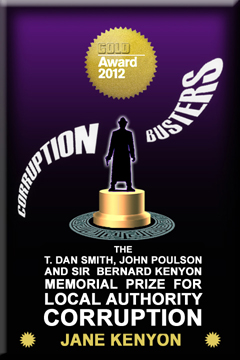 SILVER : – Highly Commended:  NYCC Monitoring Officer Carole Dunn, for ignoring legitimate complaints against Councillors and pre-determining that they are entitled to be paid twice for their Broadband connections, -thereby obtaining a very well deserved mention in Private Eye for herself and the fifteen Councillors concerned- when in fact they obviously are not.  Please see here video of the standards committee investigation into double dipping: , here. 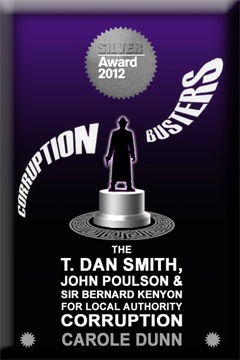 BRONZE : – Jointly:  Councillor David Parsons, the former Leader of Leicestershire County Council now sacked, disbarred from the Conservative Party, forced to repay the money and under investigation by the Police for double-dipping shares the Award with the 15 double-dipping Councillors from Scarborough Borough Council and North Yorkshire County Council, who have so far escaped the same fate due to the machinations of the Monitoring Officers. 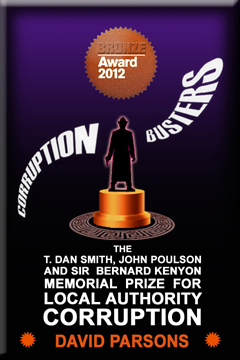 GOLD : – Councillor Joe Plant for his ‘full and frank statement’ to the newspapers justifying double dipping by himself and his fellow Councillors, which we are all still awaiting apparently because neither he nor the monitoring officers can think of any credible defence for publication. 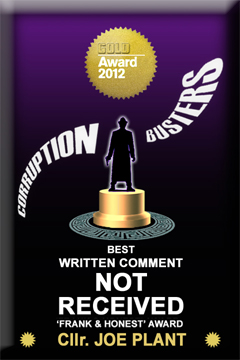 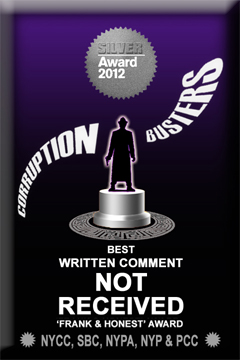 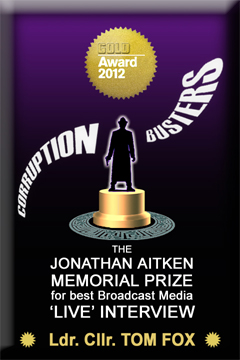 Looking forward to 2013, Corruption Busters will be adopting a more focussed approach and will be continuing our exposure of the 15 double-dipping Councillors, which we expect to be an election issue at the County Council Elections in May 2013.

Nigel will be working on OPERATION EASTERN PARADISE an examination of the Chief Officers expenses and those of other Council employees, and Tim Thorne on further expenses investigations, locally and in Westminster. Tim Hicks will be monitoring the Monitoring Officers and following up on the Jimmy Savile cover-up.

Also coming in the New Year: even more serious allegations have emerged about the double-dippers and we will continue to press them to re-pay the estimated £15,000–£20,000 that they have received improperly, at a time when the Council is cutting back on services.

We hope you enjoyed the videos and wish our readers a happy and prosperous 2013.

Thanks for all your support and have a great New Year.