All Wind and Pith!

Back in the day, when we all (?) dutifully believed that the full fury of ‘global warming’ and ‘climate change’ was upon us, a golden glow arose over the deeply furrowed brows of our Scarborough Borough Councillors and Officers, and, lo, it’s name was “The Dogger Bank Wind-farm”.

Even with the benefit of hindsight, it is difficult to decide whether SBC Leader Councillor Tom FOX and his (then) close ally Councillor Andy BACKHOUSE genuinely embraced that supremely pithy sound-byte “the wind-farm will do for Whitby what oil and gas did for Aberdeen”, or whether they simply chose to ride on a wave of wishful thinking because that is the only sort of thinking they can manage.

As our colleague Richard INESON has so ably pointed out, SBC’s influence is rapidly shrinking. Many of its former functions have been factored out, shuffled sideways, privatised or otherwise abandoned.

So the prospect of the Dogger Bank development (and that other ‘manna from heaven’ proposal, Sirius/YPL’s plans for mining potash from beneath the North Yorkshire Moors National Park – a subject I will be revisiting soon) offered an irresistible temptation to SBC to make like they had something genuinely worthwhile to offer.

Equally predictably, it has dried up.

But first let us remind ourselves, courtesy of the Whitby Gazette, of what a bonanza the Dogger Bank project, as presented by SBC, was going to bestow upon Whitby . . .

In an email to myself and others, dated 18th March 2010, SBC’s (then) Head of Technical Services John RIBY told us:

“You should be aware that the SEN focuses on Scarborough and it is they who have put the slant on Scarborough. Undoubtably[sic] Whitby has the greatest potential”.

I am labouring the point here, but you get it already; according to SBC, the Dogger Bank windfarm was going to be the very best thing since John POULSON. Or do I mean HighPoint Rendel?

Fortunately, this barrage of forced optimism did not go unchallenged. WTC Councillor Ian HAVELOCK and WTC Councillor Ken GRAHAM were amongst the first to voice skepticism – bordering on incredulity. They were by no means unsupported . . .

RenewableUK is the info-portal of the British Wind Energy Association. For over two years now, I have been pointing out to anyone who wanted to listen – plus Whitby Town (Parish) Council – that, in the hundreds of press-releases I have received from RenewableUK, the names ‘Whitby’ and ‘Scarborough’ have never once appeared. The name ‘Teesside’ has appeared frequently. It was very clear which way the wind was blowing; to the north.

But SBC was pushing ahead intrepidly:

The astonishing thing is that everybody who knows Whitby Harbour is fully aware of its idiosyncracies – a very tough entry in rough weather, even with plenty of water under the keel at high tide – and prone to a strong cross-rip when the tide is in full flood. To make matters worse, the dredging licence has been exploited to the benefit of the yachting fraternity and marina-users, and to the detriment of commercial operators, leaving the Harbour mouth with the extra hazard of a sand-bar that has caught out even the odd unwary local.

The Swing-Bridge is a bottle-neck that sets a non-negotiable limit to the beam of any vessel bound for Endeavour Wharf. Those huge wind-farm service catamarans were never going to be able to come here. 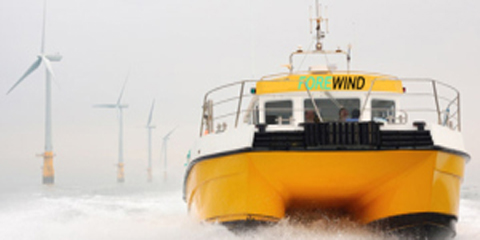 Equally obvious is the inadequacy of transport access by rail (single track from Middlesborugh) or by road (down Bagdale). Whitby is in every way simply unsuitable.

Meanwhile, industry experts were questioning the basic viability of the Dogger Bank proposals; too costly to build and maintain, too uncertain a power source given the vagaries of the wind, too dependent on conventional back-up systems. Even in the aftermath of Fukushima, some pundits still favoured the nuclear option.

In June of last year (2011), I emailed SBC Portfolio Holder and Chair of the Whitby Harbour Board Councillor Mike Cockerill, to draw his attention to an article in WindPower Monthly in which Professor Dieter Helm (New College, Oxford), advisor to the European Energy Commission, was quoted thus:

Readers will be unsurprised to learn that Mike Cockerill has not bothered to acknowledge my email – much less respond to it. Why was that, Mike? No leg to stand on?

On 2nd July 2011, the Telegraph published an article under the by-line of that fastidious researcher Christopher Booker, entitled “Proof that the Government is tilting at windmills”. It begins:

It is well worth a read.

For the past twelve months, SBC has been somewhat muted in its response to that information.

Meanwhile, on 8th May 2012, FOREWIND (a consortium of four leading energy companies) has announced public consultation of its proposals to base all of its Dogger Bank windfarm activities in – guess where – yes, Teesside.

SBC has not commented on how exactly this will “bring thousands of jobs” to our area.

Presumably it will entail the same ‘creative accountancy’ as will deliver the 5,000 SIRIUS potash mining jobs.

One might reasonably ask whether our Councillors and their Officers are quite simply far too gullible – or inconceivably incompetent – or both. Or do they just do as they are told by the Europhiles at Local Government Yorkshire & Humber, where the real decisions are made? (You do know about them, don’t you?).

What beats me is why we go on giving credence to these ‘dangerous children’ at all.

As we have seen, they are all wind. And pith.