Further to last week’s article “WTC – Toilets: “What Could Go Wrong?”” reporting on the raw sewage leak in the lower horse field to the west of Whitby Abbey Car Park (see below), a week has now passed since the incident was brought to the attention of Yorkshire Water and Scarborough Borough Council.

I regret to report that the flow of untreated sewage continues as before.

I attended the site on Friday 18th August 2017. Present were my wife and myself, two employees of SBC, an operative of Yorkshire Water, a concerned member of the public (who had been calling everyone imaginable in the forlorn hope of arousing some action), former SBC Councillor Mike WARD and Whitby Town Councillor Ian HAVELOCK.

The chap from Yorkshire Water was very helpful. He showed us, on his proprietary portable computer, the official YW map of assets. Clearly, neither the leaking man-hole cover nor the pipework to and from it were marked on the map.

The tentative conclusion was that the system must have been installed by SBC when the car park and toilet block were built. Nobody could remember when that was. Unfortunately, neither of the SBC guys had any knowledge of it.

Irrespective of the question of ownership and responsibility, the immediate concern was to stop the leak. This necessitated gaining vehicular access to the lower horse field through two padlocked gates, the keys to which had somehow been exchanged for other keys, in error, with the result that the keys brought along by the SBC chaps did not fit the padlocks.

I must commend both SBC chaps for their good-natured willingness to embrace public input and local knowledge. Similarly, the chap from Yorkshire Water could not have been more open and helpful. Thank you, gentlemen. Very much appreciated indeed.

I later learned that after my departure, the Police were called in response to some sort of fracas between a member of the public and the public service personnel, though I cannot report on that with confidence.

I can report that today (Monday 21st) in the late afternoon, the untreated sewage leak was still flowing freely, swilling used toilet tissue, tampons and sanitary towels down the field and amassing an open pool which encroaches to the very edge of the public footpath. 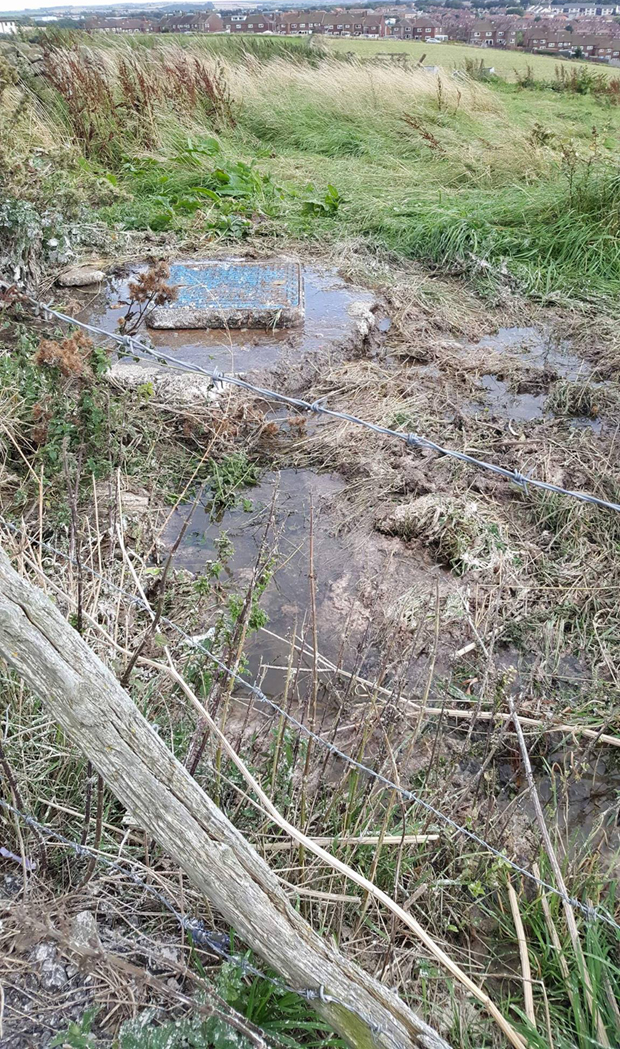 As I write, it is approaching 8:30pm on Regatta Monday 21st August 2017. Over the weekend, thousands of people have walked from the Abbey Car Park into town within three or four feet of what amounts to an open cesspool which continues to seep away to the west, down the lower horse field towards the houses on Aelfleda Terrace.

A member of the public tells me that the untreated sewage is still flowing, as I write. Apparently, a report was made to SBC Borough Engineer John WOODHEAD over a week ago, before my own report to Yorkshire Water. Mr WOODHEAD reportedly stated that he had been aware of problem for a couple of weeks or more, but assumed that Yorkshire Water would be taking care of it.

Meanwhile, the RSPCA has made a site visit in response to concerns that the seven horses may be at risk and, in any case, had been without fresh water for the last forty-eight hours.

I find it astonishing that this very unpleasant (it stinks to high heaven) and unhealthy situation has persisted for so long.

It really should not be beyond the wit of man to rectify the problem. If the blocked pipe and leaking man-hole cover are indeed SBC assets, then it really is past time for SBC to pick up the responsibility and solve the problem. And I would doubt that I am alone in believing that, had a similar leak sprung up in Scarborough’s St Nicholas Gardens . . .