One rare fine morning, at the beginning of July 2011, I was standing at the most north-westerly corner of the graveyard of St Mary’s Church on Whitby’s east cliff, admiring the unique view of Whitby’s famous harbour mouth – scene of thousands of ‘farewells’ and ‘welcomes’ for Whitby’s once-proud whaling fleet.

I say ‘once-proud’ because times have changed; we live in a rather more enlightened era.

Today, it is widely accepted that all the great sea-mammals – whales, dolphins, manatees and dugongs – are amongst our closes evolutionary relatives.

Thinking about this, and imagining the spouting of a whale as a statement of identity and liberty, I was reminded of another famous waterspout.

In the late ‘seventies, and again in the early ‘nineties, I lived for some months in the beautiful Swiss city of Geneva (Genève) on the shores of Lake Geneva (Lac Leman), where, directly in front of my apartment windows, spouted the celebrated ‘Jet d’Eau’: 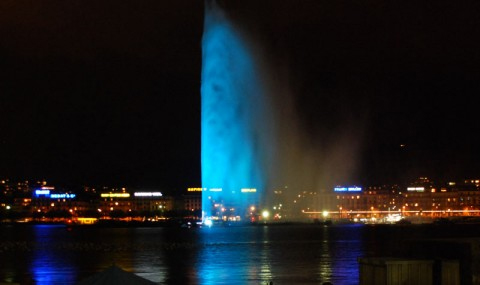 The ‘Jet d’Eau’ is a magnificent 140-meter fountain, visible for miles by day and by night, when it is illuminated by constantly changing coloured lights.

So there I stood on the East Cliff, contemplating Whitby’s whaling heritage and recalling the majestic ‘Jet d’Eau’ in Geneva. Then came my moment of ‘inspiration’. 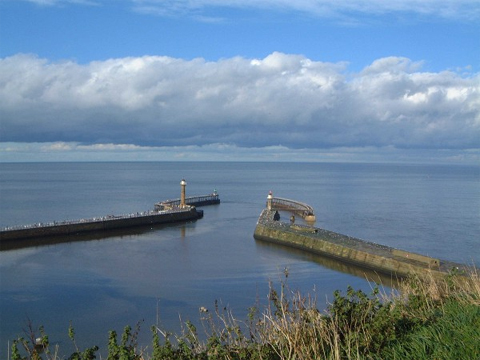 Imagine not one but two water fountains, rising from backs of two statues of whales situated on the ‘bull-nose’ platforms at the ends of the East and West Piers, and forming the world-renowned shape of the Whitby Whale Bones. 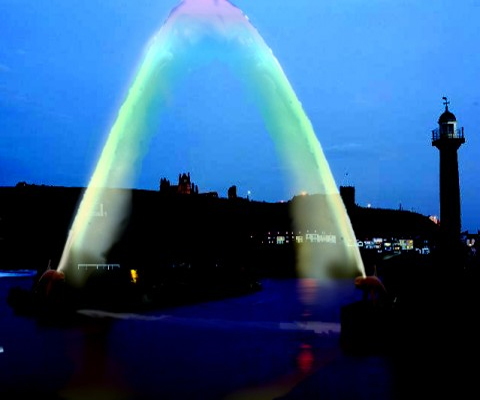 By night, visible for Blue Bank, Lyth Bank and the approaches to Whitby from the Scarborough road, this multi-coloured water-arch would look magnificent.

What could be more appropriate to Whitby?

Even the word ‘Jet’ has an ineradicable association with Whitby.

And the ‘bull-nose’ platforms at the ends of the Piers have stood empty, as if awaiting a fitting tribute to magnificent creatures that provided the life’s-blood of the town in days of the Scoresbys.

By day, picture the twin plumes of white water throwing up a unique Whitby greeting (or salutary farewell) to visiting sailors. 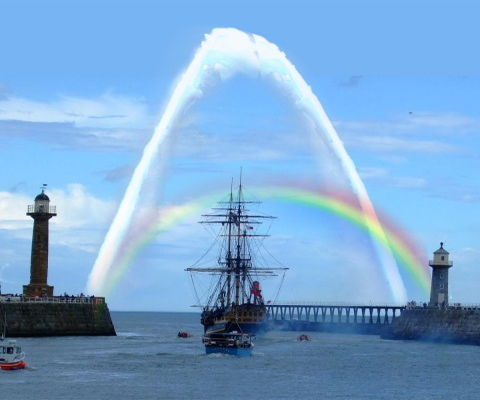 As a life-long composer of predominantly orchestral music, for film and television, and a director of community-films here in Whitby, I know from experience that it is all too easy to fall victim to being captivated by a momentary ‘inspiration’, only to find, on careful reflection, and after conferring with others, that the ‘inspiration’ is flawed and destined for ‘the cutting-room floor’.

So I adopted the sensible course of floating the idea amongst a few friends and acquaintances whom I know have a specially love for Whitby.

Here are their responses.

If you like my “Whitby ‘Jet d’Eau’ Whaling Memorial”, please contact me, in the first instance by email, and let me know how you would like to help to make this uniquely Whitby project a reality.

Thank you for your time and for your consideration.

Readers may wish to listen to my “Whitby in Stone” Overture, here: