Regular readers will, no doubt, recall the Vote of NO CONFIDENCE in the Leader of Scarborough Borough Council, Councillor Derek BASTIMAN, and his then Cabinet, which took place at the Extraordinary Meeting of Full Council on Monday 26th June 2017.

Without prior notice to Councillor Sam CROSS (the Proposer of the Motion) or any of the other signatories, the Leader, his spouse Councillor Lynn BASTIMAN [Con.], and his Cabinet, in recognition of their respective conflicted interests, relied upon so-called ‘Special Dispensations’ allowing them to take part in the debate and vote on the Motion of No Confidence in – themselves. These ‘Special Dispensations’ were granted by Director of Legal & Democratic Services and Monitoring Officer, Mrs Lisa DIXON, who relied (allegedly) on external legal advice obtained from Bevan Brittan LLP to uphold her decision.

On 29th June 2017, I submitted a Freedom of Information request via the WhatDoTheyKnow.com website.

With reference to the special dispensations made public in the Extraordinary Meeting of Full Council on Monday 26th June 2017, permitting the Leader and the seven Cabinet Portfolio Holders to vote on a Motion of No Confidence to which they themselves were identified subjects, please provide copies of all correspondence, including:

TO and FROM Bevan Brittan LLP, in respect of client instructions, clarification, legal advice and/or whatsoever other correspondence pertaining to the above matters, between the dates of 1st April 2017 until the date of your timely response.

I was trying to establish whether or not Mrs DIXON’s alleged ‘external legal advice’ actually existed. This request, set out clearly, concisely and courteously, was (and is) of profound public interest. Is it a “vexatious” request? No.

On 25th July 2017, the last available day for a lawful response, SBC responded, refusing to provide the requested information, citing s.14(1) of the FOIA, which states:

(1) Section 1(1) does not oblige a public authority to comply with a request for information if the request is vexatious.

Let me repeat that last phrase:

Later in this article, I will substantiate my view that while a request may be deemed “vexatious”, a requester may not; each individual request must be determined on its own merit. This did not prevent SBC from persuading the ICO that requests from alleged members of an alleged ‘campaign group’ of which I am allegedly a member (no evidence provided – none exists) represented legitimate grounds to deem any and every request from me to be “vexatious”.

And, by the way, SBC also ignored the very first Article of the Freedom of Information Act 2000:

1 General right of access to information held by public authorities.

(a) to be informed in writing by the public authority whether it holds information of the description specified in the request, and

(b) if that is the case, to have that information communicated to him.

SBC did not confirm whether or not it held the requested information.

Not only was this a breach of the terms of the Act, it was a downright deception. How do I know this? Because, in a response to another requester, the Council admitted (or claimed) that, though no written record existed, external legal advice had been sought – and received. Honest, guv:

“the advice was given during a telephone conversation. This advice was not recorded and therefore the Council does not hold the information”.

Do you believe that SBC does not maintain telephone logs – at least in the Legal & Democratic Services department? Do you believe that it is appropriate to obtain crucial external legal advice over the telephone – with no confirmatory contemporaneous notes (even hand-written) or follow-up email or letter? Do you believe that SBC has no facility for recording and archiving important telephone conversations on the subject of legal advice on fundamental governance issues? Mrs DIXON was challenged at the time. What was to prevent her asking Bevan Brittan LLP for a letter of confirmation, for publication?

SBC deliberately evaded confirming to me that the information was ‘not held’, whilst disclosing it quite openly to another requester. One might be forgiven for concluding that the Council discriminated against me. I would like to pursue that suspicion.

In refusing my FOIA request, the Council cited a decision of the Information Commissioner’s Office (ICO) relating to a series of FOIA requests submitted not by me but by someone else. What had that to do with me? Well, allegedly, that someone else belonged to a ‘pressure group’ (elsewhere described as a ‘campaign group’) to which I allegedly also belong, whose “collective stated aim [was] to cause nuisance and disruption to the Council”.

The Council’s response went on to refer to “your [meaning the “campaign group members'”  ] group website”. In other correspondence, this has been particularised as referring to the North Yorks Enquirer.

I am not the Owner/Editor/Webmaster of the North Yorks Enquirer. I do not belong to any ‘pressure group’ or ‘campaign group’, although I am entitled to do so (with the exception of certain proscribed terrorist groups). The only ‘campaign group’ to which I could, very loosely, be said to belong is the wider public.

In any case, ‘pressure groups’ and ‘campaign groups’ are legitimate democratic movements. The Conservative & Unionist Party is a ‘campaign group’ whose objective it is to influence public opinion.

For the avoidance of any doubt, my own objectives – shared by at least 30% of Councillors (of all parties) and thousands of followers on a number of social media platforms – are as follows:

1) to hold to account elected and paid public servants;

3) to detect and/or prevent crime in the public sector;

4) to highlight incompetence, waste and negative value-for-money transactions in the public sector;

5) to further the legitimate aspirations of my community.

The Leader, his Cabinet and the Directorate could hardly find these objectives in any way disagreeable – unless, that is, they have reason to fear the kind of in-depth scrutiny that, in our area, only the Enquirer provides. Those public servants who do stand accountable for their conduct, who do uphold high ethical standards, who commit no crimes, who do work diligently at their jobs and create positive value-for-money solutions, and generally do their level best for their masters (the public) have nothing to fear from me.

I am glad to confirm that two members of the present Cabinet willingly engage with me, by email, by phone and in person, and together we have worked successfully to resolve a number of important issues. I am grateful for that – but, in fact, what it highlights is that the other six must have some issues of their own that makes it necessary for them to lie doggo. I look forward to revealing what those issues are.

Irrespective of the opinions held by the Legal & Democratic Services department of Scarborough Borough Council, there is no such thing, in law, as a “vexatious” requestor, as Judge Stephen CRAGG QC, in Arnold -v- ICO (July 2018), makes clear, at para.24 of his Judgment:

The Local Government Ombudsman’s interpretation of the law (as extracted from the website, and set out below) seems to have been disregarded by Scarborough Borough Council. 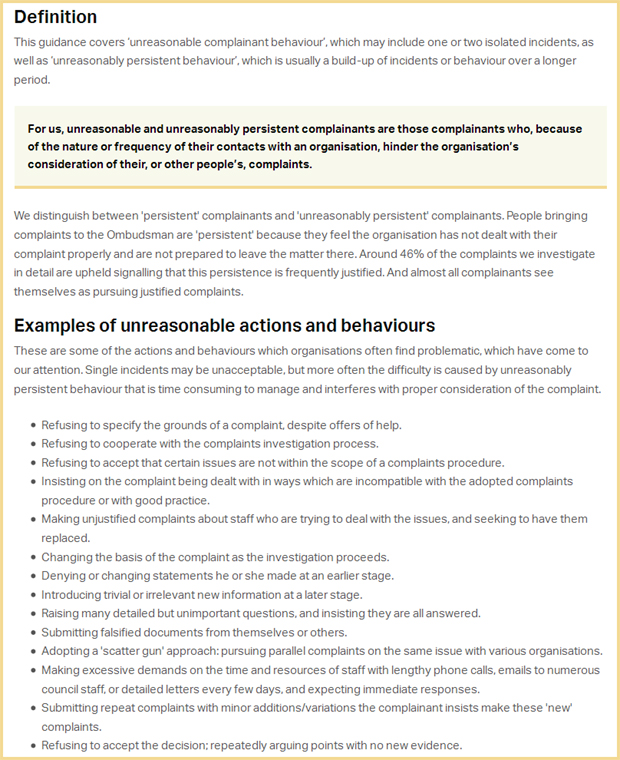 It should be obvious that if SBC held any evidence whatsoever of me conducting my Formal Complaints to the Council in a way that falls foul of the above criteria, that evidence MUST be included in the Council’s recent response to my GDPR Subject Access Request – under which the Council is bound, by law, to provide me with any and every document it holds that includes any reference to me and my published works. But the cupboard is bare.

Also absent from my SAR response is any acknowledgement or response to several very grave Formal Complaints (some of which have been published on the Enquirer) which have been totally ignored.

Also absent from my SAR response was any statement by me to the effect that it is/was “my stated aim to cause nuisance and disruption to the Council”. That is a malicious lie, any evidence in support of which either does not exist or has been illegally withheld by the Council.

I hope and expect most readers will by now have concluded what I have concluded – that SBC’s true reason for ‘deeming’ me “vexatious” and an “unreasonably persistent complainant” is that time and again I have exposed laziness, sloppiness, stupidity, incompetence, dishonesty, cover-up, corruption and the most outrageous acts of disregard for the Council’s own Constitution and the law of the land.

“They don’t like it up ’em, Captain Mainwaring” – and that is all she wrote.