Fundamental to the principles of democracy, the right to vote anonymously, in the confidence that one’s vote will be counted and tallied correctly and will contribute to the electoral process determining decisions of a public nature, is sacrosanct.

Regular readers will be aware that there is great contention at present over the way in which the electoral process to ratify the Yorkshire Coast D-BID was conducted. Many questions have arisen. Answers have been less numerous.

One question which has not, to my knowledge, been asked is:

Contemplating this question, I wondered how it could be that the list could include defunct businesses? Surely, SBC maintains up-to-date records of all qualifying businesses? After all, SBC sends out invoices for business rates to all eligible businesses and (you can be sure) pursues non-payers with the full rigour of the law.

This begs another question:

Setting aside, for the moment, any concerns of impropriety, an inflated number of ballot papers must result in a perceived lower turn-out than would the correct number. Thus, the Declaration of Result of the Poll may have been compromised.

But this is by no means the most serious implication.

In this country, the way in which one casts one’s vote – FOR or AGAINST (e.g. LEAVE or REMAIN) – is a private matter. An elector may publish the way she/he has cast her/his vote – or hold it private and confidential – secret. The D-BID ballot was stated to conform to these principles: 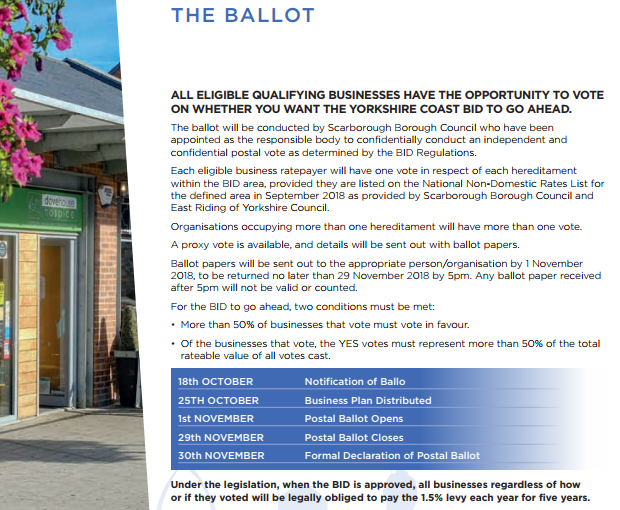 In the present case, we know that SBC voted in favour of the D-BID on behalf of 32 ‘businesses’ in its (i.e. the public) ownership. That some of these ‘businesses’ are car-parks and public conveniences has raised eyebrows; how did any given car-park arrive at the decision to vote – FOR or AGAINST?

I am, of course, being facetious. But there has been much enquiry into the identity of the person who cast SBC’s 32 votes FOR. Some point to Councillor Andrew JENKINSON [Con.], who, at the time of the vote held the Tourism Portfolio, but has since ‘stepped down on grounds of health concerns’. Councillor JENKINSON is, of course, a NYCC Councillor (c. £11K p.a. Basic Allowance, plus expenses, inc. mileage) where he has another two years in which to contemplate whether or not his health concerns are so serious as to prevent him from standing for re-election to NYCC. Fortunately, Councillor JENKINSON is reported hale and hearty at present and raring to go to the polls on 2nd May for re-election to SBC (there’s another c. £4K Basis Allowance).

My own opinion is that the casting of those votes would fall within the gift of the Leader, Councillor Derek BASTIMAN [Con.], possibly having consulted the advice (i.e. diluted his accountability) of the Portfolio Holder for Corporate Investment Councillor Helen MALLORY and a member of the Directorate – either Finance Director Mr Nick EDWARDS or Commercial Director Mr Richard BRADLEY. But you know how it is; when the tail wags, the dog nods. By which I mean that the CEO quite possibly had a finger (but not a fingerprint) on it.

Be all that as it may, I come now to the most disturbing aspect of all.

For those who are unfamiliar with the location, here is a map of the immediate area: 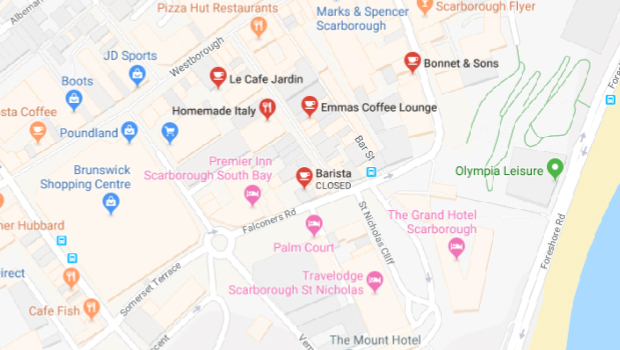 It is interesting to note that Google Maps has Barista listed as CLOSED. 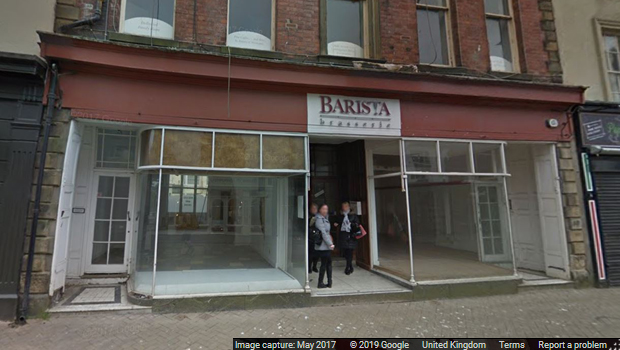 Clearly, Barista has not been trading at 6-10 Huntriss Row for some time. I mention, only in passing, that Barista at Flamingo Land is presently advertising for staff. It is a small world.

I now ask readers to consider my next question:

One problem we have here is that, like all electoral ballots in the UK, the D-BID ballot was a secret ballot.

Isn’t that cute? It will be difficult to investigate whether or not a vote was cast on behalf of Barista, or by whom, and which way it was cast.

Of course, detractors will contend that in a ballot carried by 217 votes FOR versus 175 AGAINST, this Barista ‘ghost’ vote is neither here nor there.

I am not so familiar with Scarborough today, but I am sure Scarborough readers will find themselves able to add to the few apparently defunct business which were passed to me by my second caller: 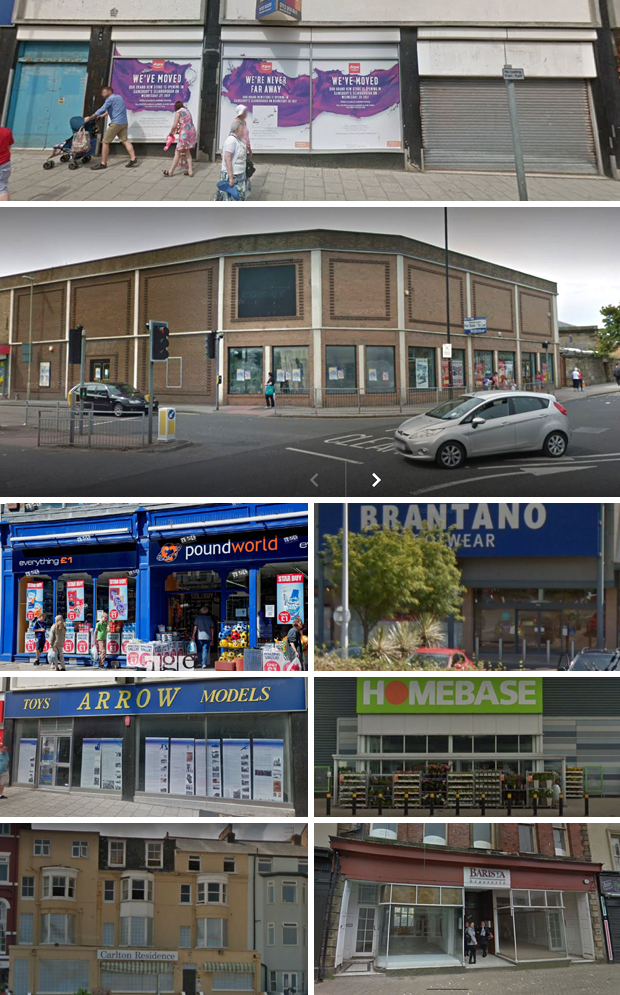 Which brings me to my fourth and final question. I sincerely hope that Councillors will seek answers to all four of these questions at the forthcoming meeting of Full Council on Friday 2nd March 2019:

I think we should be told. Were there many ‘ghost’ votes? How many?

Let it be clearly stated that I am not – not for one moment – suggesting that somebody at Mosaic Ltd, or at Scarborough Borough Council, has tampered with the ballot in this or any other way. Perish the thought. What I am stating is that there are cogent reasons to believe that the design and conduct of the Poll was flawed in that it was clearly susceptible to the charges that:

Without clear evidence that NO ballot papers are unaccounted for, NO businesses have been deprived of a vote, NO defunct businesses have cast votes (or had votes cast on their behalf by an unidentified third party) and NO impropriety of any kind has take place within any aspect of the electoral process, then the Returning Officer – if only to allay any doubts about his own integrity – MUST surely declare the ballot NULL & VOID?

What about it Jim? Can you step up to the “…and be seen to be whiter than white” credo, afore ye go?