– an “In My View” article by NIGEL WARD, reporting on another defamatory attack on the North Yorks Enquirer.

Not too long ago, Scarborough Borough Council Solicitor David KITSON rejoiced in an even grander title – ‘Senior Solicitor’. This had the unfortunate consequence of falling victim to a form of abbreviation that caused David KITSON considerable personal embarrassment – the Senior Solicitor soon become known as “The SS”. One might have expected him to moderate his high-handed writing-style (without which the abbreviation would never have caught on) but it was his preference to accept the less evocative title ‘Solicitor’.

As related in my recent article, David KITSON sent emails to me and to my fellow investigative-journalist Tim THORNE informing us that all of our requests for information under the terms of the Freedom of Information Act 2000 were deemed “vexatious” and our Formal Complaints were to be ignored because they are “unreasonable” and “unreasonably persistent”. The Information Commissioner has stated that the term “vexatious” is not even defined in the legislation. Any definition elsewhere carries no legal weight. David KITSON knows that. Any old bullshit will do when you have your back to the wall.

The fact that there is no statutory basis on which to ignore FOIA requests – or to disregard Formal Complaints – does not prevent David KITSON from faithfully following “his master’s voice”. But David KITSON is most certainly aware that local authorities may only perform such acts as are specifically authorised by statute – unlike the public at large, who may perform any act not specifically prohibited by statute.

Actions performed by Councils, including their agents (and David KITSON is such an agent) that are not specifically authorised by statute are said to be “ultra vires” (literally, “beyond authority”) and are illegal and addressable by the Courts. In practice, of course, nothing ever happens.

Before proceeding to the main thrust of this article, I would remind readers that people in public life – MPs, Councillors, Council Officers, Police Officers and so on – are public servants, paid or not. As such, they are accountable to the public for actions they take in the execution of their duties as public servants.

They are not accountable to the public for actions they take as private individual human beings. In that realm, they are accountable to the law. But they are entitled to the same privacy as the rest of us and their rights are enshrined in the Human Rights legislation.

My familiarity with David KITSON extends only to his actions as a paid public servant.

One difficulty that faces investigative-journalists at every turn is that most public servants have not accepted that it is a fundamental pillar of democracy that public servants must be transparent and open to scrutiny – and to criticism; they take it all too personally.

To state that, for example, Lisa DIXON has acted incompetently – or even dishonestly – in her position as SBC Director of Legal & Democratic Services is not to state that she is an abject failure as a human being, a wife, a mother, or whatever. It is a criticism of her actions in her position as a paid public servant; her conduct as a private human being has never been called into question by this organ.

But when Lisa DIXON, in her position at SBC, states that Tim HICKS, Tim THORNE, Glenn KILPATRICK and I have committed criminal acts, it is perfectly proper for us to challenge that statement, and to demand to see evidence supporting her allegations. Equally, it is perfectly proper to criticise Lisa DIXON when it becomes clear that her allegations were totally unsubstantiated and, in fact, highly defamatory. It is proper to expect a retraction and an apology.

Again, it is important to be clear that such criticism is levelled at Lisa DIXON only in her position as a paid public servant, and not as a private human being whose rights to privacy are the same as yours and mine.

Similarly, when the BBC ‘Inside Out’ documentary showed Director of Legal Lisa DIXON to have lied about her attempt to “terminate” the Real Whitby web-site, presenter Chris JACKSON was not criticising her behaviour as a human being – only her actions as a paid public servant.

In this sense, Lisa DIXON has two identities – a public servant identity and a private individual identity; she has the best of both worlds. Members of the public are private human beings and have only one identity. So any attack against any single member of the public is a personal attack. It is also an attack on the public at large.

Lisa DIXON knows that, in her public servant identity, she is effectively untouchable. So she uses the professional invulnerability of her Council position to make personal attacks on me and my colleagues to satisfy her animus against us, because she holds us responsible for the scathing criticism that has been levelled at her in the national press – though that criticism is actually a fair and just consequence of her own unprofessional actions in her public servant position; an abuse of position and therefore deeply corrupt actions.

As human beings, we all form attachments. These attachments generally engender feelings of loyalty.

Normally, one experiences the strongest sense of loyalty to family members, to personal friends, to favoured clubs or political groups, to close work colleagues, etc. In a very real sense, loyalty is the glue that binds relationships and helps them to survive through adversity.

But loyalty can be blind. And misplaced – as my colleague Tim HICKS so ably demonstrated in his article “Jimmy Savile and Peter Jaconelli: The dangers of Misguided Loyalty”, in which he exposes the mechanism that protected SAVILE, JACONELLI and Jimmy CORRIGAN (see Dan DAVIES’s newly-published biography “In Plain Sight: the Life and Lies of Jimmy Savile”, published yesterday by Quercus Books and available at Amazon, here) was entirely reliant on misguided loyalty between and amongst perpetrators, Police Officers, Council personnel, etc. The same mechanisms protected Peter JACONELLI.

It is the misplaced loyalty amongst Council Officers and amongst elected Councillors that prevents wrong-doing within the Council from being rooted out. The same is true of our Police Force. Too many public servants give their first loyalty to their colleagues (“We’re all in this together”), irrespective of whether or not members of the public are justified in their complaints – though, in fact, their first duty is to the public – not their colleagues.

In the age of the internet, it is easy for any member of the public to voice criticism. Social-media and emails make it possible to disseminate criticism to a wide readership. Not all such criticism is justified or supported by evidence and much of it is nothing but ineffectual hot air.

That is why we at the NY Enquirer have provided copious evidence in support of our criticisms and complaints. This is why the BBC is able to broadcast them without fear of libel action. Same with the Private Eye. We are not in the business of making unsubstantiated allegations and neither is the Beeb or the Eye.

So the kind of attack made upon us on FaceBook recently is not only utterly without foundation; it is defamatory (in fact, libellous) and it is, frankly, just plain stupid. 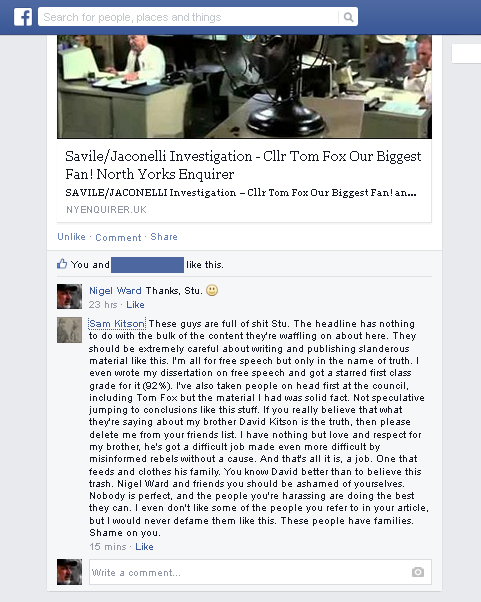 I hope readers will recognise that David KITSON has been the object of misplaced loyalty on the part of his brother, whose statement we see here (above). But Sam KITSON is not merely ‘sticking up’ for his brother. He is making false statements to do so.

He is also talking nonsense. His commendable 92% in free speech is not undermined by his ignorance of the distinction between slander (spoken defamation) and libel (written defamation) – but his judgement is.

Sam KITSON is proud of his record in ‘taking on’ people at the Council – including Tom FOX – but omits to mention that FOX is still in office and his (Sam KITSON’s) efforts at ‘taking him on’ achieved nothing, if they ever took place.

Curiously, it would appear that Sam KITSON, when not behaving partially in favour of his brother, sees himself as something of an activist. His FaceBook banner clearly flies the flag of the alternative camp, in the public domain. Misplaced loyalty makes exceptions for family members.

Yet Sam KITSON describes us as “rebels without a cause”.

Our ’cause’ could not have been more clearly stated. We oppose (and expose) corruption. Untold thousands support that cause

It is touching to learn that Sam KITSON has nothing but love and respect for his brother David. I can well believe he owes him a lot. But that love, and that respec, and that gratitude has blinded Sam KITSON to the facts of the matter, which are:

People tend to lose their objectivity very quickly when a personal connection to the subject matter arises.

In short, Sam KITSON comes across as a harmless enough lad, though rather confused. His remarks to the effect that brother David KITSON is ‘just doing a job . . . that feeds and clothes his family’ are sinisterly reminiscent of other apologists who have claimed that convicted sadistls were ‘just following orders’.

As Edmund BURKE so wisely wrote:

And if Sam KITSON is unable to set his brotherly loyalty in the balance along with the true facts of the matter, then he should really consider keeping his bias to himself – which, in fact, he has now already done.

That screenshot (above) was taken just in the nick of time. Just a few moments later, Sam KITSON’s posting was deleted. A fine example of a man with the courage of his convictions.

Maybe David KITSON – “the ‘redaction’ king” – told him to ‘redact’ it before those “rebels without a cause” caught sight of it and used it to further discredit the already discredited.

But let us be careful not to blame David KITSON for the follies of his brother. He is not – or should not be – his brother’s keeper . . .

So no more dirty tricks, please, boys. Okay? That would be very tedious. 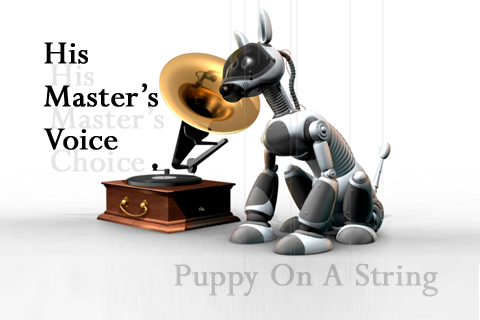