In a recent article, I wrote that “Project Servator is an initiative to disrupt reconnaissance by terrorists planning an attack. The intention being to disrupt terrorist reconnaissance at an early stage. This is an innovative and pre-emptive strategy, which is new to North Yorkshire”.

“Hostile reconnaissance is the purposeful observation of people, places, vehicles and locations with the intention of collecting information to inform the planning of a hostile act against a target. Criminals, whether extreme protest groups, organised crime or terrorists, have to conduct hostile reconnaissance in order to plan a successful attack. If we can disrupt and deter them at an early stage, it is likely they will abandon their plans”.

Project Servator activity is intended to:

When any military installation or large public gathering can be attacked, this is clearly a necessary precaution to take, in these violent and unprecedented times. Officers from North Yorkshire Police are pictured above working with their colleagues in the Royal Military Police on Project Servitor duties.

On a personal note, I was affected by two bomb attacks by the IRA at the Depot Regiment Royal Artillery in 1981 and 1983. On both occasions the IRA cell was able to recce the area effectively, get in and plant the bomb, then get out without being spotted. No one was ever arrested for these offences and we were very lucky not to have any fatalities. I cannot help but speculate that if Project Servator type surveillance had been operating in Woolwich at the time, it may have been a different story.

It is inevitable that officers from different forces will be deployed out of their own force areas to other forces, to provide support, based on threat assessments and the timing of local public events. NYP Officers have recently been providing extra manpower to the Metropolitan Police and this is covered in this news article from the NYP website. 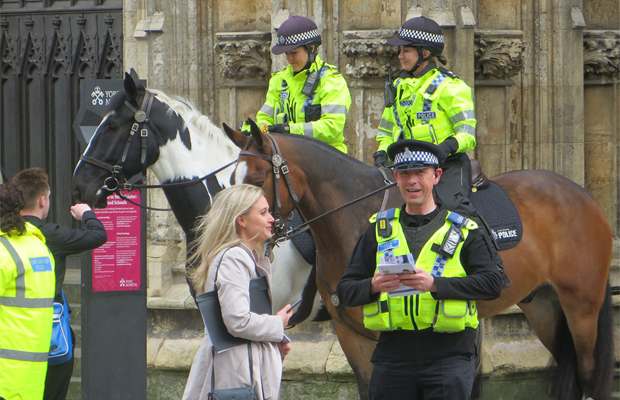 On a related topic, North Yorkshire Police have also issued this appeal from Action Counter Terrorism to report on line extremism: