HM Inspectorate of Constabulary, Fire and Rescue Services has issued its “PEEL Assessment” for Effectiveness on North Yorkshire Police (NYP) for 2017.

What is a PEEL Assessment?

“PEEL is an annual assessment of police forces in England and Wales. Forces are assessed on their effectiveness, efficiency and legitimacy. They are judged as outstanding, good, requires improvement or inadequate on these categories (or pillars) based on inspection findings, analysis and Her Majesty’s Inspectors’ (HMIs) professional judgment across the year.

The pillars each comprise three or four questions that focus on core areas of the work of the police. Judgments are also applied to these questions.

At the end of the PEEL year (in March), HMIs bring together all the judgments made throughout the year together with other findings and information to produce a rounded annual assessment of each force.

HMICFRS inspection staff visit all 43 forces in England and Wales to gather information for the PEEL assessments. As part of each inspection they speak to police officers and staff, hold focus groups and interviews with other interested parties, carry out document reviews and collect data.

The inspections take place throughout the year. The findings are analysed and moderated, and then published – pillar by pillar. The individual police force’s PEEL assessments are updated on the website as new information becomes available, and detailed reports for each police force are published.”

This is clearly an important annual event for each force, assessing its performance across all of its activity and comparing it to the performance of other forces.

Please see below the three individual HMICFRS 2017 PEEL Reports for North Yorkshire, for the three PEEL pillars, which make up the overall PEEL Annual Assessment:

With the publication of the final effectiveness report in March, HMICFRS was able to issue the overall HMICFRS PEEL Annual Assessments and national policing report.

So how did NYP do?

I was impressed to read the following statement from the PCCNY, Mrs Julia Mulligan: 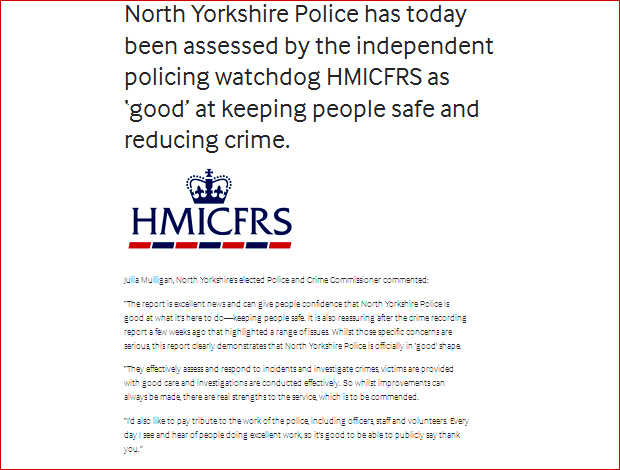 Issued in suitably gushing terms and obviously drafted by one of the PR Wonks Mrs Mulligan employs on our behalf to project her image in a better light. However, knowing Julia as I do, it was obvious that some independent oversight and checking by citizen journalists was necessary……….

The HMICFRS Assessment: The facts.

Please see below a summary of the HMICFRS PEEL Annual Assessments for 2015, 2016 and 2017, which incorporate all three Efficiency, Effectiveness and Legitimacy reports.

The 2017 PEEL Annual Assessment (which is the overall assessment of the force incorporating all three pillars) is not mentioned in Mrs Mulligan’s statement, or revealed on the Police & Crime Commissioner’s website.  Although the 2016 PEEL Annual Assessment North Yorkshire Police was published on the website when Mrs Mulligan’s statement was issued. This may be because in 2015 and 2016 NYP were rated “Good” in all three pillars, but in 2017 NYP was rated “Good” in two pillars and “Requires Improvement” in one. The implication being that there was a serious decline in performance in 2017 compared to previous years.

Unabashed, PCC Julia Mulligan then issued a misleading report on the impact of the HMICFRS Inspection. She asserted that the HMICFRS CDI Inspection had found “that the service to victims was not impacted”: That was a lie.

The report does not state this and it cannot be construed to mean or imply this. The HMICFRS CDI Report was explicit that victims are let down by NYP. In response to Mrs Mulligan’s statement, HMICFRS took the highly unusual step of issuing a statement to the NYE that contradicted Mrs Mulligan.

Comment 2: In fact the full PEEL Assessment all three pillars shows an overall decline on previous years, with four questions rated “Requires Improvement” instead of one in 2016 and two in 2015.

Comment 3: For the first time, instead of being rated as “Good” across all three pillars, NYP is rated “Good” in two pillars and “Requires Improvement” in one. In 2016 and 2015 it was rated good in all three pillars, so this is a serious decline in performance. 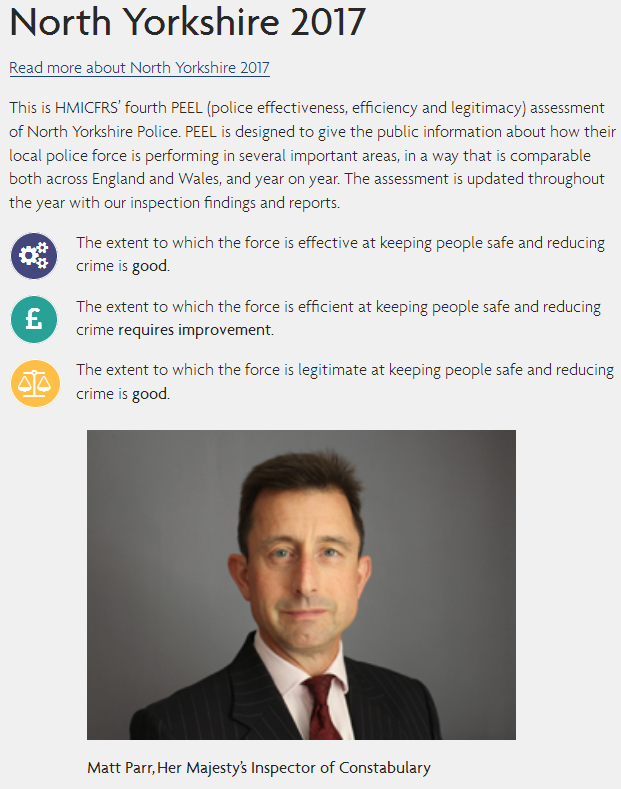 Comment 5: Had the PEEL Report been adjusted for the shocking failures in crime recording revealed by the HMICFRS CDI Inspection, it would have had a dramatic impact. I estimate that the “Preventing crime and tackling anti-social behaviour” question would have had to be rated at “Requires improvement” or “Inadequate”, probably reducing the overall Peel Assessment to “Requires improvement”.

Comment 6: It is clear that when all the facts including the CDI inspection is taken into account, NYP is not “officially in Good shape”.

Comment 7: HMICFRS do not make any statement that NYP is not “officially in Good shape” or any statement that could be construed as meaning that in the Effectiveness Report. The comments in the report relate only to one pillar of PEEL and are not an overview. PCC Mulligan has again misrepresented HMICFRS’s findings.

Comment 8: Far from stating that NYP is “officially in Good shape”, the overall PEEL Assessment states that NYP is inefficient, or more particularly requires improvement in all three questions in the Efficiency Pillar. As shown above, there has been an overall decline in performance compared to 2016 and 2015.

Taking the HMICFRS CDI comments into account, under these circumstances it is clearly not accurate to state that NYP “effectively assess and respond to incidents and investigate crimes, victims are provided with good care and investigations are conducted effectively”.

Police crime statistics and the impression given by the PEEL Annual Assessments are important indicators in Chief Police Officers performance assessments.

I am currently working on a book review of “Catching a Serial Killer” by former Detective Superintendent Stephen Fulcher. I will leave the final word on this to him (Page 56):

“To my mind the most senior echelons in policing today weren’t police officers at all, they were merely puppets blowing with the prevailing political wind. The saying goes that there are lies, damn lies and police statistics, and in our modern-day performance-measurement mind-set you could do quite well for yourself if you played the game”.

The PEEL Annual Assessment is an overall integrated process aimed at giving an overview of a force based on all three pillars. It appears that PCC Mulligan has chosen selectively from one of the three PEEL Pillar Reports, whilst ignoring the other two and the CDI Inspection – thereby presenting a misleading picture overall of NYP that is more positive than was assessed by HMICFRS.

The overall decline in performance of NYP is not mentioned anywhere.

The 2017 HMICFRS PEEL Annual Assessment has not been published on the Police and Crime Commissioner for North Yorkshire’s website or commented on, probably because it shows a serious decline in performance compared to previous years.

In my opinion, it is wrong to choose selectively from one constituent report and hold out it applies overall, without revealing the consolidated view.

Previously, only the detailed analysis provided by the NYE exposed the full extent of NYP’s failure in crime reporting and its impact on victims. When we revealed that the press comment from PCC Mulligan on the CDI Inspection had misrepresented Its findings, Mrs Mulligan was asked to comment on this by the NYE, but declined to respond.

This is now the second time in three weeks that Police & Crime Commissioner Mulligan has been caught out by the NYE misrepresenting the outcome of HMICFRS inspections.  Following this latest pronouncement by PCC Mulligan, she was provided with a draft of this article and invited to provide a comment for publication. But none was received.

It has again taken citizen journalism to reveal the true facts. Yet again, this verifies the need for independent in depth analysis from citizen journalists, to exercise oversight over public bodies. This is now the second time that having issued a misleading statement to her electorate she has had this brought to her attention and has failed to withdraw the statement.

Maybe someone can explain to me how this is consistent with her oath of office, to “take all steps within my power to ensure transparency of my decisions, so that I may be properly held to account by the public.”?