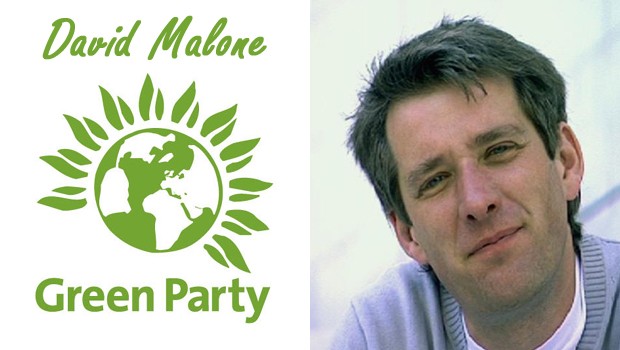 A Letter to the Editor from David MALONE – the Green Party Prospective Parliamentary Candidate for the Scarborough & Whitby constituency, introduces himself and presents his case for election.

I’m the Green Party candidate for Scarborough and Whitby. My background is in science. For the last 25 years I have made science documentaries for BBC and C4. In 2010 I wrote a book about the Financial crash. I now write one of this country’s larger and more respected financial blogs. In the Green party I am one of the people that specialises in finance. I have lived with my wife and three boys in Scarborough since 2003 and continue to make documentaries.

The Green Party believes that our political and financial system is broken and it is time to stop tinkering and time – long past time – to find the courage to build something new, something that actually works.

From Thatcherism to New Labour I have heard the same promises and policies repeated over and over and watched them bring us to where we are today – the deepest and longest recession since the Great Depression. The major parties tell us they will fix it for us if we just vote for them one more time. If they were going to fix things they have a generation to do it. They haven’t.

They all tell us that there is just no money left and everything must be cut back, sold off or closed. And yet not one of the major parties has done anything meaningful about making the tax dodging corporations pay the tax they have not paid us for years. Make them pay and we would raise far in excess of 40 Billion pounds over the next parliament. A very small financial transaction tax on every trade made in the City would raise another £40 billion-plus. A modest wealth tax on the richest few percent would raise over £35 billion. There is plenty of money, but none of the major parties have raised a hand to get it. Perhaps they don’t want to bite the hand that funds them? The Green Party has no such conflict of interests.

The means to solve the present crisis, without doing so on the back of the poorest, are lying unused. But the traditional parties are either lost, afraid or bought and paid for. They are in a dead end. One faces left, the other right and they argue about which way to go. But none of them are going anywhere.

I believe the day of reformist politics is over and we either fix our democracy or learn to grovel. Zero hours contracts; 900,000 people using food banks last year; 18 million pounds a day being sucked out of the NHS into profit seeking private companies and nothing whatsoever done to reign in the banks or stop another housing bubble which is already growing.

This is happening on our watch. Not comfortably far off in the future, but now. What will we say to our children? We were too busy watching tele? We didn’t know? We do know. No-one is going to fix our wonderful nation for us. All it is going to take to change our lives and our society is for ordinary people to do extraordinary things. We have done it before in our history. I believe we can do it again.