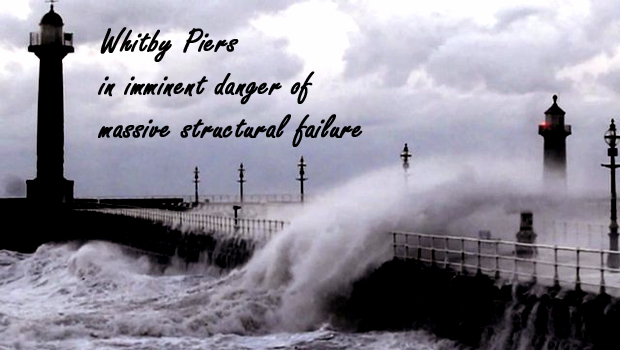 A Letter to the Editor from Derek ROBINSON, of Whitby, who writes as a member of the public who has served for eight years on Scarborough Borough Council and presently represents the West Cliff Ward of Whitby Town (Parish) Council, expressing deepest concern regarding SBC’s present position in relation to the imminent structural failure of Whitby’s historic piers and the lack of a fail-safe strategy to preserve the town’s heritage and safety.

For your Attention Re: Whitby Piers.

Please read this and share with as many people as you can.

I attended a meeting last night and was alarmed by what I learnt, I am going to pass this on to you as I think you have a right to know and will also feel as alarmed as I do.

The anticipated cost of the repairs and reinstatement of the Whitby piers will be £8.522 million of which £4.812 million has been awarded as a grant, so making an estimated £3.710 million SHORTFALL; this is in the anticipated cost not the actual cost which will be determined following the tendering phase. (These are the Council’s own figures).

Where is this shortfall coming from?  Well, the Council says it MUST come from third parties o,r as the Council prefers to call them, “beneficiaries” – just who are these? Yes, you guessed it, you and me as well as businesses in the town and other bodies such as electric, gas, water suppliers and a host of other parties the Council says that NO work will be undertaken until this funding is in place. The reason for this is, I believe, because of paragraph (5.10 in the report to Cabinet dated 20th May 2014) that says the following, and I quote”

“If the works commence on this site, the Council MUST complete the scheme in FULL and comply with the full scope of works envisaged in the PAR.

The Council cannot reduce the scope of the work mid project to suit the amount of grant”.

The Council’s own report says emphatically that this work needs to be done NOW so any delay increases the risk of one or both of the piers failing, the impact of this does not bear thinking about.

The final bit of the report that concerns me is a paragraph relating to the time when tenders have been received that says and I again quote. Option 3 of 3

“The tenders exceed the grant of £4.812m and the beneficiaries are required to make a financial contribution. The council will write to all beneficiaries seeking those contributions (including one from SBC which will be as a result of a Council decision) In the case of the beneficiaries declining to provide the contribution or insufficient funding is secured and the project does not proceed (remember in the report it states that NO work will commence until ALL of the funding is in place) past the tender stage. The 2015/16-16/17 grant of £4.517m WILL be withdrawn and reclaimed by the Environment Agency”.

I am very wary of SBC and I believe that they have covered their collective backsides with this report but I am also conscious that there is an election next year and that just maybe they will use the piers as an election tool. The piers are far too important to Whitby to be ignored or treated this way, sorry for this long rant but I honestly believe you needed to be informed of the situation, so come on let’s start making a noise and get our voices heard.

We on Whitby Town Council are going to make as much noise as we can.  It would be nice to have the support of our Borough and County Councillors as well.