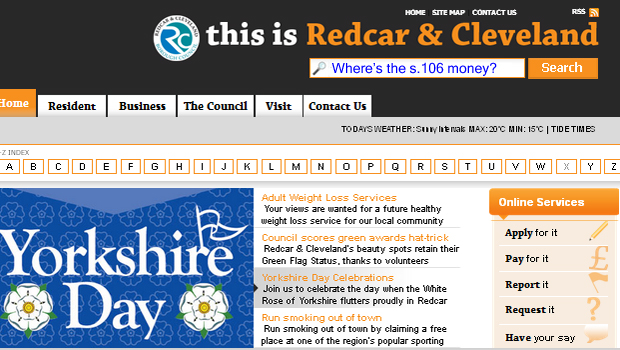 A Letter to the Editor, in the public interest, from Councillor Dr. Tristan LEAROYD, of Redcar & Cleveland Borough Council, who is mindful (as is the Enquirer) of the recent statement made by Secretary of State for Communities and Local Government Eric PICKLES, trashing the National Association of Local Councils’ guidance to Councils, which can be summed up in one sentence:

Eric PICKLES had this to say:

The Enquirer confidently expects Redcar & Cleveland Borough Council to join us in welcoming Councillor LEAROYD’s expression of concern – in the public interest.

The account which is used to carry forward s.106 payments shows £535,000 carried through to 31st March 2013, in a Freedom of Information document.

Such payments originate from developers who make specific payments under s.106 agreements. £480,000 of the s.106 money that disappeared from the council papers was from off-site affordable housing payments. This is where a developer pays the Council so they don’t have to build affordable housing. These payments, I believe, are the main reason Redcar & Cleveland Borough Council never reaches its full allocation of affordable housing.

In April this year, an appeal process was opened up so that developers could reclaim cash paid to councils for affordable housing. The problem in the courtsaddresses the definition of “affordable”. The previous and current government opened doors to reclaim s.106 payments due to the installation of the Community Levy Regulations 2010. These regulations allow a cross-Borough levy to be raised. All sensible Councils, including Newcastle and Gateshead, are using the Levy to good effect. Instead of using s.106 payments that can be appealed against and raise little money, where all money must be related to a development, the Levy can raise substantial non-returnable cash.

The developer led policy at Redcar & Cleveland – to follow s.106 funding pathways in the Local Plan – was the Plan’s main downfall. Take the proposed South Bank Low Grange Farm, site of 1250 houses. Under s.106 you may raise £2M as a Council – with a Levy, you’ll raise near £17M. The cruellest part of this is that 25% of the Levy goes directly to local people. Imagine what could be done with over £4M in South Bank. Yet the Labour Council was denying the people of South Bank this cash in the Local Plan.

Labour Councillors ignored my pre-meeting emailed advice on installing a Levy and instead pursued s.106 agreements and ridiculous sites prone to flooding, like Marske Inn Farm. In short, payments from developers that were much smaller but, crucially, got paid up front. Now we come to the nub of the Local Plan vote. Labour Councillors were voting for a short term fix to their dire financial predicament – rather than thinking long term; risking everything, our countryside and homes. Just for the Council to stagger into another year of debt.

What of the missing money?

It may be a typographical error – it may be that a developer has appealed the money back.

Either way, I’d appreciate an answer as I’ve not had one, despite asking for s.106 agreements – from Amanda Skelton, the Chief Executive of the Council. 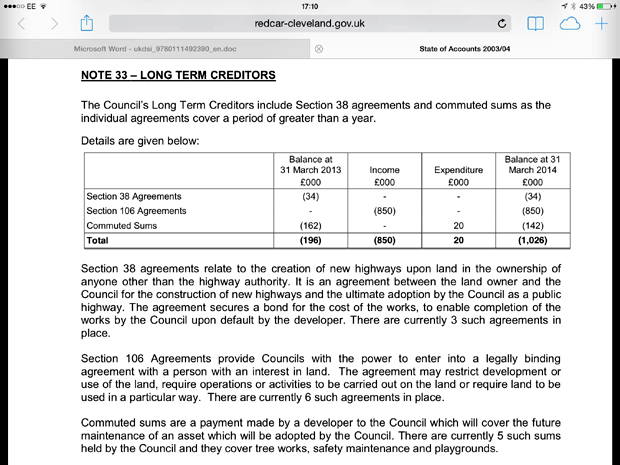 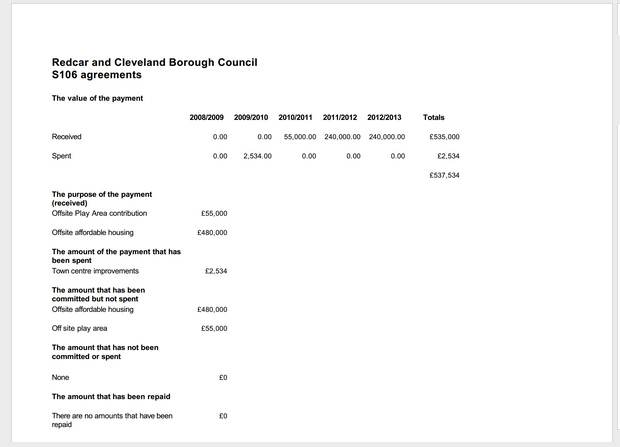