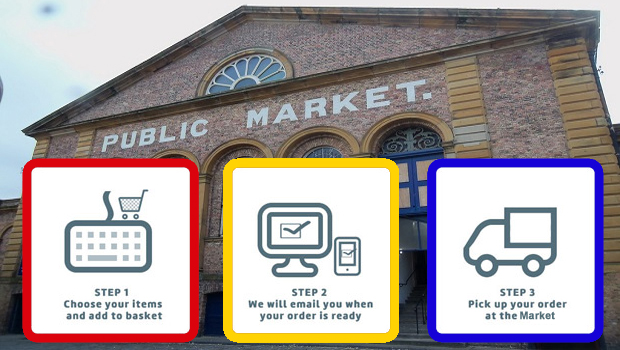 Guest Author ALLAN ROBERTS of Scarborough has been following a member of the public’s efforts to unravel the mystery of the Scarborough Public Market website, with its 21st-century “Click & Collect” online shopping facility.

As many of you will be aware, SBC and Hull University Campus (HUC) have spent around £250,000 to produce a website providing “a 21st-century market place” serving the refurbished and regenerated Scarborough Public Market in the old town.

The plan, first mooted in 2015, was to create a website with online ‘virtual market’ including a “Click & Collect” online shopping system.

So far, there has been no sign of that plan coming to fruition, nor of where and how the money has been spent.

Early in 2017, a concerned member of the public, who was aware that the website was planned to go ‘live’ by June 2016, made the first move in a long and tedious correspondence between members of SBC and HUC when lodging a FOI request to HUC, asking for details of the funding arrangements. (The 18 emails cited in this report are contained, numbered and in chronological order, in an embedded PDF document at the foot of this page).

No response was provided by HUC. However, after contacting SBC via a Councillor, the SBC Officer responsible for drafting the partnership agreement with HUC, Mr David Kelly, provided this information (8th May 2017).

“The website is to be launched shortly. Just refining it.”

Now more confident that the website was in fact going ahead, a polite reminder was sent by the requestor to HUC regarding the unacknowledged and overdue FOI.

Two days later, on 30th May 2017, a response, denying receipt of the original FOI request, together with an official FOI number, 1252, was provided by HUC.

Feeling more optimistic now that at last his FOI had been officially recognised, the requestor sat back and patiently awaited a full response, which was subsequently received on 6th June 2017. HUC denied any knowledge of payment being made by SBC to HUC in respect of the website, with its “Click & Collect” facility. 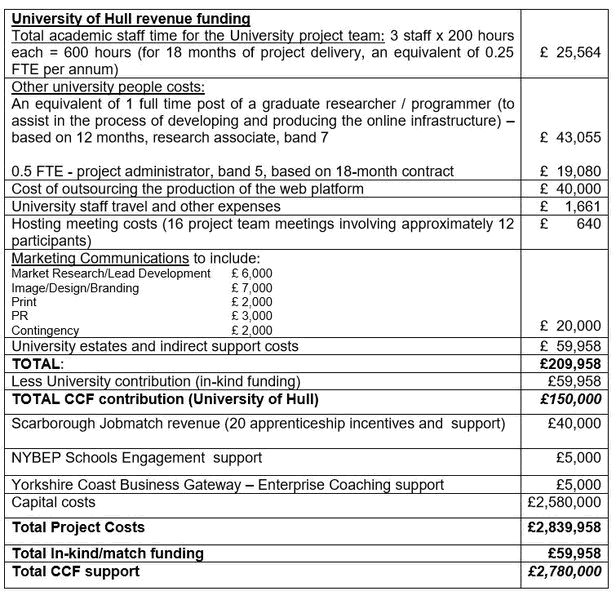 Puzzled by the response, a copy of the Project Costs for the website that was contained within the Business Plan (as provided to, and accepted by, the Coastal Communities Fund via the successful funding bid made by SBC in 2014, and in which HUC are clearly defined as a partner), was provided to HUC.

An immediate same-day response was made by HUC, denying all knowledge of that information, including the references to almost £2.8million funding.

Eager to help Mr Palmer-Dunk, two responses were made to HUC referring to a Scarborough Borough Council document.

There was no further communication from HUC, and so a new FOIA was lodged with that organisation asking once again for information regarding the market website.

Meanwhile on the 22nd June 2017, SBC paid the amount of £8,000 to CREATE ARTS DEVELOPMENT Ltd under the heading ‘Scarborough Market Development’ for ‘Marketing and Website’.

A month passed without response and so, on 20th July 2017, a reminder was sent to HUC.

The following day, a reply of apology for the delay was received from HUC.

There then followed an official response, claiming there was no ‘Click & Collect’ plan, and no details of the funding received, or spent, and advising him to contact SBC or CCF.

Following that advice from HUC, an inspection of the SBC website revealed that, on 7th Aug 2017, a payment of £720 was made to FORWARD THINKER DEVELOPMENTS under the heading ‘Scarborough Market’ and described as a ‘subscription’.

To jog the memory, FORWARD THINKER are mentioned in the previous email as the web design company project-managed by HUC, in collaboration with SBC.

There is also information on the SBC website showing that, on the 16th Oct 2017, another payment of £6,000 was made to CREATE ART DEVELOPMENTS Ltd, again under the heading ‘Scarborough Market Development’ and for ‘Marketing and Website’

Armed with this knowledge, an approach was made, on 20th October 2017, to SBC’s Councillor Bill Chatt, expressing concerns regarding the funding arrangements.

To his credit, Councillor Chatt replied the same day, promising to look into the matter.

True to his word, Councillor Chatt presently replied, confirming that HUC did indeed secure funding from the Coastal Communities Fund, and that it had been spent in part on a “Click & Collect” website, but he could shed no light on the funding aspect – nor did he comment on the amount of money involved.

In consequence, a further email was sent to HUC asking for more information regarding the funding.

No reply was ever received from Hull University and, unsurprisingly – after 18 emails and 6 months of obfuscation – the member of the public apparently threw in the towel.

My interpretation of this thread of correspondence is that Councillor Chatt mentioned more than once that his expectations were – that there will be a “Click & Collect” service on the Market website.

The funding application document written by SBC to CCF states that:

“Click and Collect will be a further option for the customer.”

The same document emphasises the importance of “Click & Collect” as being the key to the development of the Market.

Mr Nick Taylor, Scarborough Borough Council’s Investment Manager (who is no longer in the Council’s employ), stated in the local newspaper:

“We are very excited about the plan. A partnership with students at The University of Hull’s Scarborough Campus in Filey Road is also being discussed.”

“They have created a system that will allow us to introduce an online shopping element to the market. People will be able to log on at home to select what they want from the businesses in the market before they come and collect it.”

All this convinces me that a “Click & Collect” was indeed expected as part of the SBC/HUC partnership, and this is contrary to the FOI 1270 response from HUC, which states:

“The development of a virtual market web platform (which is not ‘click and collect’ system as such) was a part of a collaborative project with the Scarborough Borough Council (SBC).“

It is apparent, when comparing, on the one hand, Councillor Chatt’s response and Nick Taylor’s press statement with, on the other hand, the response from HUC, that there appears to be a lack of consensus regarding what was promised by HUC, and what has actually been delivered (or will eventually be delivered). If you are looking for pork pies, Scarborough Public market looks the place to go.

Among the terms and conditions of the SBC/HUC partnership agreement over the CCF funding are these two:

A total of £259,958 is available to support activities supporting the development and implementation of the virtual market and market intelligence system over the period April 2015 to June 2016, including the £59,958 in-kind contribution from Hull University. Whilst there may be some virement between cost headings the total cost cannot exceed £209,958.

There are still unanswered questions here that need to be resolved, and these will remain open even if/when the “Click & Collect” website for the Scarborough Public Market finally goes ‘live’.

Something doesn’t quite click here – but someone has certainly collected.